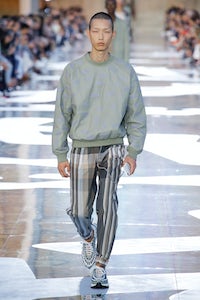 MILAN, Italy — Alessandro Sartori showed his new collection for Ermenegildo Zegna outside, in the grounds of the Milan headquarters of the Mondadori publishing house. Al fresco fashion shows have been a thing for the past month, from Dior’s rain-drenched cruise in Paris to Craig Green’s spring in Florence, but Zegna's felt even more outside. Maybe it was the extraordinary size of the heavens above, huge, infinite, a sky that said Texas instead of Italy. It was laced with a dozen types of cloud, plus a few mile-high contrails. Made me think of airiness and lightness.

Weightlessness. Ta-dah. That was Sartori’s theme. He chose the location because Oscar Niemeyer’s building represented “huge volume without weight” in the architect’s classic style, which made it a concrete correlative of Sartori’s efforts to do the same thing with cloth. And also, the building was originally commissioned in 1968, a watershed year in Milanese design. Sartori feels a similar energy brewing in the city now.

On that optimistic note, he showed a collection that took flight in light. Sartori’s facility in describing the technical feats of the Zegna atelier (he says it’s practically a laboratory at this point) sometimes defies the layman’s understanding, but one stat stood out: jackets in a fabric that weighed 95 grammes per metre vs the conventional 220. Even to the most untrained ear, that sounded superlight. It looked it, too, because the weightless fabrics made Sartori’s expanded silhouettes float. The boxy, flaring jackets, the voluminous high-waisted, double-pleated pants cut on the bias to make them swing felt like a daring evolution of the tailoring on which the Zegna empire was founded. Sartori reconceptualised the suit as well, with a new kind of three-piece: two styles of jacket (a blazer or a bomber) matched to trousers with an elasticated cuff. He introduced an anorak too, as an alternative participant in the threesome.

On the models, immaculately cast to reflect the importance of Asia and Africa as markets emerged and emergent, respectively, the clothes were infused with an instinctive, careless youthfulness, which inevitably raised questions about the reaction of the more traditional Zegna customer, the horror of looking "nouveau young," an obvious bugbear. Sartori used himself as a sounding board, the way his own style has become more athletic. “But not casual,” he insisted.

True, the pull-it-on-and-go ease of the collection celebrated the sport in sportswear, but there was a connoisseur’s delight to be taken in the extraordinary fabrications (again, Sartori’s explanations could drift over the head of a neophyte, but old Japanese looms motored by new Zegna technology impressed as a union that was likely to produce something unprecedented). And it was salutary to see the way in which tailoring could be twisted in such a way that you were still looking at a suit, but it was slightly — though seductively — to the left of what a lot of men would understand by the term. Just as it is increasingly entertaining to watch the ways in which heritage brands adapt to the sneaker revolution, that particular item of footwear being the Trojan horse that has infiltrated and transformed conventional attitudes to menswear. Zegna’s had the expected heft, but, with hand-constructed uppers, the visual interest spectacularly glossed the functionality.

That is Sartori’s trump card. He is obsessed with formal experiment, but his obsession is underpinned by a keen appreciation of function. And that makes a bridge between Zegna’s clienteles, the new and the old. One can love the intriguing, sensual form, the other can enjoy the carefully thought-out utility. And both can look equally good doing it.