SEOUL, Korea — In one of Seoul’s busiest neighbourhoods lies Myeongdong 8-gil, better known to locals as “Cosme Road.” It’s been dubbed as such because of the countless cosmetic stores that line up the street, from The Face Shop, Skin Food and Nature Republic to Innisfree, Missha and Etude House. One brand, however, is unlike the rest.

Talent Cosmetic, which currently operates six stores in the district, sells a range of beauty products from matte lipsticks and BB creams to cleansing oils and sheet masks. In December 2014, it became the first Korean makeup company to obtain halal certification from the Malaysian government. The certification — issued by the Department of Islamic Development Malaysia (also known as Jakim) — identifies products that have been produced in ways approved by Islamic law. Out of the company’s 550 cosmetic products, 147 have received certification.

But why would a cosmetics manufacturer like Talent Cosmetic — largely known for using popular K-pop bands to advertise its makeup and skincare products — be interested in attaining halal certification when Korea’s Muslim population is minuscule? 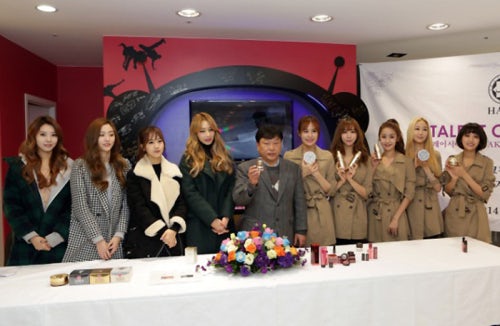 “The latest authorisation from Malaysia has established the bridgehead for us to further expand our business into the Islamic market,” says Kang Sung-Jin, chief executive officer of Talent Cosmetic, at a press conference in Seoul. Clearly, the Korean businessman is now eyeing up the potential in Asian markets further south.

According to the CIA World Factbook, over 60 percent of the population in Malaysia are Muslims, while Indonesia, at 88 percent, has the largest Muslim population worldwide. This demography arguably makes South East Asia the most lucrative regional market for halal cosmetics in the world. “Large Muslim populations based in Asia Pacific and increased consumer disposable incomes in most [of these] countries, such as Malaysia, Indonesia and India, has led to high growth in the halal cosmetics market,” says Vijay Sarathi, an analyst at market research firm Technavio.

This, seen in combination with the affluent Middle East consumer market, makes the global halal beauty category an increasingly attractive opportunity. Sayd Farook, global head of Islamic capital markets at Thomson Reuters writes in his report, ‘The State of the Global Islamic Economy 2015,’ that while global Muslim spending on cosmetics was $46 billion in 2013 — 6.78 percent of global expenditure — it is expected to increase to $73 billion by 2019 and will make up over 8.2 percent of global expenditure. Of this, a significant share goes to the halal segment. According to Technavio, the global halal cosmetics market is valued at $23.4 billion in 2015 and is expected to reach $45 billion by 2020, growing at a CAGR of 14.3 percent.

“Given the latent demand and positive trend, opportunities exist in ingredients manufacturing and global branded concepts of organic and halal cosmetics. [There is] an opportunity for many conglomerates to take a leadership role in developing this space,” says Farook.

Striking a balance between faith and beauty can be tricky for some Muslim women. Unlike halal food, which is considered a must for most practicing Muslims, the use of halal cosmetics is not universally enforced in Islam. This is compounded by the fact that the niche has long been ignored or misunderstood by mainstream cosmetic brands worldwide. So, what constitutes as halal-compliant?

“A key aspect to understanding halal is that it is a holistic approach to life for Muslims, [rather] than just a list of ingredients that are allowed or not allowed for the followers of Islamic faith,” explains Oru Mohiuddin, senior analyst, beauty and personal care at Euromonitor International. “Halal is one of five tenets signifying morality, ranging from fard (compulsory), mustahabb (recommended), halal (allowed), makruh (disliked) and haram (forbidden).”

One common interpretation of Islamic law is that halal cosmetics must not contain any parts or substances of forbidden animals, such as pigs and dogs; must be handled with clean utensils; and must be made with materials that are not harmful to humans. But, continues Mohiuddin, “given that halal denotes an overall way of life, the concept of what constitutes as halal cosmetics goes beyond the formulations to include manufacturing, packaging, distribution and logistics.”

To date, Malaysia’s Jakim recognises 73 halal certification bodies and authorities globally that are authorised to certify products according to halal standards. In the nations of the Middle East, there are also attempts to unify halal safety under new authorities. In 2013, the United Arab Emirates Standardisation and Metrology Authority finalised unified halal codes for perfume and cosmetics. “[The] new system in place will not [only] be a point of reference for firms in the UAE, but also for other Islamic nations,” Mohammad Saleh Badri, director-general of the authority, said in a statement.

As the boundaries of halal are often blurry when it comes to cosmetics, those making a mark on this sector tend to be smaller companies set up by entrepreneurs who felt they couldn’t find a halal-compliant product on the market for themselves. “So far, the halal beauty market is dominated by niche players,” says Mohiuddin. 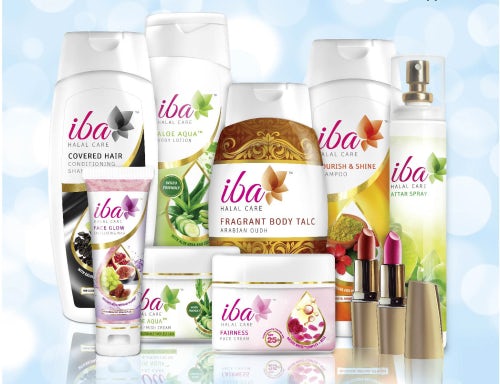 One such company is Iba Halal Care, the first halal-certified cosmetics brand in India, a country where Islam is the second largest religion (after Hinduism). A Pew Research Center study shows that by 2050, India will surpass Indonesia to have the largest Muslim population of any country in the world. Founders and sisters Mauli and Grishma Teli spent six years researching and building their first company, Ecotrail, before launching the first Iba Halal Care store in September 2014.

Their success has been swift. In just a year, Iba — which offers over 80 halal-certified products, including lipsticks, face creams, body lotions, hair oils, shampoos, deodorant and fragrances — has grown from its first standalone store in Ahmedabad to a franchise network around India and global online stockists like Amazon and Flipkart. “The fact that they are dedicated only to halal ranges has helped to muster consumer confidence,” says Euromonitor’s Mohiuddin.

Muslim communities in the West are also providing opportunities for niche players. Amara Cosmetics, launched in 2011, is the first company in North America to provide halal-certified cosmetic products manufactured in the US. Founder and chief executive Shamalia Mohamed hoped to create a cosmetics brand that Muslims can easily purchase, without having to read the cosmetic labels before buying. “All of Amara’s cosmetic products are manufactured and packaged in California, and are certified by the Islamic Food and Nutrition Council of America (IFANCA), a not-for-profit halal certification organisation,” she explains.

“Sales of [halal] products in the US have increased around 80 percent every year, thanks to an increasing number of new retail outlets specialising in halal products,” says Technavio’s Sarathi. “In Europe, halal cosmetics are progressively available in specialty halal shops and on the internet. They are even sold inflight aboard certain airlines like Saudi Airlines.”

There are a handful of other small and medium-sized specialised manufacturers such as Wardah and OnePure Beauty, which use all-natural ingredients like rose petals, pomegranate, kalonji oil and vegetable butters in their halal cosmetics formula, and are sold through leading department stores like Galeries Lafayette. Not only are these brands clear that their products are halal-friendly, but they also reflect the lifestyle of the audience they’re speaking to, says Shelina Janmohamed, vice president at Ogilvy Noor, an Islamic branding and marketing consultancy.

While the market may be dominated by niche players, some multinational firms are dipping their toes into what could become a lucrative market. Japanese cosmetics maker Shiseido obtained halal certification in Vietnam in 2012 and has started selling 28 halal skincare products under the Za brand in Malaysia. “We are still evaluating this test launch to make decisions for our future plans,” says Shiseido spokesperson Tatsuyoshi Endo. American makeup firm Estée Lauder has several products listed on the Muslim Consumer Group website as halal, while Colgate-Palmolive sells oral care products such as toothpaste and mouthwash with a halal stamp.

However, Sarathi warns that it is important to acknowledge that there is a wide diversity in awareness and adoption of halal cosmetics and pharmaceuticals within the core Muslim customer base around the world. The global Muslim population is not a homogeneous market and unlike cultural consumer segments, it is made up of a myriad of socio-cultural subsets that have been influenced by migration and adaption to different social contexts. 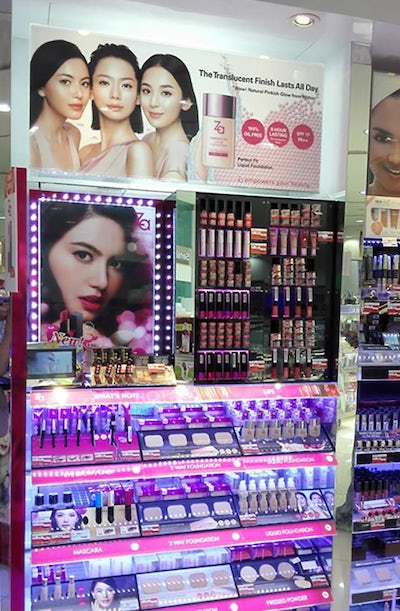 This has resulted in today’s diverse mix of Muslim consumers, who each have a unique value system and different interpretations of Islam. “Therefore it is necessary [for multinationals] to develop a good understanding of Islamic rituals… As far as consumer perception goes, halal extends to the overall philosophy of the company and all the other brands and ranges it markets,” adds Mohiuddin.

“Halal implies the safety of ingredients and the process. With this being said, halal cosmetics are [increasingly] used by people who want to wear makeup safely and decrease harm to their skin, often caused by non-halal ingredients such as alcohol,” says Indonesian fashion designer Dian Pelangi, who has been using halal cosmetics since high school.

“It is so important to be good to your skin and know what it is exactly that is in your cosmetics. But many beauty bloggers don’t talk about halal cosmetics like they do with other global makeup brands,” says Anum Bashir, the Doha-based blogger behind Desert Mannequin and fashion director for the Qatari boutique Per Lei Couture. “There are not enough halal beauty players in the market to take the attention off big players in the industry. The brand name is important to them. If Tom Ford did a collection of halal makeup, it would sell out here in seconds.”

Market observers believe that halal cosmetics are also gaining popularity with some non-Muslims. “While the global Muslim population is forecast to grow at a rate of over 50 percent until 2050, factors such as the rising trend of ethical well-being and overall health and wellness will make halal cosmetics and personal care products mainstream,” says Sarathi.

As with the organic and Fairtrade movements, the halal cosmetics market is full of ambiguities that present unique challenges. One such issue is the lack of a unified global halal certification body to regulate the industry. Halal products are usually approved by local or regional certification agencies to ensure that they meet Islamic rules. In Europe and the US, certification is often carried out by third parties, and globally there is a lack of standardisation between bodies and regions.

Another difficulty faced by multinationals and local players alike is the restrictions and higher costs associated with developing and manufacturing halal products. According to Sarathi, the narrower parameters make it more difficult for smaller halal brands to compete against big brands.

Mohiuddin agrees: “Regulations are stricter and the need to attain certification adds to the cost. Given that formulation is quite rigid in terms of the ingredients allowed, brands need to rely on natural and organic ingredients, which are limited in supply and hence more expensive,” she says.

Still, while halal-consciousness in cosmetics presents several challenges, many firms see an opportunity that can’t be missed. But in order to stand out in a growing market niche, cosmetic suppliers and manufacturers need to do more than just gain the confidence of consumers by meeting the complex nature of halal compliance.