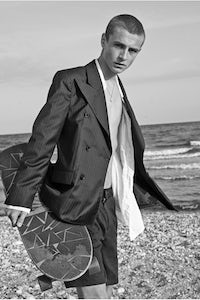 LONDON, United Kingdom — For Gosha Rubchinskiy, streetwear is the new music. Indeed, much like cult bands in the era before Spotify, the t-shirts, sweatshirts and sneakers made by skate-inflected labels like his own attract legions of loyal fans who see them as physical markers of affiliation and catalysts of community experience. Indeed, lining up for the latest Supreme drop is a lot like what lining up for the latest album from your favourite band used to be.

“Brands like Supreme and Gosha replaced musicians,” said Rubchinskiy. “Before, teenagers had a favourite band and they waited to be the first to get new singles. Now, you do not need to go to stores to buy records. But I think people still want to have objects. They buy t-shirts not as clothes, but as a fan piece or something collectable.”

Now, Rubchinskiy and Adrian Joffe, president of Comme des Garçons, which operates the Gosha Rubchinskiy label, are gearing up for the release of what the designer calls his “new single”: a fragrance inspired by “the streets of Moscow.” While the streetwear market is flooded with t-shirts and sweatshirts, there are currently very few perfumes linked to the lifestyle. “They don’t want to use Armani or something. They want something closer to their culture,” explains Rubchinskiy, referring to his fanbase. “The new single from Gosha is perfume. Something we use. One more reason to go to the store and collect something.”

They don’t want to use Armani or something. They want something closer to their culture.

The streetwear market is no stranger to scent. Since 1993, incense label Kuumba has created incense and home scents for labels like Stüssy and Neighborhood. In 2009, Hiroshi Fujiwara founded retaW, a line of fragrances and grooming products. And while Stüssy has never released a fragrance of its own, in 2011, the company partnered with Los Angeles-based perfume brand A Treatise On White Magic on two limited-edition fragrances.

Two years ago, Comme des Garçons itself collaborated with singer-songwriter Pharrell Williams on “Girl,” a fragrance named after his latest album and housed in a bottle designed by KAWS. Meanwhile, earlier this year, A Bathing Ape, the streetwear label founded by Nigo and now owned by Hong Kong-based I.T, also entered the fragrance market with a sandalwood-scented eau de toilette. But there is still plenty of white space at the intersection of streetwear and fragrance. 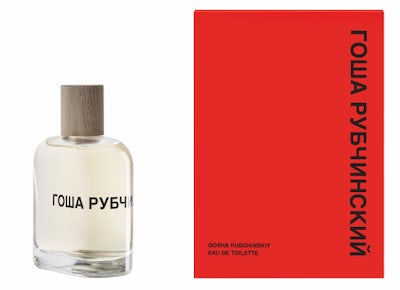 Rubchinskiy worked with Christian Astuguevieille, creative director of Comme des Garçons Parfum, on developing a scent inspired by what the designer described as “young people hanging together, skating together — concrete and skateboards.” The bottle is clear glass in a classic shape, but the cap is made of wood, a nod to a skateboard deck. The packaging — a bright red box with Cyrillic script — was inspired by Red Moscow, a Soviet-era perfume.

“Gosha came to us with his own world, different traditions from his country, but the ideas conveyed are very global,” said Astuguevieille. “Skate and street culture are international. Kids from all over the world can relate to it in the same way.” The scent — which will retail for €76 or $88 — mixes top notes of angelica root and buchu, mid-notes of mandarin seed and chamomile, and dry scents of styrax, Haitian vetiver and patchouli. “Gosha’s perfume is a very modern fragrance. We wanted to create a scent that appealed to today’s youth, something that would match their desires. It is very in the now,” added Astuguevieille.

The new single from Gosha is perfume. One more reason to go to the store and collect something.

While luxury megabrands like Louis Vuitton and Burberry are investing significant resources in developing their fragrance offering in-house, most fashion houses work with specialist companies like Inter Parfums, Coty and L'Oreal, which pay royalties to license popular brand names, while keeping the proceeds from sales. In 2002, Comme des Garçons, whose fragrances can be highly conceptual and come with bold manifestos, entered into what Joffe calls a “partial licensing” agreement with Barcelona-based Puig. “We do the perfumes, we do the boxes and Rei Kawakubo does all the graphics, and they produce it and sell it only to fragrance stores,” he explained. “We divided the logo. We gave [Puig] Comme des Garçons Parfums, but we made a new label, Comme des Garçons Parfums Parfums, for all the weird things.”

Rubchinskiy’s new fragrance was created in-house, outside of the Puig agreement, and will launch at Dover Street Market London and the Comme des Garçons Trading Museum and Comme des Garçons Parfums shops in Paris on October 8th, followed by Dover Street Market New York and Dover Street Market Ginza in Tokyo at the beginning of November. In January, the fragrance will be distributed via select third-party stockists that are yet to be announced. “We don’t want to sell to perfumeries. We won’t do any stupid, popular, cheap perfume,” said Joffe. “We don’t need to sell lots and lots of perfume. Mostly, it’s a way of expressing and telling the story. We’re not interested in making commercial perfume.”

Content plays a big role in imbuing Rubchinskiy’s label with significance and the launch of the fragrance will be accompanied by the release of a volume of photography dubbed “The Perfume Book.” “We need to have something visual to help explain and [communicate] the image,” said Rubchinskiy. “I am a fan of objects. I like to buy books; photobooks and art books. So I thought, if we do perfume, let’s do a book. I think it’s good to have something tangible.”

“Younger consumers are saying that they want more fragrances. They also want fragrances that make a statement,” said Karen Grant, global beauty industry analyst at NPD. Meanwhile, according to Grant, the market for cult fragrance-only brands, such as Byredo and Le Labo, is growing by 50 percent annually, prompting a flurry of acquisitions by companies like Esteé Lauder, which bought Le Labo and Editions de Parfums Frédéric Malle in 2014, and Manzanita Capital, owner of Diptyque and SpaceNK, which bought Byredo in 2013.

Comme des Garçons generates about €280 million ($310 million) in total annual revenue, of which only about €5 million comes from fragrance. Yet Joffe called the business “extremely profitable.” The company will produce a first run of 18,000 units of the Gosha Rubchinskiy fragrance. “I feel confident,” said Joffe. “Normally, maybe I would make 10,000 to 15,000 to start with. With this, I’m confident making 18,000. I expect it to sell 50,000. We are already thinking about the second one — but Gosha is not Pharrell yet.”