TOKYO, Japan — The Shiseido flagship store in the upscale Tokyo neighbourhood of Ginza is buzzing with customers. One recent afternoon, it even became crowded and chaotic, with shoppers elbowing each other to test silky hand creams and white mushroom jelly face lotions at the new retail space, rebranded as ‘Shiseido The Store,’ which reopened in January after months of renovation. The site, which is also the location where Shiseido’s first cosmetics business was established, occupies four levels, each with a different purpose.

The company currently operates about 100 beauty brands, ranging from prestige to mass, in Japan and throughout Asia, while globally there are five brands and six fragrances under its umbrella, including Issey Miyake, Azzedine Alaia, Dolce & Gabbana and Elie Saab. But on entering the store at street level, only Shiseido’s prestige brands — Clé de Peau Beauté and Shiseido — are present.

The many other labels — Elixir, Playlist, Prior, Maquillage, Benefique, Posme, Joico, Waso and more — are displayed further up on the second floor, where there is a large counselling space and “beauty cabins,” private rooms used for more detailed advice and product trials. The third floor is dedicated to specialist services, including a luxury spa and hair and make-up salon, while the fourth is home to a new café and event venue, called ‘Shiseido The Tables,’ which opened in February. 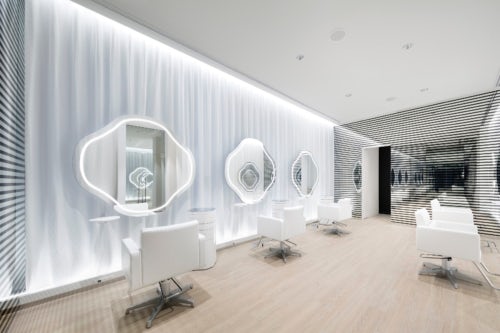 The new layout reflects the vision of chief executive Masahiko Uotani, who is working on shifting the group’s strategy “towards prestige first,” explained Yoshiaki Okabe, Shiseido’s chief brand director and group corporate officer, noting that there was previously confusion among customers over the brand messaging and direction. “Now, when customers enter the store, we hope they will experience a more luxurious feel.” It certainly looks more luxurious, thanks to design by Oki Sato, head of design at Nendo, and designer Keita Aono, while maintaining its storied past. Visible on the floors and ceiling of the store is the Camellia-inspired Hanatsubaki logo, a symbol that has long represented Shiseido.

Founded in 1872, Shiseido is now the second largest cosmetics company in Japan after Kao, owner of the mass-market cosmetics brand Kanebo, and the fifth largest cosmetics company in the world. In addition to its fragrance portfolio, Shiseido owns several international beauty brands like Nars and Laura Mercier. It is hard to dispute the claim that Shiseido is one of Japan’s most well-known global success stories. Yet the company is facing several challenges.

For the fiscal year ended December 31, 2017, profits dropped almost 30 percent to 22.7 billion yen ($207.9 million). Shiseido also incurred a loss of 55.2 billion yen in relation to Bare Escentuals, a line of chemical-free mineral powders, which has struggled since it was acquired by Shiseido for $1.7 billion in 2010.

The dismal results come despite that Japan’s beauty industry is enjoying renewed optimism after having lost some of its shine to “K-Beauty” over the past decade. “J-Beauty” exports grew 28.8 percent year-on-year to 267.6 billion yen ($2.4 billion) in 2016, exceeding beauty imports for the first time, and are expected to surpass Korean beauty exports at 300 billion yen ($2.75 billion) in 2017.

“Some people have the image of Shiseido as being a mother’s brand,” Okabe acknowledged, conceding the company as “a sleeping beauty” that has yet to fully reap the rewards of Japan’s beauty industry. In its home market, where the beauty industry is worth $36.1 billion, according to Euromonitor, Shiseido lacks the glamour of foreign brands like Chanel and Dior in cosmetics, but it is considered a solid, trustworthy brand with a place on most Japanese women’s beauty dressers.

K-Beauty is very speedy to get new product to market but it’s also superficial. Japanese beauty is not a trend.

“As foreign people show greater interest towards Japan, this opens an opportunity for the Japanese beauty industry to gain greater recognition,” said Kyoko Muramatsu, beauty editor of Vogue Japan. Shiseido is well placed to tap current market movements, she said, by continuing “to export Japan’s aesthetic sensibilities and beauty rituals together with its cosmetics.”

Domestically, there’s also never been a better time, as economic conditions in Japan continue to recover. The local cosmetics market is also firm, growing at 1.8 percent on average year-over-year, according to Euromonitor, thanks to inbound demand supported by the continued increase in overseas tourists to Japan.

Shiseido was founded as Japan’s first Western-style pharmacy in 1872. Founder Arinobu Fukuhara, who was educated in Western medicine and had been a chief pharmacist to the Japanese navy, was dissatisfied with the quality of Japanese medicine and set up the company with the aim of improving medical and dispensary practices. When he introduced Japan’s first toothpaste, the product was an instant hit. But Shiseido didn't enter the cosmetics arena until 1897, when it launched "Eudermine" (derived from the Greek word "eu" meaning "good and "derma" meaning "skin"), a softening lotion, followed by a range of seven coloured face powders in 1917. 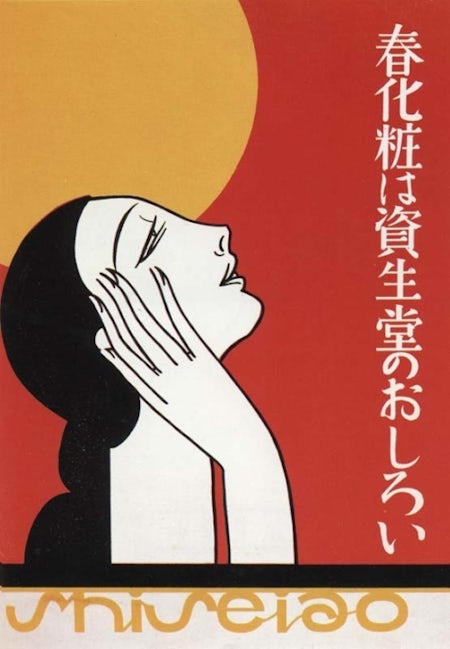 The only other global Japanese beauty brand with as extensive a heritage is Shu Uemura, founded by the eponymous make-up artist, who developed his first cosmetics product, a cleansing oil, in 1960 — and it remains popular to this day, along with its eyelash curlers. But Shu Uemura lost its way following the 2004 acquisition by L’Oréal and the death of Mr. Uemura in 2008. In 2010, the company quietly withdrew from the US and in 2017, it closed operations in the UK.

Yet, Shiseido flies under the beauty radar by keeping its rich history under wraps. (In Japan, it is considered in bad taste to be boastful or talk about oneself too much.) So, it tends to whisper in its marketing and as a result, many beauty innovations and skincare advances get lost in the competitive beauty space. The company also faces tough competition from buzzier, niche J-Beauty brands like Shiro, Decorté and Sensai. “On a global basis, smaller Japanese brands are taking share,” said Ali Dibadj, senior vice president and managing director at Sanford C. Bernstein & Co. “Shiseido has not become a true global brand like many of its prestige competitors.”

Still, Shiseido has had its eye firmly on its goal of transformation and the 146-old-company is making moves in the right direction, having surpassed 1 trillion yen ($9.17 billion) in sales in 2017, a target originally set for 2020. According to the Okabe, Shiseido plans to increase operating profit by 50 percent from fiscal 2017 levels to more than 120 billion yen ($1.1 billion) in fiscal 2020. It’s part of the company’s mission to inject growth and raise profits, which involves a lengthy to-do list unveiled in December 2017 as a strategic plan called “Vision 2020.”

“Kao is ranked as number one [in Japan] right now, but we will take that title back by the end of 2018,” he claimed. But it takes more than a list of goals and a plush downtown renovation to modernise a heritage beauty business. How is Shiseido planning to turn things around?

The appointment of Shiseido chief executive Masahiko Uotani in 2014 has been significant, said Okabe. “That’s when we started shifting our brand image as well as our internal values.” When Uotani, formerly CEO of Coca-Cola in Japan, took the helm, he was the first outsider to lead the Tokyo-based beauty business and its 45,000 employees. (Since its inception, Shiseido has been managed by individuals groomed from the inside, which is common in Japanese corporate culture.)

At Shiseido, the bottom line wasn’t the only thing that was suffering. Employee morale within the company was reportedly low. Inspired by his tenure at Coca-Cola, where he reported to executives of varied nationalities and backgrounds, Uotani saw this as an opportunity to reinvent Shiseido as a more cosmopolitan brand by implementing a more global company culture.

One of his first significant changes at Shiseido was insisting that English become a common language in the office by 2018. A surge of employees are now said to be picking up the language. Uotani also looked outwards for inspiration and key on his agenda was greater diversity. The executive made a point to employ more leaders from different backgrounds and nationalities; today, Shiseido has 68 nationalities working in its offices worldwide — a significant step for a company based in a famously homogenous country.

We are growing rapidly and it almost feels too fast for us to catch up.

Uotani’s Westernised approach to management is already helping to boost the bottom line. Although profits fell during the same period, Shiseido reported that global sales increased 16 percent in 2017 over the year before on a local currency basis. In Japan, sales grew by 13.1 percent year-over-year to 431 billion yen. In China, Shiseido’s single biggest overseas market, brands like Clé de Peau Beauté and Ipsa leveraged its “made in Japan” appeal and recorded 20.1 percent year-on-year sales growth on a local basis to 144.3 billion yen ($1.32 billion), while sales for the rest of Asia Pacific grew 11.2 percent.

According to Okabe, Shiseido’s franchises outside Japan were doing well thanks in part to its worldwide reputation for advanced research and development. (Shiseido was the first company to formulate and synthesise hyaluronic acid, now popularised by brands like The Ordinary.) Today, Shiseido’s best selling products are the Ultimune Power Infusing Concentrate, an $89 serum designed to strengthen skin against day-to-day damage and signs of aging, and Essential Energy, a $72 hydrator aimed at counteracting dullness, dryness and the appearance of fine lines.

“That kind of neuroscience-based product also appeals to millennials,” Okabe added. In June 2017, the company launched a pared-down millennial skincare range called Waso. Fusing modern technology and natural ingredients, the line was created out of “millennials’ need for immediate efficacy,” said Okabe. “They want immediate results and they want to understand what is hindering their skin condition.” In February 2018, fast-beauty brand Pico was launched across 200 stores in Japan, offering mini-sized make-up in a wide range of colours and textures. “We’re responding to immediate market trends that appeal to young people,” he added. 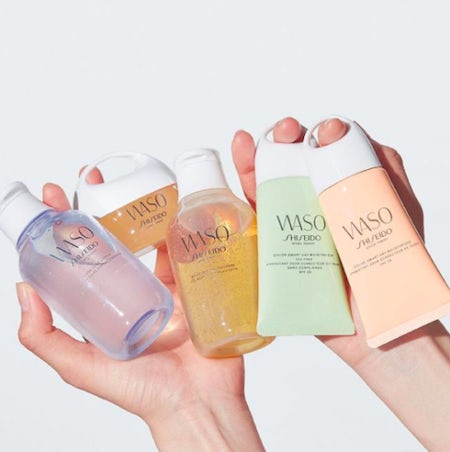 “Innovation is the most important thing for us this year,” Okabe continued. “However, we are also growing rapidly and it almost feels too fast for us to catch up.” To keep supply up with demand, Shiseido announced it would build the first new Japanese factory in almost 40 years in Otawara, in the Tochigi prefecture, which will produce 120 million skincare products annually. The cosmetics giant is investing about 40 billion yen ($366.8 million) on the new site, which is slated to start production in 2019. The new factory will complement the company’s planned new 55 billion yen facility in Osaka, which is due for completion in 2020.

Omnichannel is also a big part of Shiseido’s strategy. “We are building and delivering a best-in-class customer service supported by omnichannel. Once we succeed in realising these two elements, we will be able to rejuvenate Shiseido and make it more modern,” Okabe said.

In March, Shiseido made an undisclosed, minority investment in Violet Grey, the online luxury beauty retailer that Amazon was rumoured to partner with. The deal offers Shiseido an opportunity to observe Violet Grey’s e-commerce strategy, which uses editorial content like celebrity interviews and tutorials to promote its selection of prestige beauty products from brands like Tom Ford and Byredo.

“This area of digital is the biggest opportunity for Shiseido,” said Okabe, stressing the importance of e-commerce. The company is planning more than 300 billion yen ($2.83 billion) in capital expenditures through fiscal 2020 and aims to nearly double online share of sales in three years.

Shiseido has also made a handful of key acquisitions including MatchCo and Giaran, as well as second-skin technology from Olivo Laboratories. The acquisition of such companies, said Bernstein’s Dibadj, “will help them grow, much like L’Oreal and Estée Lauder have done.” However, he warned that Shiseido must “balance the need to acquire and reinvest with the margins of the core business.”

Okabe believes that the strength of Japanese culture is an asset to Shiseido and will continue to appeal to its customers. “We have a unique brand value focused on Japanese tradition. K-Beauty is very speedy to get new product to market but it’s also superficial. Japanese beauty is not a trend. It’s something that is more sustainable and authentic,” he said.