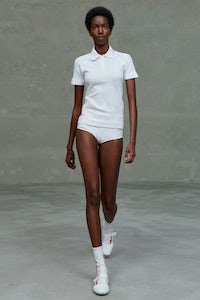 LONDON, United Kingdom — It was billed as The Show That Never Happened.

That had a dramatic ring. Made you wonder what we might have missed in the real world. What we got instead was five video presentations, artists’ interpretations, like five sets of eyes in a show audience. Smart. We’re all too familiar with the way in which a single event can be refracted through as many perceptions as there are people viewing that event. So The Show That Never Happened actually happened at least five times.

And it confronted us with the question we’re getting from everywhere: What will people want from fashion when the world regains some kind of equilibrium? “People say, ‘Let’s have fun’,” Miuccia Prada mused. “Of course I understand the idea of having fun for one evening. I did it myself at home. My husband and son were in Tuscany, I was in Milan, there was a birthday and we put chandeliers on the table. But if you want to have a moment of distraction, of fun, it can’t be the whole thing in your life, at least for me. It’s not a contradiction, but the dominant feeling for me was more thinking, reflecting, something more intimate, human.”

For our “post-show” Zoom, Miuccia was seated in front of a huge screen, in a room where Prada executives would usually be conversing with their counterparts around the globe. When I asked her if she’d acquired any new skill during quarantine, she indicated the screens that surrounded her. Banal, she said, but she’s got used to technology, and the connectiveness has suited her. “I’m alone at home, I have a little garden and it’s so peaceful, if it was not for the fear and the news,” she said. “At the beginning, I spent three hours a day watching the news.” But now, Miuccia’s connectivity allowed her to sit in a room and talk to twenty scientists for the enormously complicated project her Fondazione is embarking on.

She acknowledged we’ve all been living through an enormous historical event. “We will not be the same.” In terms of lessons learned, she wasn’t so sure. The biggest lesson? “Politicians should learn something, which I doubt. The cliché of people coming together, that’s what impressed me the most. And politicians don’t understand that.” Still, Miuccia said it was politics that had obsessed her the most during the ongoing crisis. “My hope for Europe lives in most of my thinking.”

Thinking. Everyone’s been doing a lot of that during lockdown. And, like many other creative people in the current situation, Miuccia found reflection taking her back to the fundamental question: Why? Fortunately, the answer she came up with was the sheer joy of her job, “the pleasure of doing meaningful clothes”, shorn by Covid of the attendant song and dance, all the PR doo-dah that has become such a distraction. “I wanted to work in instinctive way,” Miuccia said. “Intellectual honesty, let’s not pretend we’re different from what we are.”

Her engagement was obvious in the clothes she showed. It felt to me like she had been challenged to define the essence of Prada. “We’re always criticised for changing too much,” Miuccia said with a dry laugh. She mentioned the recent digital project where customers were invited to define Prada in their own words. This was her own response, although she did mention that an assistant had pointed out that she shouldn’t be too definitive because that would turn her efforts into one more fashion moment. Again, the dry laughter.

But she couldn’t emphasise enough the fact that the stand-in for the show that never happened was her plus others. Maybe there was some original notion that it would happen in real time, with a real audience, but once that was knocked on the head, she surrendered to the vision of the five film-makers. “I’m not a director, I’m a fashion designer and it’s an interesting point to enlarge.”

And it was an interesting point to see how the five approached the collections. Willy Vanderperre filmed the clothes in motion, emphasizing their lean monochrome nature: the black suit, the white shirt, the stirrup pant under the slim coat. The industrial backdrop of Juergen Teller’s film underscored the tech fabrics, the black nylon that is Prada’s spine, empire-waisted in one dress, white-lace-trimmed in another. Joanna Piotrowska focused on Prada’s paradoxical combination of romance and utility: the contrast of a taffeta balloon and a stolid worker’s suit. Martine Syms staged her film in a Covid-emptied theatre, the models scrambling in lingerie, innerwear as outerwear, a single cheeky flash of a model’s gold tooth. And artist Terence Nance, trailing awards for his HBO series “Random Acts of Flyness”, made a movie with Prada’s high performance Linea Rossa sportswear that ended with a fluttering spinnaker of gold foil casting a glow over the young models. As the last film in the sequence, it offered an oddly optimistic climax to The Show That Never Happened.

“I am optimistic,” Miuccia insisted, though she’d inevitably considered how the world was after the last catastrophes, the wars, the pandemics… “The biggest difference was that people were much more innocent, more naïve and the reaction of reconstruction was very easy. Now, there are so many haters, so many complications. I don’t see that kind of beautiful moment, people dancing in the street at the end of the war. You don’t have a feeling of happiness at all. This is not finished. People are scared.”

Which is why one moment in her collection struck such a chord. This was Miuccia’s last collection before Raf Simons is integrated into the Prada family. “I started work with him one week ago,” she said. “He was afraid in his home and I was afraid in my home.” But if she had laid out her own clear baselines with her new collection, the lookbook offered one vision that pointed to the potential of the collab: Anok Yai in a blush-pink clutch coat, a distinct echo of one of Raf’s most emotional moments during his tenure at Jil Sander. Pulses raced at the sheer beauty.

The images in this review, courtesy of Prada, are not the full Prada Spring/Summer 2021 collection. 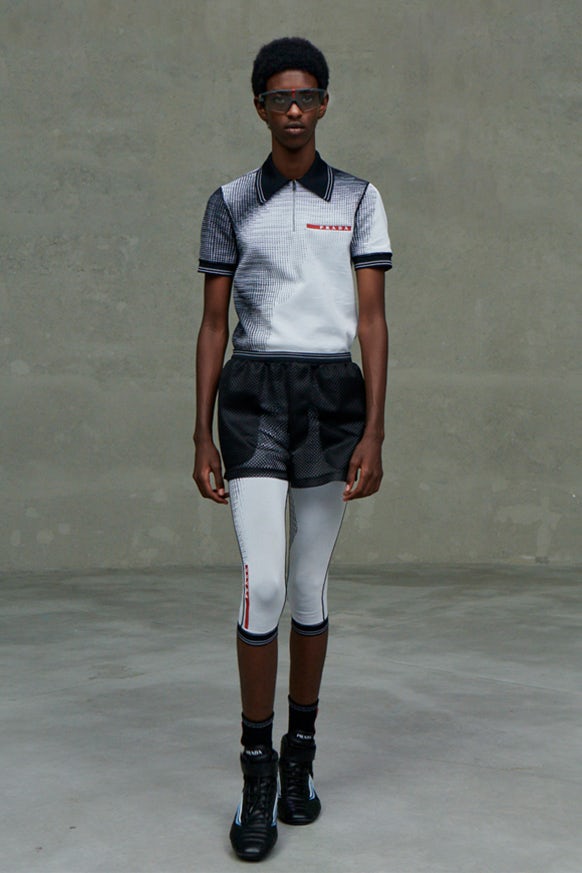 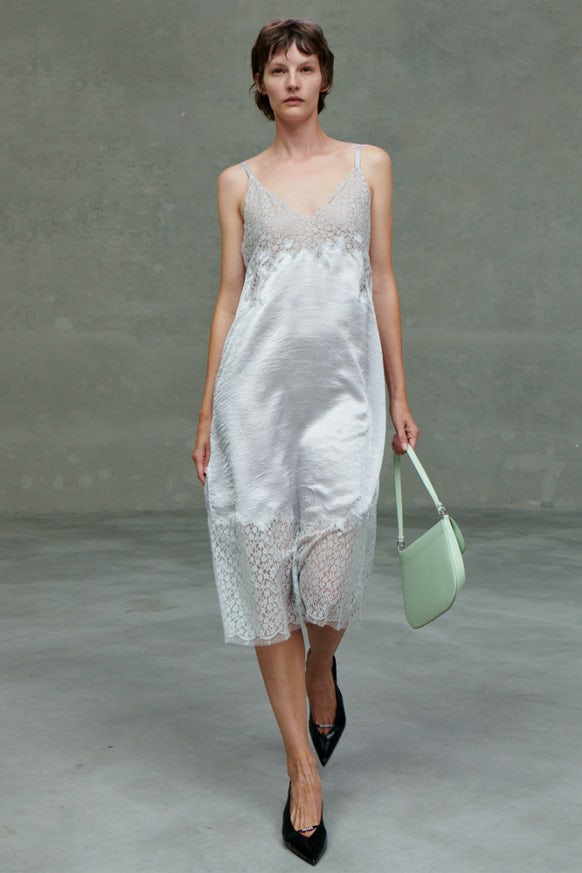 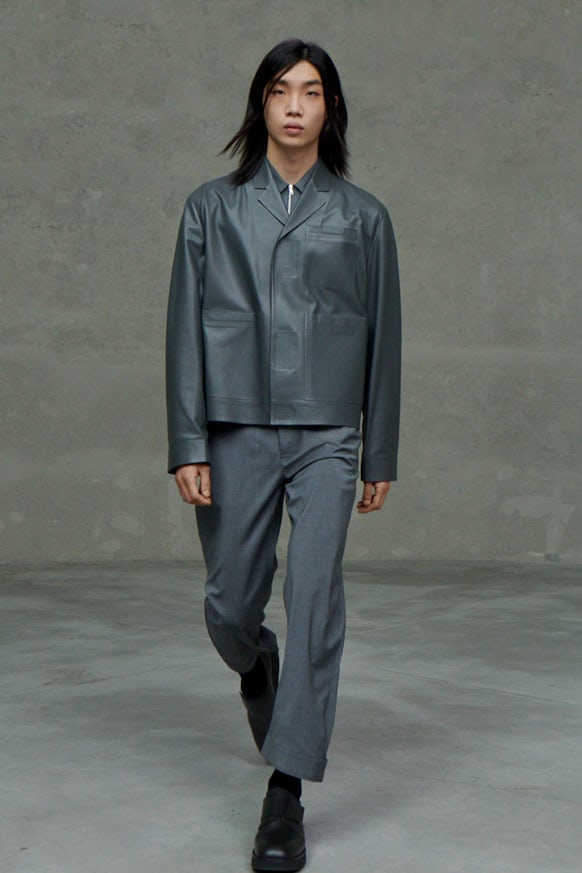 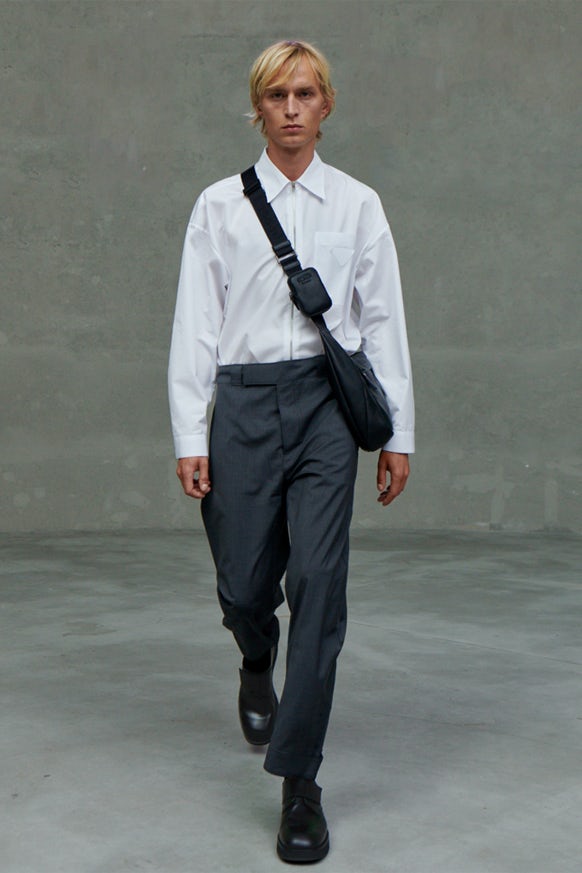 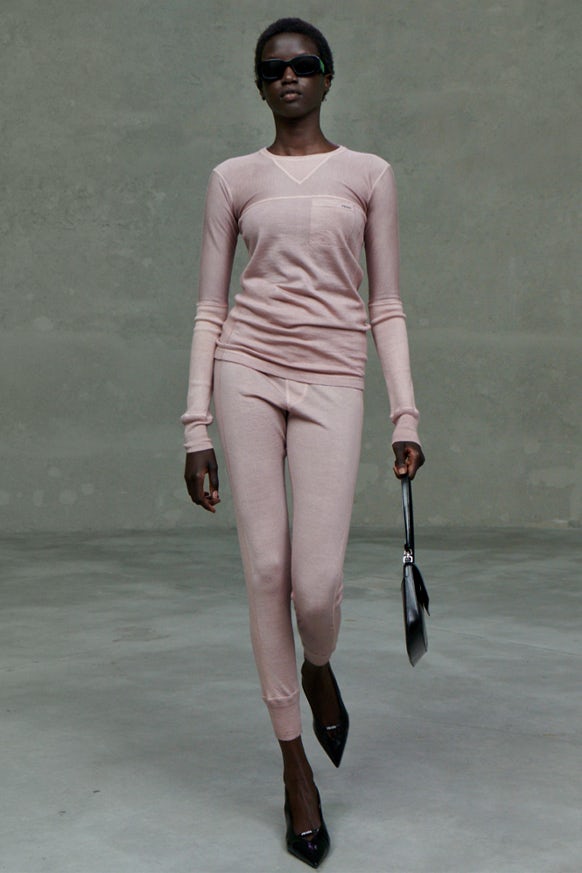 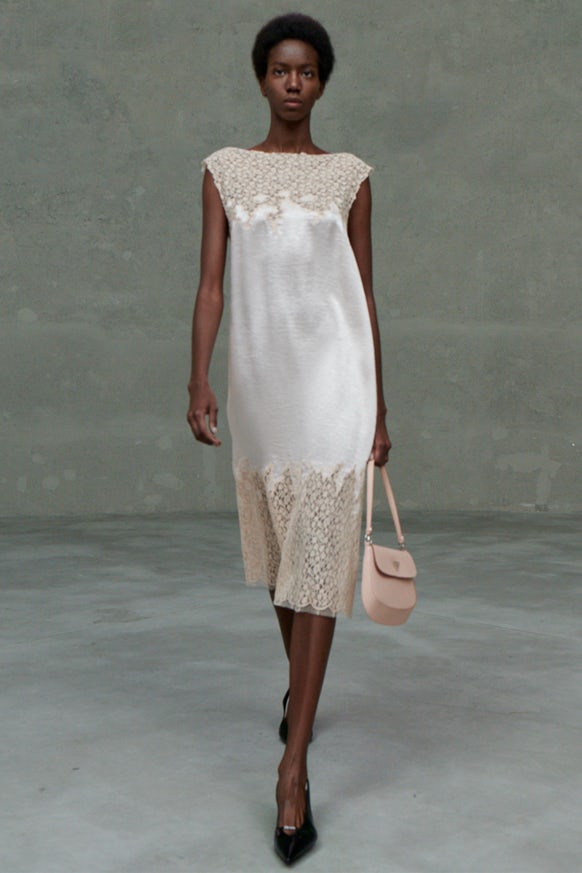