PARIS, France — As a nominee for this year’s ANDAM awards, Stephane Ashpool’s label Pigalle is competing against Umit Benan, Pallas, Anrealage and Vetements for the prize of 250,000 euros (about $275,000), a capsule collection with thecorner.com, a one-year mentorship with Bruno Pavlovsky, Chanel’s president of global fashion and around 10,000 euros worth of Swarovski crystals. At 32 years old, Ashpool is relatively young and his label is easily the outlier in this year’s crop of ANDAM nominees. When first asked to participate, he admits he was a bit reticent, as he knows he’s coming into the competition as an outsider.

“It's not really my world,” admits Ashpool, who sees ANDAM as an opportunity to legitimise his vision, grow beyond his associations with “streetwear” and cement himself as a bona fide fashion designer. “The new ‘streetwear’ that we talk about, I think [those brands] leave their idea to someone and someone just makes it happen. I don't do that,” he says. For Ashpool, who founded Pigalle in 2008, it was trial by fire, taking on the demanding process of creating a full collection, each season, by himself. “After seven years and lot of hard work, now I know how to do pattern making, I know how to do many of the stuff — all the fabrics, everything. It's made entirely from me and my ideas and my own head and I think almost no one knows that.” 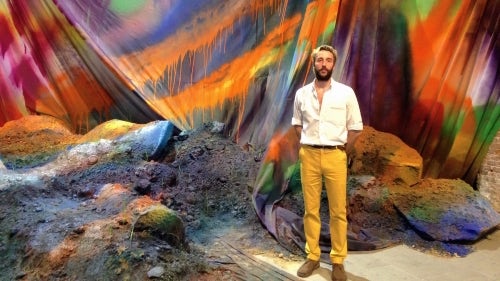 Ashpool’s fashion career began around 2002 after he spent some time studying Cultural Mediation at the Sorbonne. He co-founded the creative agency Vida9 with his mother, Doushka Langhofer, a classically-trained Belgradian choreographer who, according to The New York Times, “realised there was more money to be made staging fashion shows.” Through Vida9, Ashpool and Langhofer began to produce shows for big names like Rick Owens, Gareth Pugh, Christian Dior and Nike.

It laid the groundwork for Ashpool’s next project, a store named Pigalle that opened in October 2008. He funded it with what he says was the first bank loan of his life: 50,000 euros, 30,000 euros of which went towards obtaining the space on 7 Rue Henry Monnier, with the other 20,000 euros going to pay for the shop’s first stock. Langhofer supported him in a managerial role, with additional help from some of Ashpool’s associates from multi-disciplinary creative collective Pain O choKolat.

Thanks in part to his experience at Vida9, Ashpool stocked a variety of past-season designer items from Rick Owens, Sharon Wauchob and Gareth Pugh. He also mixed in Japanese brands like Phenomenon, admitting that sometimes he even paid in cash for samples to sell in the store. Ashpool was part of a three-pronged creative collective — PPP — an acronym derived from Pigalle, Pain O choKolat and Pompon, after the bustling nightlife destination co-founded by Charaf Tajer, another member of the eclectic squad. Their parties and signature style made them memorable figures in the Parisian scene and Ashpool hoped to leverage that popularity into business for the shop, though it took some time. “The first year was a bit difficult,” he admits. “I was working there all the time with some of my people from the crew.”

The label Pigalle — like the store, named after the once-rough Parisian neighbourhood intrinsic to its DNA — began in June 2009. And with each successive season Ashpool introduced a new fabric into the collection, ranging from wool to hand-dyed silk to patchwork suede. After one of his shows, Ashpool met the Harlem rapper A$AP Rocky, who was entranced by the label’s unique energy. Rocky and members of his crew, the A$AP Mob, were often seen sporting Pigalle’s black box logo emblazoned on t-shirts and hoodies, considerably boosting the brand’s visibility at the expense of being summed up as Paris’ answer to Supreme.

“I think we give a special flavour to what we do,” says Ashpool. “The t-shirt was one thing. The t-shirt blew up and some people started to wear it, but many of the other stuff was there even before,” he continues. “I always considered myself as a designer,” asserts Ashpool. “That's what I do every single day and that's where I want to keep going.”

Pigalle’s fashion shows simultaneously exhibit Ashpool’s ambitious vision, creative prowess, and genuine love for the neighbourhood he calls home. Models often include friends, fellow members of PPP and family. In January, Ashpool took over the Palais Garnier and showed Pigalle’s Autumn/Winter 2015 collection to the tune of a song by Oko Ebombo and a few choreographed moves from Ashpool’s godfather, Larry Vickers. The previous season, Pigalle hosted a series of 3-on-3 basketball tournaments in New York City and Paris to fete the release of the label’s second sneaker collaboration with Nike, a monochromatic Air Raid sneaker, originally meant for streetball. The Parisian tournament also celebrated the opening of Pigalle’s sportswear-themed collection and second store: Pigalle Basketball. Ashpool played the sport since he was seven and competed heavily in French leagues until he was 18. The shop’s location at 17 Rue Duperré is significant because it’s directly across from the neighbourhood basketball court that Ashpool and his Pain O choKolat crew renovated in 2009, with assistance from Nike.

For Ashpool, who coaches a youth basketball team for 12- to 14-year-olds and is almost always mobbed by kids whenever he’s in the street, the second store serves as an outlet for the lower-priced wares whose commerciality allows him to pursue his higher-end fashion ambitions with his Rue Henry Monnier shop and main Pigalle line. “It's mainly for the youth and it's a continuation of all the hoodies and stuff,” he says of Pigalle Basketball.

The most important sport in Ashpool’s life plays an even larger influence in his new collection, the designer revealed. A short version of a documentary titled Ensemble, which follows the basketball team he coaches, will be shown when he presents his Spring/Summer 2016 collection in Paris on Friday. Ashpool is also set to release another Nike collaboration on June 27, comprised of jerseys, shorts, t-shirts, caps, sweaters, balls and a remastered and remixed version of the Dunk basketball sneaker. “I took the previous mould and then I really worked on it. It took a long, long time to develop,” says Ashpool, who also hinted at an accompanying apparel collection and a more impactful project with Nike down the line. “That's what I wanted to do since I'm young: work on fashion and work on sports.” 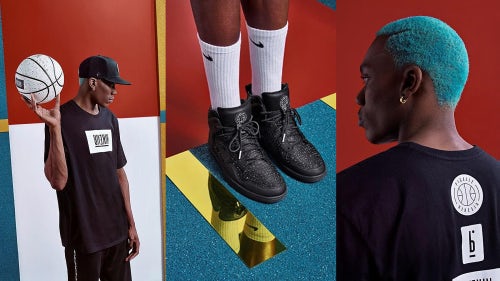 As the son of a choreographer and a sculptor, Ashpool refers to his parents as “proper artists of the ‘60s” who never really saved or were in a position to manage a lot of cashflow. So it’s perhaps surprising that Ashpool has managed to turn his initial 50,000 euros bank loan into an enterprise that generates annual revenue of around one million euros (about $1.1 million), 350,000 euros of which is funnelled back into the business. The resulting profit is a handsome one, which is why it’s interesting that Pigalle is planning a significant shift in strategy.

Pigalle Basketball and Pigalle’s main line are currently carried by about 20 stockists and, while Pigalle Basketball has an online store, Pigalle’s main line isn’t yet sold on the brand’s website. But change is afoot. For one, Ashpool plans to launch e-commerce for his main line (pigalle-paris.com) in September or October. But the move is part of a much wider plan to eliminate wholesale from his strategy and build a more vertically-integrated business.

“I'm going to cut down all the accounts, all the wholesale from this season, it's finished,” says Ashpool, referring to both his main line and Pigalle Basketball. Indeed, after dealing with wholesale for a few seasons, he plans to present his clothes in the way he envisions them — in his own stores. “I want people to discover [Pigalle] in my own environment and I want new customers to buy things at a fair price,” he says. “As soon as you enter the wholesale thing, I think you cannot achieve this.” His first new store will open in Tokyo in August.

Stepping back from wholesale also gives Ashpool the freedom to focus on the quality of his goods, 90 percent of which are made in France (the other 10 percent is manufactured in Japan), he says. Indeed, the designer is making real efforts to control Pigalle’s growth in order to preserve its authenticity and unique energy. In doing so, Ashpool has declined several collaborations and offers to inject a million dollars into the brand. “When you have your own world, then you can spread it out,” he says.

While Ashpool is hoping to wow the ANDAM judges with his Spring/Summer 2016 show, he remains highly cognizant of an entirely different set of critics: his youthful customer base and a younger community of creatives who see him as a role model. Beyond a successful label and the emblem of a neighbourhood, Ashpool sees Pigalle as a movement, with him at the forefront.

“I feel that I can be a leader for a whole new generation,” he says. His main advice for young designers? “Do your own thing; don't try to follow the big brands; don't try to go too fast.”

Editor's Note: This article was revised on 23 July, 2015. An earlier version of this article misstated that Stephane Ashpool’s label Pigalle was nominated for the ANDAM award, with a prize of 370,000 euros. The prize is 250,000 euros.