In June, Chanel reported financial results for the first time in its history. Now, the $10 billion fashion house is evolving its digital strategy and shuffling some of its executives. What does this spell for the future of the brand?

In June, Chanel reported financial results for the first time in its history. Now, the $10 billion fashion house is evolving its digital strategy and shuffling some of its executives. What does this spell for the future of the brand?

This week, the 108-year-old Parisian fashion house, which recently established a London-based holding company for its global operations, is launching e-commerce for eyewear in the UK.

Eyewear is the first non-beauty product Chanel has sold online in the country, which has the second highest e-commerce penetration in the world, behind only China. But the brand still has no plans to sell core categories like ready-to-wear and handbags online, even as worldwide luxury e-commerce sales jumped by 24 percent in 2017 and are expected to continue to grow rapidly, accounting for 25 percent of the total luxury market by 2025, according to Bain.

The UK eyewear initiative coincides with the re-opening of a dedicated eyewear boutique in London’s Burlington Arcade, which will serve as a hub for both online and offline sales. This underscores Chanel’s belief that its physical boutiques are the best way to connect with consumers and will remain at the centre of its budding omnichannel strategy, which got a boost in February from a strategic partnership with heavily funded fashion marketplace Farfetch.

“We believe it’s another way to communicate,” Bruno Pavlovsky, Chanel’s president of fashion, told BoF in an exclusive interview. “What we have to create is a very strong link between the site, the boutique and the customer. It’s what we consider to be the right experience.”

This means every online eyewear shipment will be handled by a Chanel staff member. And while the physical store carries the full range of product — eyewear was first introduced to consumers in 2000 through a licensing deal with Luxottica — the online store will stock a more limited selection, including seasonal items, digital exclusives and best-sellers.

Chanel is also set to introduce a UK-only “reserve-online, pickup in-store” option, the first time the company has instituted such a service. It is perhaps its greatest digital leap forward since it launched its US eyewear e-boutique in 2015. (Chanel has been selling fragrance and beauty products online in the US since 2005.)

For Chanel, no stranger to digital marketing, its latest online push is as much about communications as product sales. “It’s important to continue to fuel novelty,” explained Pavlovsky. “We’re not focused on categories, but on the collection. The measure is not the impact of coats or shoes, but whether the message is impactful.”

Following a global price harmonisation drive announced in 2015, the company also aims to make it easier for customers shopping across regions and platforms to maintain one universal profile. “We have a lot of customers that shop at multiple boutiques in multiple countries, and that’s a key point for our future,” he continued. “There is a lot of work to be done, and it will take a while before being fully ready.”

Its latest online push is as much about communications as product sales.

For Chanel, thinking more globally is not only about being more customer centric, but also creating operational efficiencies never before achieved at the firm, whose regional subsidiaries have long been siloed. The latest efforts are indicative of a greater transformation currently underway at the company, which recently reported financial information for the first time in its history. In 2017, global sales at Chanel grew 11.5 percent to reach $9.6 billion, rivalling Louis Vuitton, the world’s largest luxury fashion brand, which generated almost $12 billion in sales last year, according to estimates by Sanford C. Bernstein.

While the information cemented Chanel’s status as a luxury heavyweight, it also revealed clear differences in the way the private company — owned by the secretive descendants of Pierre Wertheimer, an early business partner of Gabrielle “Coco” Chanel — is run compared to its publicly traded competitors. 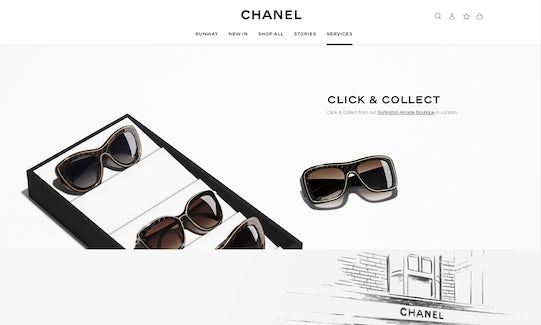 “If you compare it to brands of similar size, like Vuitton and Gucci, it seems that the company is not managed for profitability as the first goal,” said Mario Ortelli, managing director of Ortelli & Co, an advisory firm. Instead, Chanel seems to be focused on what Pavlovsky called emotional value. “We are not working for the margins,” he said.

Chanel’s recent numbers were also revealing in what they did not say. The company chose to break down sales by geography, but not category, although Pavlovsky noted that ready-to-wear is growing more quickly in 2018 than any other segment of the company’s fashion division. In the Americas, sales in 2017 increased by just over 5 percent — compared to 10 percent in Europe and 16.5 percent in Asia Pacific — which he attributed to store renovations.

Some have suggested that Chanel’s new corporate strategy was designed to rebuff a takeover attempt. Chanel chief financial officer Philippe Blondiaux told the New York Times in June: “We are not for sale, and absolutely nothing will change that.” Blondiaux added that the purpose of reporting financial information was, in part, to correct years of speculation that the company was suffering from poor performance.

The release dropped under the watch of Chanel chief executive Alain Wertheimer, who was announced as the company’s interim chief after the dismissal of long-time global chief executive Maureen Chiquet in 2016. He has remained in the position for more than two years and isn’t going anywhere anytime soon, according to recent statements by representatives of the company.

What else, then, will change under Wertheimer's watch?

“I’ve been working on the fashion division for 20 years and the vision has always been the same,” Pavlovsky said. “The changes that we are implementing now started a long time ago. There is no change in the strategy of the house, there is just a change in the communication about the figures.”

The restructuring is likely to further fuel speculation around succession planning.

However, Pavlovsky’s own role is expanding as part of a wider executive shuffle at the company, BoF has learned. In addition to his current duties, the long-time fashion head will soon assume control of the fragrance and beauty division as president of Chanel SAS. Current fragrance and beauty president Christine Dagousset is moving into a strategic role. (Her new title is global long term development officer.) Richard Collasse, current president of Chanel's Japanese subsidiary, is stepping down in December 2018 and into a new position. His new title will be global travel retail head.

These appointments were announced at a recent executive meeting and are well-known throughout the company. A representative for Chanel confirmed the changes, but declined to comment.

The restructuring is likely to further fuel speculation around succession planning on both the executive and creative sides of the business. In June, Blondiaux noted that if "members of the next generation of the Wertheimer family are considered for positions within Chanel in the future, it will be at levels commensurate with their experience and though the usual process of recruitment for managers at Chanel." Arthur Heilbronn, the eldest son of Charles Heilbronn, half-brother to Alain and Gérard Wertheimer, in particular, has spent time over the past year visiting many of Chanel’s subsidiaries, according to one source.

“Our [chief executive] is in great shape and seems to come up with an idea every five minutes,” Blondiaux told the Times. “Who might come next is not on the agenda.”

Octogenarian creative director Karl Lagerfeld, who has stated in the past that he has a lifetime contract with the house, also appears to be staying put for the time being, with most indicators suggesting his long-time studio head, Virginie Viard, will take the reins upon his departure. Pavlovsky has grown tired of the question, saying he had visited with Lagerfeld in the studio the day before his latest couture show. “He’s still here,” the executive deadpanned.