Louis Vuitton generates almost $12 billion in revenue and $5 billion in operating profit for the luxury conglomerate. How much more can it grow?

PARIS, France — Louis Vuitton remains the world’s largest and most profitable luxury brand. According to estimates by Sanford C. Bernstein, the luxury megabrand earned €9.6 billion in revenue (almost $12 billion), with earnings before interest and tax (EBIT) of more than €4 billion in 2017, making up almost half of the operating profit in the entire LVMH empire.

The French luxury conglomerate posted another fiscal year of record revenues and operating income last month. Revenue rose to €42.5 billion, a 13 percent increase year-on-year, while group operating income was 8.3 billion euros, up 18 percent. But while LVMH itself does not breakout results for its individual brands, Bernstein estimated revenues and profits for each of the LVMH’s brands and the results show just how important Louis Vuitton is to the overall LVMH business. 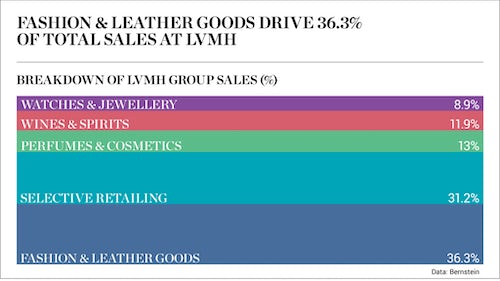 The group's fashion and leather goods division posted revenues of €15.5 billion ($19 billion), up 13 percent year-on-year, making up about 36.3 percent of the overall LVMH business, but accounting for 59.1 percent of the group’s profits, with earnings before interest and taxes (EBIT) of €4.9 billion ($6.1 billion). Meanwhile the selective retailing business, which includes multi-brand beauty giant Sephora, accounts for another third of the business — 31.2 percent of revenues. Watches and jewellery, perfumes and cosmetics, and wines and spirits account for approximately 10 percent each.

Is LVMH's fashion and leather goods division overly reliant on a single megabrand? 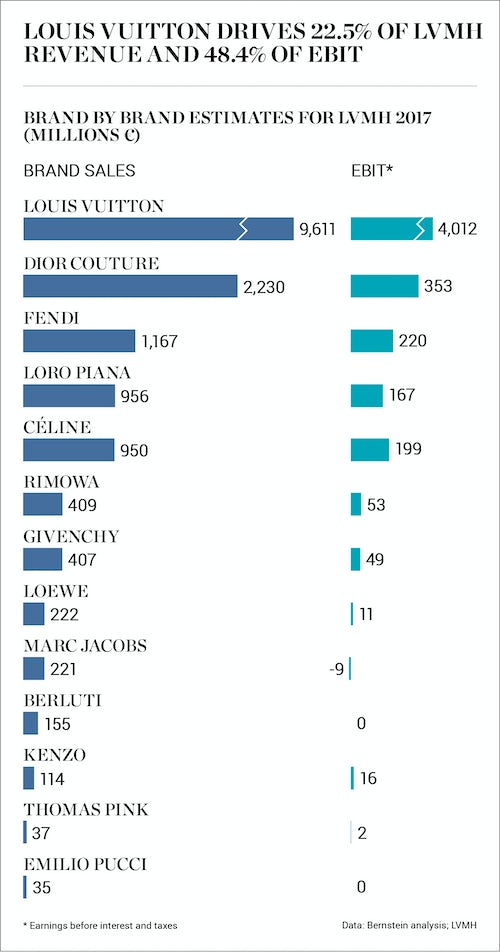 “The problem is when the key brand loses traction, but Vuitton is an incredible asset because it’s the biggest brand by size in luxury overall and also the brand with the highest profitability,” said Mario Ortelli, a senior luxury goods analyst at Sanford C. Bernstein. “That’s why the company is aiming to keep the brand up and running by continuing product innovation and improving its digital strategy.”

But looking ahead, Céline could be the fashion and leather division’s new star. While it accounted for only €950 million in sales — 2.2 percent of the group’s total revenues — in 2017, the recent appointment of Hedi Slimane as artistic, image and creative director signals LVMH chief executive and chairman Bernard Arnault’s commercial ambitions for Céline, especially as the label nears the €1 billion mark. “Slimane in the past has had fantastic results at Dior Homme and Saint Laurent,” said Ortelli of the new hire.

Under Slimane, Céline is set to expand into men’s, couture and fragrance and LVMH has re-evaluated its growth plan for the label, establishing a revenue target of €2 billion to €3 billion within the next five years. This means Céline could surpass Fendi and Christian Dior by 2023. But as the round of designer musical chairs speeds up, “the risk for LVMH is if Mr Slimane loses his commitment to this project over time,” said Ortelli.

It also means the conglomerate will continue with its opportunistic mergers and acquisitions strategy. While Arnault has said he will “probably wait for the next crisis” to make additions to the group’s portfolio, the group is not actively pursuing targets because valuations are sky-high. “But be sure that LVMH will look for acquisitions of any brand with good heritage, good positioning and the relevant size if it comes up for sale,” said Ortelli.

Editor's Note: This article was revised on February 7, 2017. A previous version of this article misstated that Christian Dior Couture revenues in 2017 were €1.17 billion. In fact, 2017 revenues for Christian Dior were €2.23 billion.