PARIS, France — Kim Jones is joining the Roman fur and leather goods maker Fendi as its artistic director for womenswear, while keeping his job as the designer of LVMH stablemate Dior Homme, following in the footsteps of Fendi's late multi-tasking designer Karl Lagerfeld, who designed three brands at once.

At Dior Homme, Jones has reinvigorated sales since 2018 with a mix of luxe tailoring, streetwear and hip artist collaborations. He rose to prominence as a menswear star during a seven-year tenure as menswear director at Louis Vuitton, LVMH's biggest brand, following stints at rival group Richemont's Dunhill label and years running his own menswear brand.

But women's ready-to-wear, fur and haute couture will be new territory for the designer. So, what is it about Kim Jones that’s won over LVMH's trust enough for the group to hand him the keys to yet another house, an Italian brand where tradition and culture run deep?

The designer isn't easy to categorise. You might say he was "street," with his deep appreciation for Japanese streetwear and track record in launching blockbuster collaborations between Louis Vuitton and Supreme, and Dior and Nike. But then you'll see him send out softly tailored suits in pink and lilac, tied with regal sashes, reinterpreting Dior's founding fairytale aesthetic for men. Items as casual and traditionally masculine as cargo pants and combat boots brush up against pearl necklaces and opera gloves.

But if his look is full of contrasts, it's also adaptable: at Louis Vuitton, Jones took the monogrammed luggage-maker's travel heritage to heart, organising his creative process around trips to Tokyo, New Orleans or the Chilean desert, building a global catalogue of inspirations for the most global of luxury brands. And while leaving luxury's biggest brand might have appeared as a downgrade to many a designer, Jones embraced Dior's extensive archive and ateliers to tell a new story, with references that are as historical as they are global, and with an added dimension of technical research that often pushes menswear in the direction of couture. 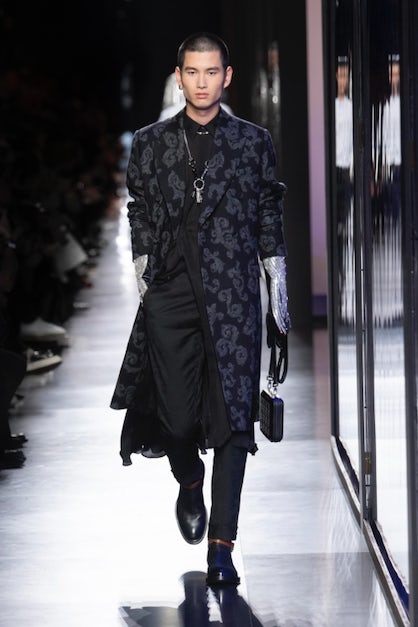 Jones “has continuously proven his ability to adapt to the codes and heritage of the LVMH houses while revisiting them with great modernity and audacity,” said Bernard Arnault, LVMH's chairman and CEO, in a statement.

"Kim brings a fresh approach, he's a young spirit — but he's also an old soul," said Julie Gilhart, a fashion consultant and chief development officer at showroom-turned-accelerator Tomorrow. "It's a good match for Fendi, which is such a heritage brand."

Jones will work alongside Silvia Venturini Fendi, the granddaughter of Fendi’s founders, who will return to focusing on accessories and menswear collections after taking on the overall creative directorship of the house in the wake of Lagerfeld's death last year. Serge Brunschwig, previously managing director at Dior Homme, has been Fendi’s CEO since 2018.

In addition to honing his voice as the womenswear designer of a major brand for the first time, Jones will be charged with injecting a fresh fashion perspective at a house where Karl Lagerfeld's aesthetic codes reigned supreme for 54 years.

While Kim Jones is entering uncharted territory by designing for two top LVMH houses at the same time, Lagerfeld was known as the ultimate fashion multitasker. He designed a dozen or more collections each year between Fendi, Chanel and his namesake brand.

During his long tenure at Fendi, Lagerfeld dusted off what had been a stodgy fur coat maker for the Italian bourgeoisie and turned it into a global fashion brand. He re-engineered the brands coats to be much lighter, more supple, and more colourful. Sales took off in 1997 with the introduction of Venturini Fendi's Baguette purse, which ushered in the "it bag" era.

Fendi surpassed €1 billion in annual revenues under former CEO Pietro Beccari, who left the brand for Dior in 2018. Beccari ramped up digital communications, moved the brand upmarket by phasing out monogrammed canvas lines, and emphasised Fendi's Roman heritage with marketing spectacles such as a building a catwalk across the Trevi Fountain.

Working alongside Lagerfeld and Venturini Fendi, Beccari also increased the brand's focus on fur, expanding its use across product categories with colourful bag charms, linings and collars. The move added a luxurious touch to merchandising and reconnected bags and ready-to-wear to the brand's roots, but has also increased the risk of alienating shoppers who are increasingly concerned with animal-rights.

After launching a couture unit with “haute fourrure” or high fur shows starting in 2015, Fendi has since repositioned the outings as more traditional haute couture shows, pulling back the events' emphasis on animal pelts.

Navigating the "fur question" will be a key challenge for Jones as he defines a post-Lagerfeld womenswear look at Fendi. Fur is Fendi's founding product, and thus the primary source of its heritage and legitimacy as a luxury house. But it's also a category in crisis: even if it's still sported by some pop culture icons and influencers, and remains popular with clients in key markets like China, cities like Los Angeles and Sao Paolo have instated fur bans.

California, the most populous US state, banned the sale of fur last year, and top luxury brands including Prada and Gucci have said they'd stop using it in their collections.

"I'm sure Kim would have already been thinking about this before accepting the job," Gilhart said. "Fendi is a lot of things beside fur. It's a billion-dollar business."