LONDON, United Kingdom — When Phoebe Philo departed Céline, she left a gaping hole in the market for unfussy, feminine and quietly powerful clothes. Emerging designer Peter Do, who learned his craft from Philo herself, might just do the trick.

In his first season, the designer has attracted a slew of international stockists, from Net-a-Porter to Machine A, which bought into Do’s “real clothes for real women,” as the designer describes. “It’s about building a modern uniform and wardrobe for women.”

Do’s inaugural Spring/Summer 2019 collection, which draws its influence from menswear, as well as a focus on craftsmanship, features new takes on traditional tailoring items, asymmetric dresses and skirts, and pieces made from the designer’s “spacer” fabric, a spongy neoprene material he developed himself.

His pieces — inspired by Irving Penn’s “Small Trades” photographs of ordinary people in the 1950s, as well as Tokyo street style in the 90s and jewellery pieces that are found and repurposed — are simultaneously wardrobe staples and collectibles, with a luxury price point: $2,373 for a satin-crepe and neoprene midi dress and $1,015 for a one-shoulder draped crepe and twill top. 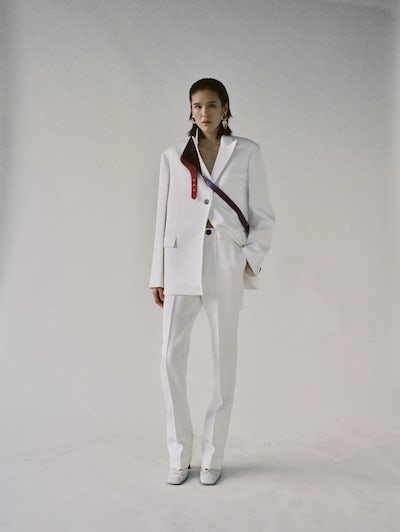 For its first season, the label’s revenue was over $500,000, and it has already doubled market appointments for Autumn/Winter 2019. The label now has a team of 11 people across design, production and sales, all based in New York.

The Vietnamese designer moved to the US when he was 14 years old and it was at high school that he decided to pursue fashion design. After enrolling in Pratt, he transferred to FIT, and in 2014 won the LVMH prize for young fashion designers. The reward was a job at one of the LVMH houses — he picked Céline.

“I worked in Phoebe’s runway team… there I learned about the creative element [of fashion] and honed my craft,” says Do. Two years later, he moved to New York to work under Derek Lam, where he experienced the business side of the industry through doing casting and market reports.

To begin with, Do only had one market appointment, but it was word of mouth and social media that popularised his label and soon, Machine A and eight other stockists, including Dover Street Market in Ginza, Rare Market in Seoul and Gentlewench in London, came knocking.

Net-a-Porter’s global buying director Elizabeth von der Goltz discovered Peter Do when Maggie Maurer, who modelled the brand’s Spring/Summer 2019 lookbook, re-posted some imagery on her account. “Having someone with that designer aesthetic, atelier experience and appreciation for the fabric and quality… that’s what makes him stand out,” says Von der Goltz, noting that the brand has been “one of our best sell-throughs for a new upload,” with 60 percent of the buy yet to be uploaded on the site.

It’s about building a modern uniform and wardrobe for women.

“Since his first season, he’s already crafted signature pieces… that’s something rare to find in a young designer,” says Stavros Karelis, founder and buying director at Machine A, one of the brand’s first stockists. While filling the old-Céline gap certainly influenced the buy, “Peter is trying to make his own aesthetic based on that experience [at Céline].”

Looking ahead, Do hopes to follow in the footsteps of labels like Proenza Schouler and Alexander Wang, which have built entire worlds that include accessories as well as a key retail presence and their own boutiques. But the designer is watching his pace and, for now, is unlikely to join the fashion week calendar. “I think everything is moving so fast. The idea of buying more, reading more, browsing more…” he says. “Everything we do is very considered. Good takes time.”