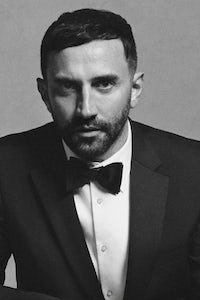 LONDON, United Kingdom — Burberry is aiming to polish its image and position itself as a genuine luxury player alongside the likes of Louis Vuitton and Gucci, while also appealing to a millennial audience that’s thirsty for streetwear-inflected product and a stream of constant newness.

As part of the plan devised by chief executive Marco Gobbetti, the British megabrand best known for its trench coats is embracing frequent product “drops” and bringing new focus to its leather goods business, which currently lags far behind its luxury peers.

But the linchpin of Gobbetti’s strategy is designer Riccardo Tisci, who helped pioneer the integration of high luxury and streetwear at Givenchy and is set to make his debut for Burberry this Monday evening at a former South London postal centre in one of the most highly anticipated shows of the season.

Tisci, 44, who has the title of chief creative officer, has left a trail of teasers on social media, including a new simplified logo and a honey, white and orange-coloured “TB” monogram that was inspired by the brand’s archives (the company’s founder was Mr Thomas Burberry), but also has a cartoonish streetwear vibe and has been promoted on buildings, public transportation and giant, made-for-Instagram plastic teddy bears.

An Instagram selfie he posted last week depicted a bearded Tisci wearing a simple black T-shirt with an oversized “TB” logo. Rihanna recently wore a similar black sweatshirt over tracksuit bottoms at New York’s JFK airport. And two limited-edition crew-neck T-shirts featuring the new logo ($390) were subsequently put on sale for 24 hours only. They promptly sold out, according to the company.

Riccardo has to double jump: a jump into newness and into uplifting the brand into a true luxury player.

But how to square this with Gobbetti’s strategy to freshen but also heighten the brand? Sources close to Burberry say the streetwear-inflected looks teased on Instagram are only a hint of what’s to come and that Tisci’s show on Monday evening will feature more high-end luxury fashion. At Givenchy, Tisci became known for mixing streetwear with luxurious, feminine items in a potent and highly desirable combination. Take the Fall 2013 show’s opening look: a Disney Bambi-print neoprene black sweatshirt, belted and worn with a delicate sheer skirt. (The Bambi top appeared in countless magazine spreads and was a best-seller).

But the designer certainly has his work cut out for him.

"It’s not easy at all to move the positioning of a brand as big as Burberry. Riccardo has to double jump: a jump into newness and into uplifting the brand into a true luxury player,” says Mario Ortelli, managing partner at luxury advisory firm Ortelli & Co. “It is not just enough to do something totally different than before to create interest among the consumers. He has also to improve the perception of Burberry to justify the aimed higher brand positioning and price point.”

It’s likely that the Tisci’s bubbly new “TB” monogram will pop up on Burberry leather goods, which currently account for less than 40 percent of sales, far behind rivals like Gucci, where the category drives more than half of total revenue. While Burberry has had limited success with its $2000 trench-inspired Belt Bag, Gobbetti is betting on a wider offering and sees the biggest opportunity in the $1,000 to $2,000 price range. Still, analysts say Burberry will be fighting an uphill battle. 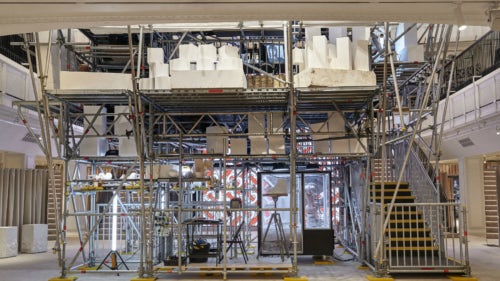 Further clues to Tisci’s vision can be found in the transformation of Burberry’s London flagship store on Regent Street, which was unveiled on Saturday and underscores the brand’s focus on cleaning up its distribution channels, with a greater emphasis on direct-to-consumer retail, as part of its move upmarket.

Overall, the newly refurbished store — whose atrium is dominated by an art installation by British artist Graham Hudson made of scaffolding, body parts and digital cameras — has significantly less product on offer, giving the space a more luxurious feel. Each room has a separate focus: one, for instance, features two limited edition Belt Bags with mixed metal details designed by Tisci in racing red and black. More Tisci-designed product already in the store include black logo hoodies and velvet lined slides, and red patent-leather derby shoes for men and kitten heels for women.

And there are plenty of playful streetwear elements. Small plaid-covered teddy bears cover the roof of another room. They are being sold as clip-on accessories and also appear as a shearling chain-link bear bag (£850). Burberry’s signature check — once associated with "chavs," a derogatory term for a subset of Britain’s working class — is also here in force, offered on overcoats, jackets, shirts, bum bags and more. 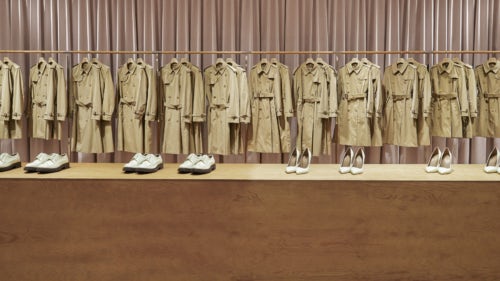 One thing that definitely isn’t changing at Burberry is its digital focus. The brand is selling the first drop of Tisci’s catwalk collection via Instagram and WeChat, and the designer himself is set to continue playing a louder, more pivotal role on social media, not only via the company’s official accounts but on his personal Instagram, where he has 2.3 million followers, as has become more of the industry norm.

Is it enough to reboot Burberry for what Tisci has dubbed a #newera? We’ll certainly know more after Monday night’s show, but Luca Solca, head of luxury goods at BNP Exane Paribas, says the British brand needs a wholesale makeover as radical as Alessandro Michele’s transformation of Gucci if it is going to catch up with rivals.

“In order for Burberry to become relevant again, it needs reinvention and what is expected from Riccardo is the definition of the New Burberry World,” explains Solca. “A great product here or there is unlikely to move the needle, as we have seen recently with Belt Bag. I don’t care too much if he gets good reviews after the show — he will, we know that already — but that he manages to create a far reaching and consistent sense of what Burberry needs to become.”

Indeed, this is ultimately what is at stake on Monday evening.