NEW YORK, United States — One year after Coach Inc. rebranded itself as Tapestry, the sum of the budding American conglomerate is proving to be more than its parts.

The combined company, which also includes Stuart Weitzman and Kate Spade New York, has cut costs, made a push to grow sales in Asia and backed away from frequent discounting that threatened the three brands' accessible-luxury status. Coach creative director Stuart Vevers continues his effort to modernise its look and diversify into new product categories, while Kate Spade New York’s first collection under new creative director Nicola Glass is expected to hit stores in January.

Those various moves appear to be paying off. On Tuesday, the company beat Wall Street forecasts with $1.4 billion in revenue in the first quarter of its fiscal year, up 7 percent from a year earlier. Gross margins — a measure of profitability — rose to 68 percent, from 59 percent a year ago. Tapestry raised its profit outlook for fiscal 2019 to $2.75-$2.80 per share, up from $2.70-$2.80.

In an interview, Tapestry chief executive Victor Luis brushed off concerns around China, was bullish on the after effects of the Kate Spade New York acquisition and once again confirmed that he is openly on the hunt for more brands to bring into the fold. “Our long-term priorities for acquisitions remain unchanged,” he added. “We will be strategic, looking for great brands with opportunities for expansion in the fashion and lifestyle space — both in the US and abroad.”

With more than a billion dollars in cash on the balance sheet, Tapestry could very well make yet another acquisition this year. (It was said to be in the running for Versace, which was acquired in September by the newly minted Capri Holdings, which also owns Michael Kors and Jimmy Choo.)

Its current businesses delivered mixed results. Kate Spade New York, which the company acquired in 2017, was up 21 percent on a reported basis, with comparable store sales down 5 percent, in part due to a pull-back on discounting. (E-commerce sales, on the other hand, accelerated.) 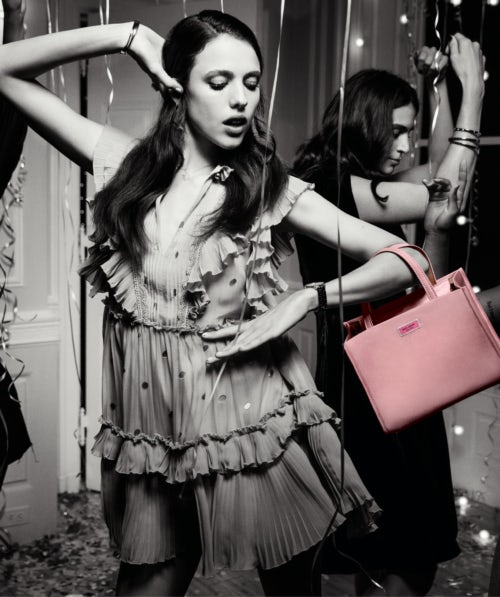 While Glass' first full collection will not hit stores until late January 2019, new handbag styles are already rolling out. “We’re very excited about the feedback we’ve received from the editorial community, from our wholesale partners and from our internal teams that are buying it for our stores,” Luis said. “We look to bring newness, excitement and I would say, a very differentiated platform, to that brand.”

Coach, which still makes up about 70 percent of the company’s sales, has spent the last three years reorganising itself for fashion’s new world order, nixing its brand-damaging flash sales and hiring creative director Vevers to modernise the house in the eyes of the consumer. This quarter, both net and comparable sales increased by 4 percent globally, driven by growth in both North America and China, according to Coach chief executive Joshua Schulman. Coach’s missive is to continue to diversify its offering by category, driving further into outwear, footwear and men’s, where it recently contracted its first global ambassador, the actor Michael B. Jordan.

Shoe label Stuart Weitzman, which has experienced several changes in the past year on the staffing side, including the unceremonious resignation of Giovanni Morelli in the wake of sexual harassment accusations, saw sales dip 1 percent to $95 million. Supply chain hiccups also slowed the brand, although the company is now projecting a return to growth in the next quarter.

“For now, we’re very focused on bringing stability to the business,” Luis said, calling the partnership between Castillo and Poletto "a very productive one."

While each brand is in a different stage of development, the uniting factor is an intention to double-down on China, which currently accounts for under 20 percent of the company’s overall sales. Coach, which has the greatest penetration in the region, has 32 percent “unaided awareness” with Chinese consumers, while Kate Spade New York and Stuart Weitzman have just 2-3 percent. That’s why the company continues to invest both in new stores and marketing. On December 8, Coach will stage a dual-gender pre-fall runway show in Shanghai — the first time it has done so outside of the US.

Rising anti-American sentiment in China may be a concern for some, but both executives appeared unworried, thanks in part to the control the company has over communication with its consumer there. “We’ve seen nothing that points to that,” Luis said. “It’s important that we continue to build individual, one-on-one relationships with consumers across these markets.” Coach, for instance, has directly owned its China stores for 10 years and has been in the market for 15. The company also leverages a WeChat app called WebClient, which allows it to market directly to individual consumers.

As for the 10 percent additional duties on handbags and other goods imported from China, implemented at the end of September by the Trump administration?

Because only 3-to-4 percent of Tapestry’s handbags and small leather goods are made in China, Tapestry has managed to adjust accordingly without shifting prices. And while tariffs are set to increase to 25 percent on January 1 of next year, Luis said that, for the moment, there are no plans to change pricing for products that hit the sales floor in the spring of 2019. (The company also continues to counter-source across Asia in other categories in case more items are added to the tariffs list.)

“Overall, this is a strong set of numbers from a house of brands that is executing well,” Neil Saunders, an analyst at GlobalData Retail, said in a note. “This may well give Tapestry the confidence to make further acquisitions over the next calendar year.”

Independent brands that align with Tapestry’s model include Tory Burch and Burberry. (A reported Coach-Burberry merger in 2016 never materialised.) The question is what is worth buying.