This week, LVMH confirmed the launch of 24 Sèvres, its long-awaited return to multi-brand e-commerce. But the once-distinct worlds of online and offline retail are converging, giving birth to a new retail reality.

This week, LVMH confirmed the launch of 24 Sèvres, its long-awaited return to multi-brand e-commerce. But the once-distinct worlds of online and offline retail are converging, giving birth to a new retail reality.

It’s been 17 years since Natalie Massenet’s Net-a-Porter, Federico Marchetti’s Yoox and LVMH’s eLuxury kicked off the first wave of fashion e-commerce. San Francisco-based eLuxury closed in 2009, a few years after Louis Vuitton decided to launch its own e-commerce site, leaving the business without its anchor brand and isolating it from LVMH’s Paris headquarters. But Massenet and Marchetti’s ventures were successful and ultimately merged to form the world’s largest luxury e-tailer with 2016 sales of €1.87 billion, fundamentally disrupting fashion retail along the way.

Change took time. For the first few years, most high-end fashion brands dismissed the idea of selling luxury goods online. But over time, many top luxury brands began working with Net-a-Porter and Yoox, and investing in their own digital sales channels. By 2014, nearly all luxury market growth was coming from e-commerce, with online sales reaching €14 billion, up 50 percent from 2013, according to McKinsey & Company, which noted a “tipping point” in luxury e-commerce. In the next ten years, the firm expects the share of luxury sales occurring online to triple, making e-commerce the world’s third largest luxury market after China and the US.

This week, eight years after the demise of eLuxury, LVMH jumped back into the ring with 24 Sèvres, its long-awaited return to multi-brand e-commerce. In recent years, the space has become crowded and highly competitive, but Ian Rogers, the group’s chief digital officer, says the venture is well-timed and will set itself apart with a distinctly Parisian point of view, product from LVMH brands like Louis Vuitton and Dior that others don’t sell, a more visual approach to merchandising and high-touch services like styling sessions via video chat.

But now a new wave of change is washing across luxury retail. While e-commerce is growing fast, the portion of personal luxury goods purchases that happen online — now about 7 percent of the total — is expected to plateau at about 20 to 25 percent by 2025. This means that, for the foreseeable future, the vast majority of sales will still take place in physical stores. And yet, about three quarters of all luxury goods purchases, even if they take place in stores, are influenced by what consumers do online, according to McKinsey. “My assumption in the long term is that 99 percent of purchases will be influenced by digital in one way or other,” Nathalie Remy, who leads the firm’s fashion and luxury goods practice for EMEA, told BoF last year.

To be sure, the customer journey is more complex and non-linear than ever before, blending online and offline touchpoints. Today, the path to purchase could easily start online and end in a store, or vice versa, moving easily between physical and digital interactions along the way. Make no mistake, retail and e-tail are converging, and there’s little point in thinking of them as separate entities any more. It’s all just shopping.

In response, legacy players with large store networks like LVMH are accelerating online, while digital players like Farfetch and Moda Operandi are deepening their presence in the physical world. Just this week, MatchesFashion.com, which began with physical stores before e-commerce became the engine of its growth, announced plans to open a new “townhouse” in London’s Mayfair which will play host to events and private clients as well as two floors of physical retail.

Some are learning to connect the dots, integrating their online and offline businesses to seamlessly serve customers who move fluidly between physical and digital touchpoints. Farfetch, in particular, has a developed a robust ‘new retail’ strategy, leveraging the virtual store network of its brand and boutique partners.

But this new world of convergence comes with challenges as well as opportunities. For a start, there’s the challenge of building a universal view of inventory across multiple channels, and making sure the right product gets to the right place at the right time. Then, there’s the task of keeping track of consumers — and their data trails — as they move from online to offline and back again. This isn’t easy and will require the kind of innovation that Farfetch, for one, hopes to spark with its Store of the Future platform, which aims to dramatically improve retail productivity, in part, by tracking in-store interactions and developing a more holistic view of customers by meshing together online and offline data.

There’s also the challenge of reimagining the physical store. As e-commerce grows, the store of tomorrow will have to deliver experiences you can’t get online, becoming much more than a selling space. To facilitate omnichannel services like “click and collect” and 90-minute delivery, stores will surely function as distribution hubs for online orders. But now that nobody needs to visit a physical store on a Saturday afternoon, retailers will also have to compete for precious leisure time with activities like seeing a movie, going to a concert, attending a sports match or visiting a museum. That means staging the kind of experiences you can’t get online and, ultimately, transforming stores into places where people go to spend time and connect with others — not just to shop.

Finally, the stores of tomorrow — much like MatchesFashion.com’s ever-changing new townhouse in London — will also have to display the kind of flexibility that allows them to evolve at a rapid rate, because, in today’s new retail reality, a large percentage of shopping may still be happening offline, but there’s little doubt that consumer expectations are being formed at the pace of digital.

LVMH to launch multi-brand e-commerce site. On Wednesday, the French luxury goods group confirmed the coming of its new fashion e-commerce venture 24 Sèvres. The site, linked to LVMH's Parisian department store Le Bon Marché, will launch in June with a womenswear offering from the group’s own portfolio as well as other brands. The move marks LVMH's return to the crowded and highly competitive multi-brand fashion e-commerce space, eight years after the demise of eLuxury.

Coach to buy Kate Spade for $2.4 billion. Coach Inc. confirmed on Monday that it would buy accessories brand Kate Spade, ending months of speculation. The acquisition is part of the company’s plan to build “the first New York-based house of modern luxury lifestyle brands.” Once the deal closes in the third quarter of 2017, Kate Spade will join Stuart Weitzman — which Coach Inc. acquired for nearly $600 million in 2016 — in the company’s stable of mid-market brands.

Hudson's Bay Co. hires debt advisor to review Neiman Marcus bid. The Canadian owner of Saks Fifth Avenue and Lord & Taylor is reported to have hired a debt restructuring advisor to review its options for making an offer to buy struggling department store Neiman Marcus. The news is the clearest indication that Hudson’s Bay Co. is considering an acquisition, though Neiman Marcus's $4.7 billion debt may pose a significant challenge to the deal.

Time Inc. to sell some magazine titles. The publisher has announced that it plans to sell some of its "non-core" and "smaller" magazine titles. Last month, Time Inc. ended months of talks with potential acquirers including Meredith Corp and a group that included private equity firm Pamplona Capital Management and Jahm Najafi, the CEO of private investment firm Najafi Cos.

Abercrombie enters talks with potential buyers. The teen clothing retailer said on Wednesday that it was in talks with several interested parties, after a report stated that it was working with an investment bank to oversee a number of takeover bids. Abercrombie's shares are trading at a 17-year low, making it a vulnerable acquisition target. The company, which cut 150 corporate jobs in January, has struggled with sluggish footfall and increased competition from fast fashion brands. 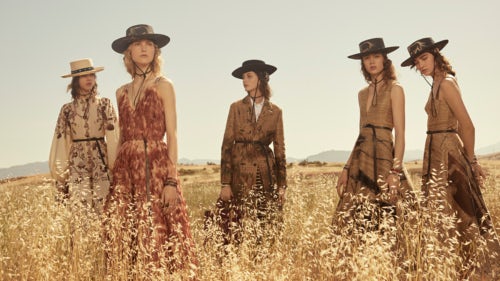 Dior stages Cruise show in Los Angeles. The French fashion house showed Maria Grazia Chiuri's first Cruise collection in a lavish spectacle in the Santa Monica mountains, complete with Dior-branded hot-air balloons. Chiuri is the third person to hold the position of artistic director of the house’s women’s collections in five years. But the rapid turnover seems to have done little to bruise the power of the brand.

Roberto Cavalli names new creative director. The Italian fashion house has appointed Paul Surridge as its new creative director. Surridge succeeds Peter Dundas, who left the company in October after 19 months in the role and follows a radical reorganisation by CEO Gian Giacomo Ferraris. Surridge, who will have creative responsibility for all the group's brands, was most recently a creative consultant to Acne Studios, and previously held the role of creative director at Z Zegna from 2011 to 2014.

Adidas appoints global operations chief. The German sportswear company said on Wednesday that it had promoted its Western Europe head Gil Steyaert to global operations chief and elevated its human resources head Karen Parkin to the executive board, part of a wider management shake-up put in place by CEO Kasper Rorsted. Rorsted, who assumed his role in October, is focusing his efforts on reviving Adidas’s core brands. This week, the company also sold its underperforming golf businesses.

Matthew Moneypenny exits Great Bowery. The chief executive of the super-agency is leaving the company, effective immediately. Moneypenny's departure is thought to be rooted in disagreements with investor Waddell & Reed and comes just weeks after Alex Carloss, head of originals at Youtube, left the board, while two more board seats are set to expire imminently. Moneypenny, who remains an investor in the firm, founded Great Bowery in 2014 in an effort to bring the same synergies to fashion that Hollywood agencies offer the entertainment industry. Moneypenny has been replaced by Richard Companik, who has been promoted from his role as chief operating officer and chief financial officer.

Snap Inc. reports first earnings since IPO. In its debut earnings report since its initial public offering in March, Snap Inc. said its Snapchat app had added fewer users than projected in the first quarter, sending its shares 21 percent lower. Revenues also fell short of analysts' expectations at $149.6 million. The results added to signs that the company is facing increased competition from social media giant Facebook, though its CEO Evan Spiegel dismissed concerns, explaining that people may not yet understand the value of his platform.

Miroslava Duma launches new tech venture. The founder of Buro 24/7 is launching a new company called Fashion Tech Lab (FTL), a hybrid of an investment fund, accelerator and experimental laboratory that aims to commercialise new technologies and sustainable innovation for the fashion industry, with $50 million to invest. FTL forms part of Duma’s rapidly expanding empire which includes Russia-based fashion and lifestyle digital platform Buro 24/7 and The Tot, adding yet another layer to her many business interests that span across fashion, media and technology.

Matchesfashion.com is to develop a new central London townhouse space. The luxury fashion retailer plans to expand its brick-and-mortar presence after signing a lease for 5 Carlos Place in London’s Mayfair. The company's executive chairman Tom Chapman told BoF that the six-level property would be a permanent home for the company’s “In Residence” event series, as well as three floors of private shopping suites and two floors dedicated to a new concept retail space.