Adam Lippes tells BoF how he bought back his name and relaunched his label.

NEW YORK, United States — It’s rare to find Adam Lippes wearing anything other than a perfectly fitting t-shirt of his own design. He tends to go for the crewneck, short-sleeved version, made of 100 percent supima cotton with hand-finished seams.

This t-shirt is the piece with which Lippes launched his contemporary basics line ADAM + EVE in 2004. It’s also the piece with which, in 2012, starting afresh, he launched again with a namesake collection, Adam Lippes, an American sportswear label set to generate nearly $5 million in sales revenue this year. His new company has built a global wholesale network of 75 stockists, doing 45 percent of its sales outside the US, and is profitable — no small feat for a brand that is officially only 18 months old.

But to reach this point, Lippes had to first make the kind of mistakes most designers don’t survive.

Lippes, 41, was raised in Buffalo, New York, by a family of professionals: bankers, lawyers, business owners. “I wanted to be a fashion designer, but it really was not on the cards,” he explained over a plate of eggs just blocks away from the rented townhouse he has converted into a workspace. Instead of attending design school, Lippes earned a psychology degree at Cornell University. “I studied in Paris for a year, and it was there that I was exposed to fashion,” he said. “Not in an educational way, but going out and meeting models and fashion designers and visiting studios.” 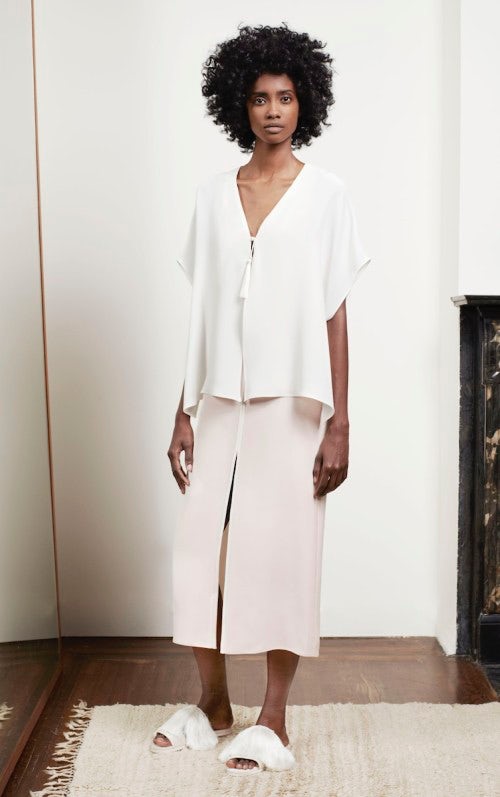 After graduating from Cornell in 1995, Lippes landed a job working for Electra Toub, then the manager of two of Polo Ralph Lauren’s flagship stores, one on the Upper East Side and another in East Hampton. When Toub took a position in licensing at Oscar de la Renta ten months later, she brought Lippes with her. With the boldness of a naive entry-level employee, Lippes struck up conversation with de la Renta. “When I first got there, a cook would make lunch every day. Once, Mr. de la Renta walked in, took his plate and sat down. I thought, ‘Well, I guess I should go.’ I took my plate, and sat down next to him. I didn’t know what else to do. He ate for a minute and asked, ‘Who are you?’ From that moment on, I was learning fashion from the master.”

During his tenure at the company, Lippes moved up the ranks from assistant to worldwide creative director. His personal uniform — a t-shirt and jeans — was a radical departure from the suits that most of his colleagues, including de la Renta, wore to work. By 2003, he was toying around with an idea for his own basics line. He created the collection — originally called ADAM + EVE — while still employed by de la Renta, who was also his first investor.

In 2004, Lippes launched with a swarm of retailers eager to sell his label. It was a good time to be a young designer. The contemporary category was still in its early stages and retailers were hungry for mid-priced product with a fashion edge. (3.1 Phillip Lim, Alexander Wang and Rag & Bone women’s didn’t launch until 2005.) Lippes’ basics line was picked up immediately by Saks Fifth Avenue and soon grew into a complete collection. In 2006, he was on Oprah. In 2007, he began staging runway shows.

That same year, Atelier Fund, an investment fund backed by Richemont, acquired 49 percent of the company for $9 million. The business grew quickly and, by 2009, the brand, which had, at that point, been renamed ADAM, was in 300 doors and reportedly generating annual sales of about $20 million. In 2010, Lippes’ label was fully acquired for an undisclosed sum by Kellwood, a Chesterfield, Missouri-based company that owns and operates several brands and licensees – including Rebecca Taylor and, at one point, Vince. (Kellwood has been owned by private-equity firm Sun Capital Partners since 2008.) Lippes saw a working partner in then Kellwood CEO Michael Kramer. However, Kramer left less than a year later to run operations at J.C. Penney and Lippes lost a critical ally. He subsequently decided to exit the company which now owned his name. “I quit literally two days after Michael left,” he said. “I was only an employee and it was a tough relationship. It was not what I wanted for a brand. It was not what I wanted to give to fashion.”

Ultimately, Lippes said he was just not comfortable with the direction in which Kellwood wanted to take the company (including shilling goods on the Home Shopping Network). But leaving was still hard. “We had 60 employees,” he said. “It was my baby. It was my name.”

After Lippes’ departure, Kellwood ceased production of the ADAM collection. What they did keep, though, was the designer’s trademark. 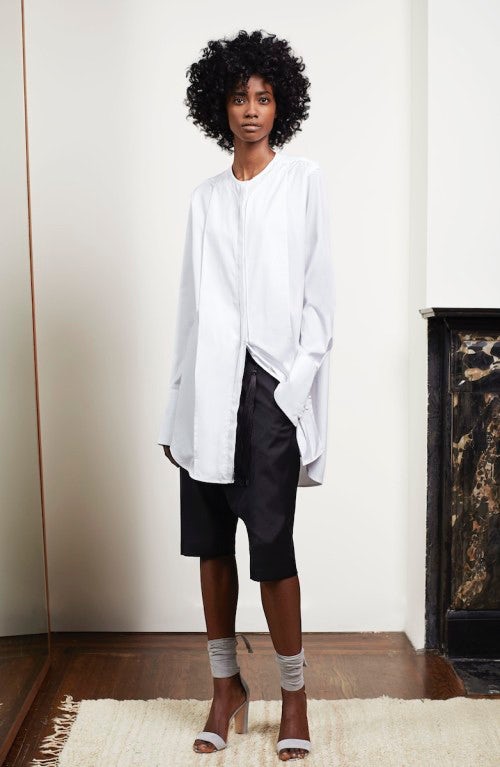 However, it was never Lippes’ intention to stop designing. And just months after leaving Kellwood, he and his brother, along with a few ‘friends and family’ investors, hatched a plan to hit the reset button and launch a new line designed by Lippes. The first challenge was buying back Lippes’ trademark from Kellwood, which took months of negotiation. Although the designer won’t disclose how much he paid for it, he will say that “it wasn’t free” and that he has poured much of his personal savings into the new venture.

“I had made money along the way and I had sold my apartment in the meantime,” he said, referring to his much-admired Greenwich Village penthouse, where he often hosted events. Lippes also spent time looking for a business partner who could manage the company’s balance sheet. Enter Donata Minelli Yirmiyahu, who advised the company in a consulting role before joining full-time in May 2014 as the label’s CEO and part owner. (Before that, she was CEO of Yigal Azrouel and co-founder of Azrouel’s contemporary brand Cut25. She also helped launch brands for Marzotto SpA, Ittierre SpA and Aeffe USA.)

The second time around, Lippes was more confident than ever in his aesthetic, adding in core wardrobe pieces to the mix: t-shirts, yes, but also blazers, jumpsuits, and outerwear. He also repositioned the brand, moving it from contemporary to designer. “When I look back, I’m not sure why I did contemporary the first time,” he said. “I had never done it before. But it was what people wanted then.” He wasn’t convinced he’d be able to make a smooth transition upward. “It was nerve-wracking, because a lot of people say that you can’t go from contemporary to designer.” But Yirmiyahu, for one, believed it would work. “The clothing speaks for itself,” she said. “At some point, you have to put history behind you and just look at what is in front of you.”

A side-slit cashmere coat by Adam Lippes, today, sells for $2,680; a crepe tie-front blouse for $830. “No one blinked [at the new price point],” according to Lippes. Net-a-Porter, Saks Fifth Avenue and Neiman Marcus all bought the first collection, which launched for Autumn 2013. “We knew almost instantly that his brand would perform very well,” said Net-a-Porter buying manager Sasha Sarokin. “His attention to detail, superb use of fabrics and precision tailoring are all qualities that our customer craves.”

Bergdorf Goodman senior vice president Linda Fargo is equally enthusiastic. “It's been interesting watching Adam's creative evolution over the years. His work for his namesake collection now, perhaps, is the most synergistic with his personal and private aesthetic,” she said. “When that design parallel happens, I often find that's when a designer’s work is at its most clear and resonant. The price structure is also in the perfect zone of accessible quality.” 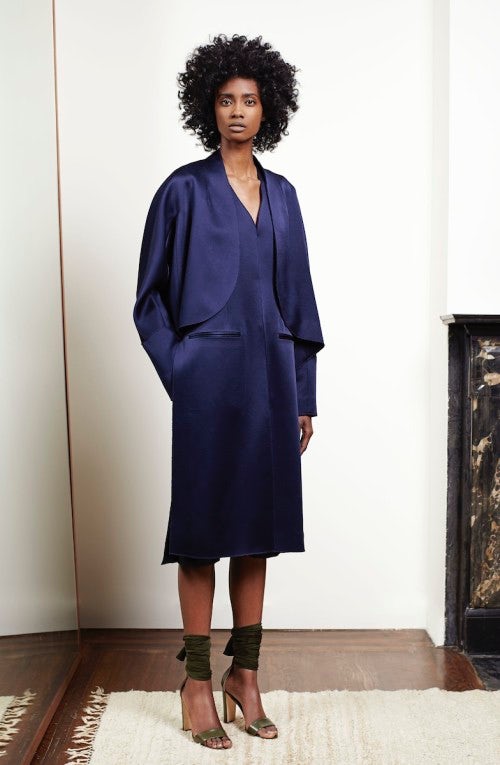 Today, the brand is focused on increasing the importance of its direct-to-consumer e-commerce channel. Right now, it’s a little more than 5 percent of the overall business – Yirmiyahu would like it to be 30. “We’re making big strides for it to be more shoppable,” she said. “I think now is the most exciting time to be a designer because there are so many opportunities to reach your customer. We just started to ship direct-to-consumer internationally. It’s important to have wholesale, but they’re all equally important.” Lippes and Yirmiyahu are keen to avoid the traps many brands fall into, such as selling on consignment. “It’s a really dangerous moment with a lot of department stores,” Yirmiyahu said. “They’re not emotional about the product they’re bringing in.” Added Lippes, “We don’t have big investors to answer to, so if a department store wants to bring us into 10 stores on consignment, we are in a position to say no.”

Instead, Lippes is focusing on building stronger relationships with wholesale partners who are genuinely enthusiastic about his work. He regularly holds seminars with store employees introducing them to the product and checks in personally with those on the sales floor to see what’s selling and what’s not. “We went to the stores uptown last week just to say hi and see how things are doing,” he said. “There’s a lot to be learned from that.”

As for entering new product categories, Lippes plans to take things slowly, starting with a sandal that will launch on Net-a-Porter at the end of February. A small handbag line is currently in development. Andwhile the designer aims to, one day, open standalone retail stores, he said the company won’t do so until it can afford it. The label remains small, but healthy, currently employing 11 people, three of whom previously worked for Lippes at ADAM.

“The strategy before was, ‘How fast can we grow? How much stuff can we make? How big can our office be? How expensive can our fashion shows be?’” he said. “It’s not about that now. It’s very thoughtful. We don’t have to take over the world right now.”