At the debut runway show of fashion's most prolific collaborator, BoF finds a collection packed with quintessentially 'Alexa' pieces, sure to be catnip for her many fans.

At the debut runway show of fashion's most prolific collaborator, BoF finds a collection packed with quintessentially 'Alexa' pieces, sure to be catnip for her many fans.

Alexa Chung after her debut runway show in London on Tuesday | Source: Courtesy/Mitchel Sams
Share
Comment
By Osman Ahmed May 31, 2017 01:26

LONDON, United Kingdom — It was only a matter of time. After a decade of being the most sought-after “It” girl for countless brands, from Marks & Spencer to Chanel, Alexa Chung is lending her well-boned visage to her very own fashion line – and, well, it couldn’t be more her.

In her debut show at the cavernous Danish church in St Johns Wood, north London, Chung showed a full wardrobe of quintessentially “Alexa” pieces, from a lilac latex pinafore to a yellow tiered floral dress and a whole array of Sixties-inspired staples, from a Françoise Hardy motorcycle jacket to a beige Peter Pan collared trench and a space age silver leather a-line dress.

There was even an children's choir and burst of confetti to mark the occasion. “The first season is about getting to know it,” said Chung after the show, dressed in an olive green Lurex dress of her own design. “Although, having said that, there was a this narrative about a posh west London girl corrupted by a music scene and getting sexed up.” 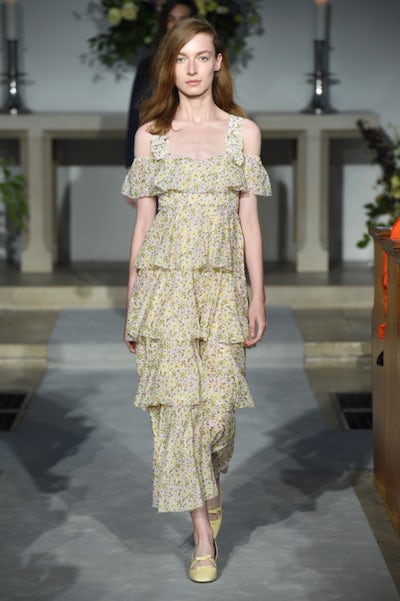 The result was a collection that filled the void left when Luella Bartley closed her cult label in 2009, which was known for collections titled “Daddy, I want a Pony” and “Daddy, who were The Clash?” Chung, 33, happily welcomes the comparison – Bartley is one of her favourite designers – and acknowledges that the ‘60s and ‘70s will be a perennial source of inspiration going forward.

She also added that there will be a narrative every season to avoid it looking like a “a spray of clothes that you’d find on my floor” and with a team of 17 people working on the brand, including managing director Edwin Bodson, who joined from Haider Ackermann in Antwerp, there is certainly scope for blue-sky thinking.

So what is it exactly about Alexa that is catnip for fashion consumers? It’s fair to say that her personal style has become ubiquitous with more than a couple of generations. Most notably, there was the “granny chic” look that took the British high street by storm at the end of the ‘00s – oversized cardigans, chunky ankle boots, floral tea dresses and antique-look jewellery come to mind. Heightened by her appearance at all the right parties, it cemented her reputation as a sartorial prophetess for young women who didn’t want to wear microscopic bandage dresses and crystal-embellished velour tracksuits.

What really distinguished Chung from other clothes horses though, was her ability to adapt runway trends to her own personal style, a skill that caught the attention of major fashion brands including AG Jeans, Superga and Madewell. When Mulberry named a buckled satchel after her in 2009, and Chung was subsequently photographed actually using it (rather than just wearing a paper-stuffed version for a photo op), it transformed the British brand’s fortunes. The next year, it posted a 79 percent increase in sales. Subsequent celebrity-christened bags never quite hit the Alexa spot.

“It’s been a long time gestating,” she says of her decision to launch a brand now. “I started doing this when I turned 30. Any time before then, I was either having too much fun or too far away in New York or working too hard on everything else, doing five jobs simultaneously.” 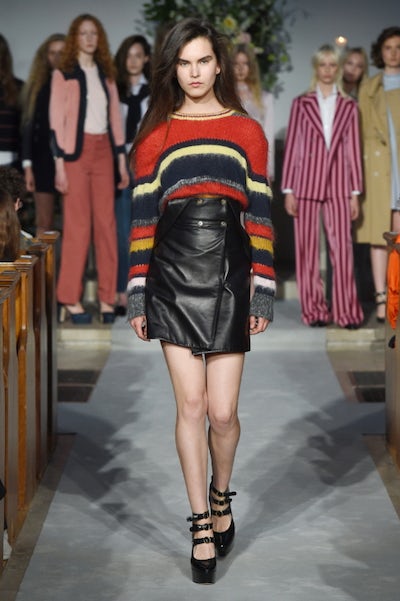 Of course, Chung is not the first celebrity to have leveraged her following into a fashion label. “I don’t see it as a negative,” she says of the celebrity-turned-designer affiliation. “If you compare most celebrity fashion lines to Raf [Simons] or Christopher Kane, then, yes, they fall short. If you think of them for what they are, which is people who have gained some kind of following for their style who are indulging in their joy and love for that, then it is what it is. I’m not making ultra forward-thinking, mind-blowing creations. What I do want to make is lovely jumpers that will last you for a few years that you can wear or love or jeans that will make your bum look nice.”

Chung is eager to ensure the positioning of the brand is relatively accessible (t-shirts start at £75 and leather jackets may go for £1,350), and from Wednesday, the “see now, buy now” collection will be sold at 55 luxury retailers including Selfridges, Galeries Lafayette, Matchesfashion.com, MyTheresa and SSENSE, as well as a dedicated e-commerce platform.

The brand will focus its launch activities in London, New York, Paris and Hong Kong, and Chung is making use of her cultural capital by developing bespoke content for selected retail partners. For MyTheresa, Chung came up with the idea of a video in collaboration with British musician Mike Skinner, an old friend, and the result is a film directed by Skinner himself. What’s clear is that if anyone can leverage their starry circle and social following as major marketing drivers, it’s Chung.

Chung’s new venture is being financed by Peter Dubens, co-founder and managing partner of Oakley Capital Private Equity which also backs the British designer Bella Freud, as well as Pembroke VCT, and a group of private investors. And with a full collection of denim, daywear, eveningwear, shoes and jewellery, ready to be dispatched in countless colourways and variations, it seems Chung is ready for big business.

Does this mean the end of her decade-long reign as brand ambassador and collaborator-in-chief? She likens the situation to childcare. “It’s like I had a baby and I have to call the nanny when I consider going out,” she proffers. “I can go out and have fun but only when the nanny’s around.”