The Italian luxury footwear label, co-founded by Edgardo Osorio in 2011 and known for its colourful designs and craftsmanship, has a new vertical retail strategy. The brand will open nine new stores this year, with the aim of establishing the brand in key markets.

“The first Aquazzura store was in the Palazzo Corsini in Florence and we were lucky to have this location inside the 17th century palace, with beautiful frescoes. It was very much in the spirit of the brand,” Osorio tells BoF. “But we wouldn’t be able to reproduce that store elsewhere. It got me thinking: What is retail now and how do you give that experience to someone?”

The solution, he decided, would be to offer localised stores, personalised to complement each location. “You wouldn’t decorate a house in New York the way you would in Miami or London. There’s a certain DNA but you wouldn’t have the same furniture. You might not even use the same colour palette necessarily.”

The design of each of Aquazzura’s new and existing stores will take inspiration from the city in which it is located. “In Dubai, there might be some Middle Eastern-inspired architecture [which often includes terrazzo tiles and an earthy palette]. In London, it’s inspired by an English townhouse with a fireplace and stucco ceilings,” he explains.

In tandem with the design differentiation, 30 to 40 percent of the product selection will vary for each store. The offering will include different colours and styles as well as designs created exclusively for those locations. “People nowadays travel everywhere, yet retail is so repetitive. It’s always the same stores with the same windows in every major city in the world,” Osorio says. “If I travel somewhere, I don’t want to go to the same shop that’s around the corner from my house. I want to go somewhere different.”

Aquazzura’s footwear comes at a range of price points — £335 for pool slides; £480 for heeled sandals; and £1,070 for a pair of embroidered ankle boots — and has been worn by red carpet stars from Amal Clooney to Jennifer Lawrence and Nicole Kidman. (In comparison, a pair of Manolo Blahnik pointy toe pumps cost £545, while Louboutin's iconic 100mm Pigalle shoes cost about £495.)

After tripling its business between 2014 and 2016, the self-financed label recorded annual average growth of 20 percent in 2016 and 2017, according to Jean-Michel Vigneau, who joined Aquazzura as chief executive in 2015. “We reached over 100 million euros business volumes in retail value in 2017 [and we] are forecasting double digit growth in 2018." Aquazzura’s success comes at a time when demand for luxury footwear is booming. In 2015 the global luxury footwear market grew by 4.4 percent to reach $28 billion and is expected to reach $36 billion by 2020, according to Euromonitor. 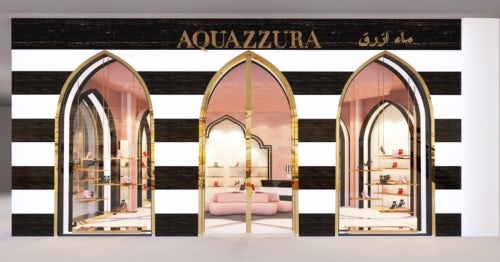 “Since the beginning, our retail strategy was already clear and we knew we had to increase our distribution, but test the efficiency of our retail model,” Vigneau continues. “It took two openings before we were confident in our business model and that’s when we started to accelerate our retail expansion, in 2016.”

Aquazzura had 17 branded locations worldwide in 2017, including direct retail (which accounted for 20 percent of the business) and wholesale partners (80 percent). For 2018, the split will be 35 direct retail and 65 percent wholesale, as the brand plans to have 26 branded locations, including 18 monobrand stores globally, by the end of the year. Part of the expansion includes opening three new monobrand stores across the US, followed by two more in 2019, as well as launch new stores in Qatar, Dubai, Milan, Brazil, Paris and Hong Kong.

“We’re focusing on markets where we’ve seen strong performance. In terms of strategic regions, we are focused on the Middle East and are targeting Asia through local partnerships,” Vigneau says. In 2017, Aquazzura debuted a new partnership with Chalhoub Group, one of the biggest distributors of fashion and luxury goods in the Middle East. The brand is also concluding the terms of a partnership with a firm in Asia, according to Vigneau.

Meanwhile, Manolo Blahnik plans to open new stores this year in Qatar and Singapore, and is also launching its first dedicated men's store in London. (The expansion plans come after sales jumped nearly 25 percent to £11.7 million in 2015.) Christian Louboutin, which celebrated its 25th anniversary in 2017 and is said to sell over 700,000 pairs of shoes a year, is focused on growing its beauty business, having signed a new global licensing agreement with Puig.

Looking ahead, the challenge for Aquazzura is “being able to hire all the right people to allow us to grow at the rate that we want, because we have so many different projects in the pipeline,” Vigneau says. “One of the challenges in the next two years will be to brand ourselves as a lifestyle brand. We want to launch men’s footwear next year. We’re also planning a big launch in Florence that will include fragrances, eyewear and more.”

“In today’s market, customers want energy and constant creativity,” says Osorio. “I believe that the future is a combination of retail and online. It’s not one or the other. Every major online player is getting into retail as well because you need that physical aspect, the showroom. For us, I think we need to focus on key cities and places and then the rest is online.”