The luggage start-up is winning over investors by promising to disrupt a sleepy consumer category  — and turn a profit at the same time.

The luggage start-up is winning over investors by promising to disrupt a sleepy consumer category  — and turn a profit at the same time.

NEW YORK, United States — Direct-to-consumer luggage purveyor Away has been checking off start-up milestones left and right lately: last year, the company opened its first stores, and turned its first annual profit. And now, a $50 million funding round.

“Because these companies are able to scale a lot faster now, and because the consumer has shifted so much online, the [direct-to-consumer] category has become one that venture capitalists are a lot more open to,” said Eurie Kim, a partner at Forerunner Ventures, one of Away’s three lead investors in its latest round, alongside Global Founders Capital and Comcast Ventures. “There are a ton of opportunities here.”

Luggage is a particularly ripe target. Sales have risen steadily over the last few years, even as accessories categories, like watches and handbags, have had a more uneven track record. Away’s sleek and affordable carry-on luggage, easily purchased online, appealed to younger travellers who felt ignored by established brands.

The popularity of some of its initial offerings helped Away save on marketing costs, allowing the company to turn a profit faster than many other direct-to-consumer brands, Comcast Ventures partner Daniel Gulati said. When shoppers told the company that they wanted a slightly bigger carry-on than its prototype, Korey and Rubio went to multiple airports to measure each airline’s carry-on sizing tool. The result? Their best-selling item, the “bigger carry-on,” which sells for $245. Away says its sales are on track to cross $100 million this year. 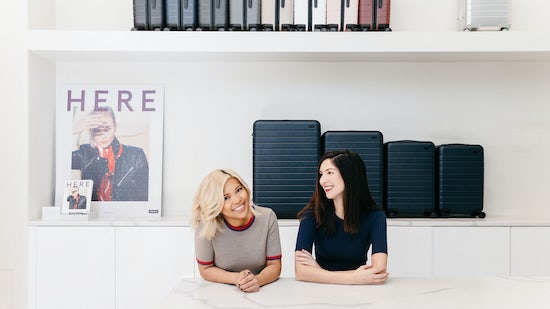 “A lot of direct-to-consumer e-commerce companies — especially those that are venture-backed — are driving growth through unsustainable marketing costs,” Korey said. “But we feel that it’s important to build a retail business that supported itself.”

“They haven’t gotten drunk on venture capital and are being disciplined with expenses,” a rare combination of factors among direct-to-consumer start-ups, he said. Since 2016, Away has raised $81 million in funding.

Away plans to use its new funding to open six additional stores this year, for a total of 10, and to expand overseas. The brand is available in 38 countries, including 20 in Europe serviced by a fulfillment center that opened in April, according to Korey.

The company will also branch out from luggage, part of a broader effort to pitch itself to consumers as a travel lifestyle brand. Away publishes a magazine, Here, and last year opened a temporary hotel concept, Chez Away, to coincide with Paris Fashion Week. The pop-up project included collaborations with Madewell and Pop & Suki, and featured amenities like in-house tattoo artists and manicurists.

Rubio said the brand is planning more projects like this, intended to reinforce the message to “make travel easier.”

“It could be anything from hotels to booking sites and airlines,” Rubio said. “When we think about hotels [for example] there are many ways we can make that come to life, whether it’s something we do ourselves or through strategic partnerships.”

LVMH to Buy Majority Stake in Germany's Rimowa For $716 Million