NEW YORK, United States – Cardi B was late. But an equally famous face – at least among the crowd of teenage girls, patient moms and makeup artists attending the fifth annual Beautycon this past weekend – was ready to take her place.
As Manny MUA (Instagram follower count: 4.6 million, profile: “I think boys deserve just as much cosmetic recognition”) took the stage, the chorus of groans that followed the Cardi B announcement turned to thunderous applause. He moderated a panel featuring an international cast of influencers-turned-entrepreneurs, including Wuzzam Supa, Courtney Adeleye, Liah Yoo and Tokyo Stylez.

The group agreed on a few key points: influencers can’t just shill their personal brands (Supa noted she worked with “30 palettes from 30 different companies”), but influencer-founded lines have an advantage over incumbents because they each have built a “tight community” that transcends traditional market segmentation. 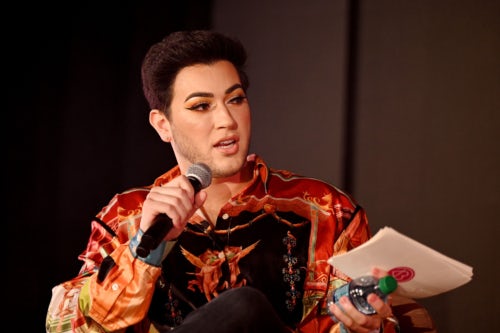 “There’s a pretty low barrier when it comes to ethnicity and gender” when it comes to skincare, said Yoo, calling acne “very universal.” By contrast, when it comes to makeup, consumers flock to influencers whose appearance they connect with, though those loyalties quickly become very strong.Beautycon’s setup at the Jacob Javits Center wasn’t the endless maze of booths typically seen at consumer-facing conventions.

The crowd (13,000 people over the course of two days) was also more diverse than other beauty events. Where Goop has wealthy white women on lockdown, the Beautycon crowd was comprised of influencers, wannabe influencers and the influenced. The latter category reflected a cross-section of pre-teens chaperoned by their moms, makeup artists looking to network and plenty of ordinary people above the legal drinking age. All were eager to grab freebies or deep discounts on their favourite beauty brands.

These beauty free-for-alls are proliferating, with Sephora hosting its first convention last October and QVC planning a beauty festival in June. These events have become a vehicle for brands to interact directly with fans and customers beyond Instagram. It’s a way for a brand to extend the connection they work so hard to forge online, and hopefully convert fans into loyal customers for life.

In person, this means companies try to one-up each other with elaborate installations, each competing to become the “most Instagrammable” moment, as measured by how many attendees upload pictures with a branded hashtag.

After all, where else can brands simultaneously pitch 12-year-old Madison Seidel and Marquis Neal, a blogger and plus-size men’s fashion stylist? Seidel had just come from waiting in a line that snaked around a massive replica of Too Faced’s Better Than Sex mascara to buy products at 40 percent off. Though they shared little in common, demographically speaking, both cited Better Than Sex as their favourite beauty product.

This past weekend, I observed a live curly hair tutorial, Curls in Bloom: Spring Approved Curly Styles, watched a zodiac-based makeup demonstration at the Target booth and almost posed for a photo with a giant bottle of Dove body wash. I was propositioned, and politely declined, to try hair extensions more than once. At the Alcon booth I did sample colour contact lenses, which due to more natural looking styles and endorsers like Lupita Nyong’o and Kim Kardashian, are making a comeback. Justin Timberlake “Seniorita” was blaring in the larger of the two halls, which was home to large scale installations from mass beauty giants like L’oréal, Maybelline, Rimmel, Sally Beauty, Revlon and Limecrime, where a presence at the convention seems to be mandatory.

Noticeably absent: prestige labels, Too Faced being the notable exception. Beautycon chief executive Moj Mahdara acknowledged this hole in the lineup, noting that her efforts to “rally and advocate” for high-end brands to get involved has largely fallen on deaf ears.

“They have to be willing to reconsider what the beauty audience looks like,” she said of beauty conglomerates rooted in the prestige category, many which favor intimate industry parties attended by VIPs over events like Beautycon that let in regular people.

“I think it’s the end of the era where mass and prestige are two different categories. Consumers don’t see it that way,” added Mahdara, who’s trying to get brands “to go beyond the male gaze.”  “Look at music, culture and fashion. It’s become about urban culture, it’s about inclusivity and diversity, seeing everything through a new lens. These consumers [at Beautycon] were demanding and wanting a highly curated beauty experience and we gave them the best that we could. I would like to see 40 more brands there.”
As for Cardi B, whose appearance ended up starting four hours late, the singer talked about financial literacy for women during a “Making Money Moves” fireside chat with Mahdara.

"Do you know how many people’s bills I pay? Like 10,” Cardi B said.
“She’s worth the wait,” said Skye Taylor, a 28-year-old freelance makeup artist. But Beautycon offered plenty of other thrills, including meeting influencers Princess Bellaaa and Glow Princesss.

When I met her, Taylor was waiting in line at the Fashion Nova booth with pal Sweet T. The two dropped everything when Jason Lee (founder of Hollywood Unlocked who goes by @theonlyjasonlee) walked by, who climbed over velvet ropes to meet the friends. A look of horror washed over Taylor’s face when I asked who he was, which made me feel really old, but I redeemed myself by taking a photo of the two for Taylor to post on Snapchat.

THIS WEEK IN BEAUTY
Poosh is here. The only Kardashian sibling without her own brand, Kourtney, now has a lifestyle website. Naturally, she posted a series of nude photos on Instagram to mark the launch of Poosh, a nickname Kardashian uses for her daughter, Penelope.

Movie stars want to cash in on their influence too. Michelle Pfeiffer launched her first beauty line with a collection of ‘clean’ fragrances this week, but whether her celebrity and a unique product are enough in a market that rewards whichever start-ups generate the most buzz on social media remains to be seen.

Shiseido is cosying up to younger customers. The Japanese beauty giant is upping its influencer marketing spend by 50 percent this year through partnerships with The Coveteur, Stylehaul and MikMak.

Foreo might be for sale. The Swedish beauty company, known for its toothbrushes and electric facial tools, could reportedly sell for as much as $1 billion.

QVC links with Carmindy Beauty. The shopping platform will introduce its first exclusive beauty brand this fall, a collaboration with Batallure Beauty, which caters to all women “regardless of age or skin type."

The downside of glitter in beauty products. Apparently, the only purpose glitter serves is to make Instagram posts look better, as it’s not good for your skin or the environment.

Morphe could be beauty’s next unicorn. The brand is said to be exploring raising capital, following reported sales of $350 million last year.