LONDON, United Kingdom — So intrigued were fashion industry followers when INDUSTRIE magazine's first cover, featuring Anna Wintour, was leaked last week that the Internet was ablaze with rampant speculation about what this magazine about the "culture of fashion" might be like.

Over at fashion website Styleite, they were "waiting with bated breath" to thumb through its 196 pages. Sassybella implored its readers to "hunt down a copy" and find out who's on the masthead. Members of The Fashion Spot wondered who took the cover photo. Was it Inez and Vinoodh? An outtake from Vogue Hommes International? And, everyone seemed to agree that this was going to be a unique magazine for the fashion business. 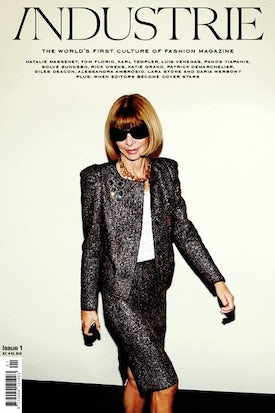 Indeed, unlike the legions of other fashion magazines hoping to be the next LOVE or POP, INDUSTRIE turns the spotlight back on the fashion industry itself, "as the first and only media title dedicated to going behind the scenes to chronicle the personalities, stories and defining moments in the world of fashion" through interviews with some of fashion's biggest stars, as seen by the industry's hottest photographers, stylists and writers.

Today, BoF has an exclusive first look inside INDUSTRIE as well as answers to all of those questions burning up the Internet, directly from Editors-in-Chief Erik Torstensson and Jens Grede, co-founders of the Saturday Group.

But first, to the magazine itself. Does INDUSTRIE live up to all the hype?

For the most part, yes. From in-depth interviews with Natalie Massenet, Tom Florio and Katie Grand to nude shoots with Lara Stone and Daria Werbowy shot by Patrick Demarchelier, the two enterprising Swedes flexed their industry relationship muscle to gain behind-the-scenes access to fashion's power players, many of whom have very rarely opened up so publicly, on the record. And, given the list of contributors, it's not surprising that the photography and styling are slick and sophisticated.

Sure, there may be a whiff of AnOther Magazine and Fantastic Man in some of the editorial formats, and I couldn't help but wish for even more depth from some of the interviews, but it's a strong debut for a magazine trying out a new editorial concept. Some of the most clever features include "A Day in the life of Erdem" cartoon and a truly wicked shoot of Rick Owens in his element during a rigorous workout. 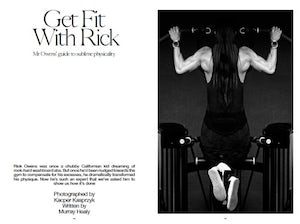 Overall, INDUSTRIE brings together the kind of content that industry watchers may never have been able to find in one publication before. It's like the fashion industry's version of a high-school yearbook, except seriously more stylish and elegant, showcasing the fashion industry's stars in their best light. This alone will have fashion insiders lining up to buy the magazine when it debuts on newstands in a few weeks — and perhaps more importantly, jostling to be featured in the issues to come.

After leafing through a sneak preview copy of INDUSTRIE on my iPad, I sat down with Jens and Erik in London to get a feel for their vision for INDUSTRIE and where they'd like to take it.

BoF: It's a pretty daring time to be launching a new magazine. Do you expect this magazine to make money or is this a simply project of passion?

JG: It's 100 percent a passion project. There is no real business rationale for it. We are not in the magazine business, we are in the business of making a magazine.

BoF: So why launch this magazine now?

ET: This kind of magazine could not have existed before. This is the right time for INDUSTRIE, a magazine about the industry of fashion because fashion, which was once a closed, is now very open. The rise of fashion blogs and films like The September Issue means there is more interest in the fashion industry than ever before.

BoF: And perhaps it is also further proof that now is the time for niche magazines?

JG: Yes, I think that is one direction where the media industry is going. We either have 'blockbusters,' whether that's Avatar or American Vogue, which will always do well or we have very specialised magazines, say for example if you're into tractor pulling in Sweden, for which there are five titles. There was a book called The Long Tail which said that the blockbuster would die because it's all about niche content, but as it turns out, the head of the snake is doing very well and so is the tail. It's if you're in the middle, say like Esquire, that you're in a very tough position. 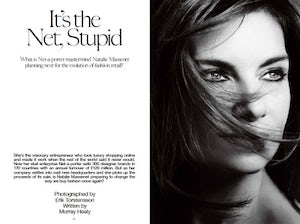 ET: That's why we didn't want to do just another fashion magazine. We're really tired of all these magazines with ten fashion stories by unknown photographers created just for the sake of putting out a fashion story, with no real point of view. American Vogue and French Vogue already do this and they are the best in the world, so why even try?

JG: Plus, you have to question the editorial integrity of these kinds of independent fashion magazines, especially in the current recession. By definition, they are geared towards advertising in order to exist. They have to feature Armani and they have to feature Dolce in their editorial, because otherwise the brands won't advertise. If they don't advertise, the magazines cannot exist. The result is that the editorial is so diluted in these magazines that the reader isn't looking there for fashion inspiration anymore. Instead, a lot of it is happening online, a lot of it is happening in store, a lot is happening in a peer-to-peer fashion.

BoF: Let's talk about the online component for second. The first story in INDUSTRIE is a conversation with Tommy Ton about how editors are becoming becoming household names in their own right, outside the inner circle of fashion insiders. Does that also mean there is a broader audience for INDUSTRIE or is this just a kind of industry navel gazing? 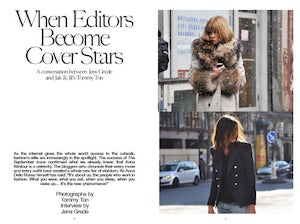 JG: In one sense, INDUSTRIE is definitely about the navel gazing. We want to talk to the 15,000 or so people around the world that actually care about this stuff. The rest of the people should read whatever it is they are interested in.

ET: But there is a second layer to all of this as well. You of course have these 15,000 people within the industry, but you also have people in a small town in Sweden, for example, where I come from, who once used to know who Madonna was, but now they know who Kate Moss is, and who Emmanuelle Alt is as well.

BoF: So the ultimate audience for INDUSTRIE could be much larger than 15,000 insiders?

JG: I have no idea exactly how big it could be. At the end of the day, our motivation is very clear: I didn't know where to read about the stuff that really interests me. When I did read industry profiles in the media landscape that is out there, it was never in depth enough for me, it never asked the questions I really cared about, it was all too superficial. We did this magazine to answer some of the questions we wanted to ask. Exactly where that will take us, we don't know. I would hope we would become more in-depth, more specialised, with longer pieces and more criticism. In this way, we may end up becoming even more niche.

BoF: Okay, so if this is about industry insiders why did you put Anna Wintour on the cover? Of all the people in the industry who were available to you as cover stars, she's maybe the ultimate insider but she is already household name. Was this decision more of a PR thing to create a bit of buzz?

JG: No, we didn't really think about it that way. It simply makes the point we wanted to make. If we are writing about editors becoming cover stars, she's the one that makes that point best. Obviously you have to have a cover star that sends a clear message.

BoF: I noticed that the credit for the photo of Ms. Wintour is sourced from Getty Images. Did she know she would be the cover star of your first issue? Have you had any reaction from her?

JG: We told her and we told Tom Florio...

ET: But we haven't had any reactions...yet.

INDUSTRIE Magazine will be available on newsstands during the week commencing 24 May, 2010.