LONDON, United Kingdom — As perhaps fashion’s single most authoritative (and opinionated) journalistic voice, Cathy Horyn’s 30-year newspaper and magazine career has been anchored in old-school reporting, a profound understanding of the creative process, and an unerring ability to cut through the industry’s smoke and mirrors.

After tenures at the Washington Post and then Vanity Fair, it was Horyn’s 15 years as the New York Times’ chief fashion critic that provided her with the platform to observe, judge and sometimes publically scrap with fashion’s most significant players.

When, in January 2014, she announced her decision to step down — to spend more time with her ailing partner Art Ortenberg, who subsequently passed away — a void was felt throughout the fashion community.

But with fashion becoming more newsworthy than ever before, it seemed inevitable that Cathy Horyn’s byline would return to the fore. This past season was her first as critic-at-large for The Cut, New York magazine’s lively online fashion platform, and once again, her dispatches from the shows have proven as thought-provoking as they are polarising.

Back in February, the day before she would formally return to New York fashion week, Cathy generously invited System over to her snow-clad, Hudson Valley home for lunch (homemade soup followed by gingerbread) and a chat about her life, career and today’s fashion landscape. The following is an excerpt of this conversation.

I’m fascinated by how fashion critics are able to assimilate and pass judgement in what used to be a matter of hours, but is now probably a matter of minutes, maybe even seconds.

First of all, I should say I don’t go to a lot of shows, not nearly as many as the other people do, because I only want to write about the newsmakers. I don’t want to feel like I have to go, believe me I’ve done that. But when you’re seeing these collections, season after season, you can sit at a show and know in a heartbeat what’s new, what’s striking, what’s newsworthy.

Do you think a designer can be important or significant without being newsworthy?

For me, there were those New York designers like Oscar [de la Renta] or Bill [Blass] who had great businesses and they made great stories. You can’t compare what they did to what Helmut Lang did. If I was Women’s Wear [Daily] and felt like I had to cover the industry then I would look at it differently, but I’m not Women’s Wear. I’m looking to write stories that are newsworthy.

By being selective about the number of collections you review, is there a fear that you might miss something that’s really interesting or relevant? Or do you think you instinctively make the right choices?

What do you think gives authority to the critic?

A couple of things: longevity and being free of influence. You’ve always got something influencing you, but you should work at keeping some distance from that. You just have to say what you think.

Is that the hardest thing?

No. One of my toughest reviews was for an Oscar [de la Renta] show and it was the one he loved the most. Same with Tom Ford. Tom got so upset with me about something… but when I left the Times, a lot of these guys were like, ‘You said things that were terrible, that really hurt me, but you were right!

Does that make you feel proud?

I just like saying what I think. Amy [Spindler, former fashion critic and style editor for the New York Times] used to say to me all the time, ‘Cathy, shut the fuck up, you’re always sat in front of your screen, laughing at your own jokes.’ And she was right: I love to see things that are really great — really great or really bad — that make you think, and I love going back and writing about them.

Do you think that the rigour and thought process of being a critic is something that can be transferred into other fields? If given time to learn those particular fields, could you become, say, a theatre critic or film critic or an art critic?

Yeah, I think so. I mean, I could never become a TV critic for instance, but with enough time and patience maybe I could be a movie critic, or a book critic. Critics are drawn to their medium: art critics obviously have some fascination for the creation of new art and the personalities in art. I find fashion people more appealing than most artists. Maybe because of the business side, which I really like, maybe because I love the phoniness of fashion. These days, the phoniness is not so much fun as it was in the ‘90s. Bill [Blass] was a big phoney, Oscar was a huge phoney. They came and they charmed and they swaggered, they flirted with the customers, and yet they were great people behind that façade.

I guess Karl [Lagerfeld]. I mean, he doesn’t necessarily spend so much time with the customers but he gets on the stage and he performs. Tom Ford does it, too. But they are old-school guys. Today I think that the economics of fashion has affected everything in the industry. It’s not about aesthetics, it’s not about pleasure, it’s certainly not about charming people…

To what extent do you take into consideration a designer’s scale of business, or their sense of history, when it comes to reviewing a show?

Armani and Thomas Tait are almost two different industries. I mean, I really like Armani: I like the business, I like him as a guy. I like that he has achieved so much, I like all the crazy people who work for him. But honestly, it’s very difficult to write about the clothes. I think for a critic it’s almost better not to attend; I can’t write in a critical way about Armani because there’s very little to say. He’s a made guy, he’s not going to change how he does things, there’s not going to be any particular newness.

Surely Armani’s sense of history — the company is 40 years old this year — makes it newsworthy?

Well, I think about what his shows were like back in the late ‘80s and they were so beautifully done, as well as being great-looking clothes. I mean, you would kill to have some of those jackets and pants today. And the quality was insane. His presentations were just heaven, but now they’re in this new space. I asked Armani about all this when I did an interview with him last year, and the great thing about Armani is, if you tell him straight what you really think, he doesn’t go crazy, and he listens to what you’re saying. He said to me, ‘Look, you’re not the only one buying these clothes, it’s not just about you, I have clients all over the world.’ And there’s your answer. I like him, but I just wish I’d known him in the early days.

Can you genuinely be friends with a designer who is going to be the subject of your reviews?

I think you can hang out and have an affinity for certain designers, but I think that if you believe you are truly friends then you are in for trouble. And it’s not good for your professionalism nor good for your copy, if you believe that. The other side of that is if I don’t like something someone has show on the runway then I have to be able to say it to their face.

And not hide behind words?

No, because they probably weren’t relationships. The people who got mad at me are still very friendly with me, but we don’t go on vacation together. We don’t go to dinner together. I can still walk into their studio though, even though they yelled at me five years ago. I mean really yelled. It’s fine.

Would you agree that the most significant aspect of fashion right now is how immeasurably bigger it is, compared to 20 years ago? More brands, more CEOs, more media coverage, more product, more consumers, more everything. Is that a good or a bad thing? Or do you feel indifferent to it?

I don’t feel indifferent, and I don’t think it is a good or a bad thing. I just tend not to look at it. I mean, there are definitely negatives about it, in that it’s harder for people to focus on things. Momentum is created by these niches but it seems strange to have all these brands yet with very little innovation going on.

Is this era defined by a sense of quantity over quality?

If you look at it from a strictly fashion point of view – and you think of the contributions and the design changes that happened in the 60s and 70s, and in the 80s you like at designers like Kawakubo – then I think we are going to be missing that in the two thousand and teens, or whatever we call this era. Where is the Kawakubo of today? Or the Martin Margiela or the Helmut Lang: those people who really made a statement about their time? I don’t think anyone is going to dispute what I’m saying; we just don’t see those kind of people emerging now.

Do you think that today’s fashion press has become distracted by the branding machines behind some of the big designers? Do the huge company structures, the big advertising spends, the brand ambassadors, the celebrities, and all the PR and marketing actually eclipse any objective analysis of a collection? It sometimes feels like the collections are made into a success before they’ve even been presented.

Do you find yourself guilty of becoming distracted by all that?

I try not to be, because I have a particular bug in my ass about exactly what you’re describing — about the branding. I don’t even like that word.

So you consider all the branding fanfare as a negative distraction? 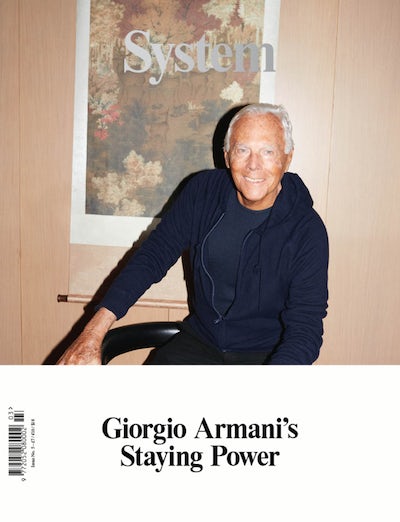 I remember Suzy Menkes writing about this in the [International] Herald Tribune about five years ago. She was going on about branding this and branding that; of course, she was absolutely right, that did happen, and the importance of branding has become key. But then it started becoming a part of her writing, there was just too much of an embrace of that language and the methodology that those companies were using. And I thought, ‘Wait a minute, Suzy, why are you working for these people? You work for a newspaper and you’re a critic, please try and stay somewhat independent of that thinking.’ Suzy won’t like me saying that, she’ll say that I’m a… well, she will say what she will say. I mean, people could say that I’m being a Pollyanna about this, but it’s had a terrible influence, I find it polluting.

The complete text of Jonathan Wingfield’s interview with Cathy Horyn appears in the Spring/Summer 2015 issue of System Magazine.