LONDON, United Kingdom — The Business of Fashion can exclusively reveal that Condé Nast will launch its long-anticipated e-commerce venture this autumn under the company's existing brand Style.com. The company described the move as involving unprecedented cooperation between Condé Nast’s American and international arms, underscoring the scale of the company’s ambition in targeting the $1.5 trillion global e-commerce market.

Style.com, which currently hosts fashion news and runway coverage, will be transformed into a global e-commerce destination, while its editorial content will be migrated to a new url, voguerunway.com, under the umbrella of American Vogue. The company did not disclose a specific date for the moves, saying only that they would happen sometime in the autumn.

Launched in 2000, Style.com was originally conceived as the online home of Vogue, which did not launch its own web presence until 2010, despite being one of Condé Nast’s most powerful and recognisable brands. In recent years, the two sites have produced overlapping fashion news and runway coverage and the move to recast Style.com and fold its editorial content into Vogue will correct what some perceived to be a strategic error and end the duplication of cost associated with running the two websites, while leveraging the brand equity built up over the years in Style.com.

“Vogue.com in the US is going through a massive growth period,” Bob Sauerberg, president of Condé Nast, told BoF. “We are investing into it and expanding it to create that as our premium digital fashion destination. It’s about getting behind Vogue.com and taking much of the content at Style.com and bringing that content and the audience over to Vogue.”

According to statistics provided by Condé Nast, Vogue.com has seen a 160 percent rise in unique visitors from Q1 2014 to Q1 2015, as well as a 345 percent lift in traffic from social media during the same period. In March, the Vogue.com website received more than 6 million monthly unique visitors according to data cited from Omniture in Vogue’s media kit. 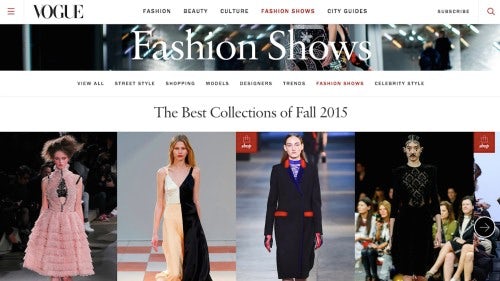 The move to transition Style.com content under Vogue was foreshadowed by a new reporting structure, announced last November, that saw Style.com editor-in-chief Dirk Standen and publisher Matt Rice report to Vogue publisher Susan Plagemann and Vogue editor-in-chief and Condé Nast artistic director Anna Wintour, respectively. The new shift in strategy will result in some redundancies at Style.com in the US, though the company declined to disclose details, saying only that most of the Style.com team will join American Vogue to work on voguerunway.com. In December, Style.com announced that it was suspending publication of its print magazine.

Meanwhile, Condé Nast’s interest in e-commerce has been prophesied by several investments in start-up fashion e-tailers like Moda Operandi, Farfetch and Vestiaire Collective — companies with whom it will now compete. It has also experimented with e-commerce at its own publications, combining Lucky Magazine with e-commerce platform BeachMint to form a new company, The Lucky Group, in 2014.

In this way, Condé Nast’s new e-commerce venture is the result of stars aligning to form a constellation of opportunity around three points: the company’s ambitions in global e-commerce, the chance to eliminate the duplication of cost associated with running similar Style.com and Vogue.com sites, and the future potential of the Style.com brand.

“In some ways [Style.com] duplicated and overlapped the vision of Vogue.com in the US and it was decided that this was really a great brand name for what we want to do with e-commerce,” said Jonathan Newhouse, chairman and chief executive of Condé Nast International. “Even if Style.com hadn’t already existed it would be a great name.”

“Style is an extremely powerful brand. In many ways it is Condé Nast’s middle name,”agreed Franck Zayan, president of Style.com and previous head of e-commerce at Paris department store Galeries Lafayette. “As much as Condé Nast is about fashion, it’s about many other things. It’s about lifestyle as a whole. In one five-letter word it describes precisely what we are building: a lifestyle destination for commerce.”

The new venture will launch in the UK this autumn, followed by a move into the US in early 2016 and further expansion into Asia and other major European markets in the years to come. Ultimately, the global roll-out will target the full audience of the company’s media brands — a potential customer base of more than 300 million people, according to Condé Nast — who will be able to shop directly from editorial content.

“From the start, it is aiming at being a global project and growing very fast, being deployed in a big number of markets and bringing a layer of service to all Condé Nast publications,” said Zayan.

“It’s a $1.5 trillion marketplace that’s growing high double digits a year,” said Sauerberg of the global e-commerce opportunity. “We studied it hard in the US and it was very clear to us that scale was critical. Talking through opportunities with Jonathan [Newhouse], we were thrilled to find a way to do this together. So we structured this in a way that we believe gives us the best chance to succeed.”

That structure is a separate e-commerce venture within the Condé Nast conglomerate, which will pour over $100 million in investment into the new entity over the next two to three years — an amount greater than what the company typically spends to launch a new magazine — according to Jonathan Newhouse.

The e-commerce business will be headquartered in London’s Camden and will employ a marketplace model (meaning it will not take on the risk and expense of buying and holding inventory and will make money from a commission on sales), though carrying stock may become a possibility “in later stages” of the project, according to Zayan. The site will launch with between 100 and 200 brands with a product mix weighted towards luxury fashion, though it will also sell technology gadgets, beauty, gifts and art, reflecting Condé Nast’s portfolio of brands, which includes Vanity Fair, Glamour, GQ, Condé Nast Traveller and Wired.

“Probably, this will be the biggest — certainly one of the biggest if not the biggest — business opportunity we have pursued in the last two years,” said Newhouse, who has overseen the company’s investment in brand extensions including bars, clubs, restaurants and fashion schools. “It’s a major investment and we would only invest that time and money if we felt that it would return to us in profits. We see this as a very, very big opportunity.”

The UK launch is a “pilot” that will allow the company to test the waters before rolling out to the US and beyond, according to Sauerberg. But London is strategically positioned between North America and Asia and is also the home of Condé Nast International, as well as several leading fashion e-commerce businesses, including Net-a-Porter, Farfetch and ASOS, giving the city a rich talent pool. At the start of the month, Condé Nast tapped former ASOS editorial director Melissa Dick to become its editorial director of e-commerce. Some of the team behind the new e-commerce venture came “from other businesses like Yoox and Net-a-Porter and ASOS,” according to Newhouse.

The UK also spends more money online per capita than any other developed country, including the US and China, with the average consumer spending £2,000 (about $3,028) per year, according to a 2014 report from UK communications regulator Ofcom. This is significantly higher than the US, at £1,171 (about $1,773) per capita. “Britain is a very sophisticated, very high value, high penetration digital marketplace. The e-commerce penetration in Britain is even higher than the US,” said Newhouse. “And it’s our largest international market.”

In a fashion e-commerce market that is highly competitive and is consolidating, as seen in the recent merger of Yoox and Net-a-Porter, Condé Nast sees its edge as its unique ability to integrate commerce and content, harvesting the powerful purchase intent generated by its magazines.

“The most differentiating piece that we add to that is that we actually are in contact with the customer a long time before they actually become customers. We are in connection with that reader at the time they discover the product, the trend,” said Zayan. “If we’re able to go all the way from that point of inspiration to the point of transaction and then to the point of physical transaction and the interaction with the store, then we cover a much wider realm than any other player in the market.”

“Over the last several years, among our strongest advertisers have been the biggest e-commerce players. Yoox and Net-a-Porter are heavy continual advertisers,” noted Newhouse. “If these e-commerce companies are paying a lot of money to reach the people who read our magazines and use our websites, why should not we, who know our customers better than anyone, who have more information about and understand them and already have a relationship with them? Why should we not also offer them this service? Can’t we do it better?”

Other traditional media organisations have also made the move into e-commerce. Time Inc’s InStyle launched InStyle Shopping back in 2007. And, in September 2012, Harper's Bazaar, owned by Hearst, launched the shopping site ShopBazaar. But these attempts to make editorial shoppable have been clunky, pushing readers away from content to complete their purchases. Importantly, Condé Nast’s platform will allow users to buy products featured in editorials with a one-click, universal checkout that works across publications.

But according to Newhouse, at Condé Nast, the ‘church and state’ separation between editorial and commercial operations will remain in place. “We’re not going to have e-commerce people telling the editors or the photographers what to feature in the magazines,” he said. “I’m sure there will be some communication, but it is not a question of turning our editors into salespeople. That’s not our intention.” The fact that the new venture is a marketplace removes some of the pressure to shift merchandise, which would otherwise, under a traditional wholesale model, have already been bought and kept in inventory.

“Consumers have been asking for this for some time. And in some cases, our editors have been too,” added Sauerberg. “Our editors are still going to have control over their content on their platforms. They’re going to be doing what they’ve always done best. So there’s not going to be any change in terms of our operating approach. It’s set up as a separate company for a reason.”

Condé Nast’s new e-commerce venture is part of a wider drive to open new revenue streams in response to declining print advertising sales. “Our magazine business is strong. It’s still a great business and will be forever,” said Sauerberg. “Consider this e-commerce business one part of a big media company’s business. It’s not a story of one versus the other; it’s a story of ‘and’ — magazines and websites and video and, now, an e-commerce business.”

But while Condé Nast’s publications are world-class generators of inspiration and desire for fashion products, e-commerce is outside the company’s core competency.

“The hardest thing is always getting the best people — experienced, talented, capable people,” acknowledged Newhouse, saying that work on the project began almost four years ago. Zayan joined the venture in January 2014 and currently oversees a team of 80 people. “We’ve spent longer to prepare for this project than anything else in my entire career — and the reason is because it’s new.”