Can Francesca Amfitheatrof Save Tiffany?

Tiffany has cut profit forecasts and share prices have fallen and annual sales have hovered at just over $4 billion since 2014. 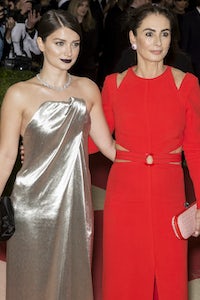 Can Francesca Amfitheatrof Save Tiffany?

Tiffany has cut profit forecasts and share prices have fallen and annual sales have hovered at just over $4 billion since 2014.

Francesca Amfitheatrof with Eve Hewson at the Met Gala in May | Source: Shutterstock
Share
3 Comments
By Bloomberg December 20, 2016 10:05

NEW YORK, United States — Police barricades still surrounded Tiffany’s flagship store a month after the presidential election, but the party inside, to celebrate a small collaboration with jewellery designer Eddie Borgo, was going forward. The launch had already been postponed once because of “post-election related activities” outside the store, which sits next door to Trump Tower on Manhattan's Fifth Avenue and 57th Street.

Guests mostly entered the side door instead of the main entrance, and security guards were posted in the corners of the room, even though all the jewellery had been removed from the cases, with the exception of seven pieces in the centre of the floor. Well-dressed fashion editors and stylists air-kissed and chatted amiably. And in the middle of it all, Tiffany’s design director Francesca Amfitheatrof wore a bright smile as she assumed her role as master of ceremonies.

In theory, this is exactly what the 46-year-old designer was hired to do: reinvigorate the 179-year-old institution with fresh energy. Borgo, an American, has a punky, jagged-edge aesthetic that has been celebrated by a new generation of in-the-know jewellery buyers. But to fit the simple, yet elegant aesthetic of Tiffany, the designer draped solid gold over bracelets and necklaces that had been fashioned with safety chains, giving them a more fluid quality. “We do something at our studio that's very specific,” said Borgo. “Tiffany—their audience is large, it’s not a niche brand. There are different things that you’re up against.”

In other words, how do you design jewellery that can appeal to everyone?

Few people are more familiar with this reality than Amfitheatrof, a part-Italian, part-Russian, Japanese-born, London-bred Renaissance woman who, over a peripatetic career, has designed tabletop accessories for Alessi, developed fragrances for private clients, and, for two decades, created jewellery at Chanel and Fendi under the direction of her mentor, Karl Lagerfeld.

In the three years since she came aboard, Amfitheatrof has given Tiffany a buzz it has not had in a very long time. Before the Borgo collection, she partnered with trendsetting Dover Street Market on a 2015 line called “Out of Retirement” that reinterpreted classic Tiffany styles. Celebrities have gravitated toward her as well: At the 2016 Academy Awards, Cate Blanchett wore a pair of Tiffany diamond drop earrings and ring while Reese Witherspoon dazzled in more than $1 million worth of Tiffany jewels. Earlier this year, former Vogue creative director Grace Coddington was brought on to direct the fall catalog, featuring actresses Lupita Nyong’o and Elle Fanning—the first time the brand has used celebrities in a campaign.

Her first collection, simply called T, signalled the new direction. The styles are refined with a subtle nod to the Tiffany name, yet the bracelets, which appear straightforward at first, veer off abruptly at a right angle, creating a T-shape at each end. The ends of the necklaces and earrings form slight smiles, adding a bit of whimsy. The collection is just the sort of simple, glamorous, effortlessly chic, and quintessentially Tiffany accessory. 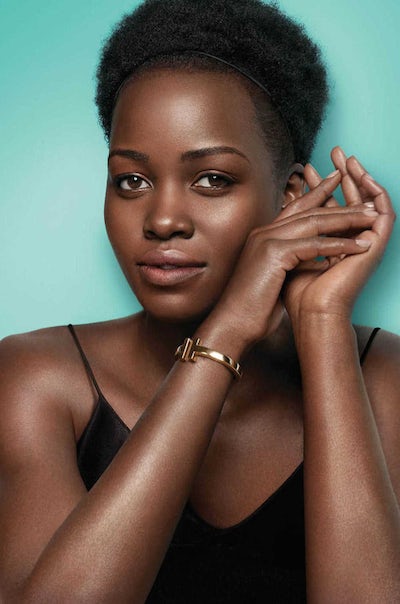 A Year With Little Sparkle

Beyond the buzz, however, are well-known economic challenges. Tiffany has cut profit forecasts and share prices have fallen. It suffered a failed joint venture with Swiss watchmaker Swatch. Annual sales have hovered at just over $4 billion since 2014, during which times Tiffany's stock has dropped more than 40 percent. In the three years since Amfitheatrof’s appointment, Tiffany has replaced nearly its entire top executive team with a luxury-heavy group: Philippe Galtié, a longtime executive at Cartier; Jennifer de Winter, a retail veteran at Saks Fifth Avenue; and Jean-Marc Bellaiche, a former senior partner at the Boston Consulting Group. Michael Kowalski, Tiffany’s chief executive officer, retired in 2015 and handed the reins to Frederic Cumenal, a straight-talking Frenchman schooled in luxury throughout his career at Louis Vuitton Moet Hennessy, where he was president and chief executive officer of Moet & Chandon.

The brand’s Asia expansion has struggled like those of just about everyone in the luxury market there, thanks to a strong dollar. More urgent is its decline in the eyes of American consumers. “I don’t think the Tiffany brand is impaired, but product reception is of the utmost importance,” said Simeon Siegel, an analyst at Instinet. “Right now, it’s a work in progress.”

Seated in a room on Tiffany’s executive floor, overlooking the bustle of Madison Square Park, Amfitheatrof wore a white and ultramarine button-down, accented by a chunky ring with three jewel-studded globes from her latest collection. Her brown hair was cropped at the shoulder. “I don’t think at Tiffany we cover ourselves with jewelry,” Amfitheatrof said in the British accent she gained at boarding school in England. “We know when to say no.” In this way, she is consistent with classic Tiffany. Even decked out in shimmering diamonds, a piece of jewelry should look effortless and light, not gaudy. Amfitheatrof brought up Jackie Kennedy, photographed crossing the street in a pair of jeans and T-shirt, a single gleaming Tiffany bracelet on her wrist.

A History in American Style

It was not until the glamorous post-World War II era that Tiffany became a cultural icon. Founded in 1837 by Charles Lewis Tiffany and his partner John B. Young, the pair grew to be one of the leading silver workshops in the world. In the late 1800s, Tiffany brought marquee gemstones to America—crown jewels from Europe and an enormous yellow diamond from the Kimberley mines in South Africa. But when Marilyn Monroe sang the company name in her 1953 jazz hit Diamond’s Are a Girl’s Best Friend, the brand entered public consciousness in a different way. The 1962 film, Breakfast at Tiffany’s, starring Audrey Hepburn as the captivating socialite Holly Golightly, made it stick. The nation’s tastemakers gravitated toward its designs, and stars such as Elizabeth Taylor, Jean Shrimpton, and Liza Minnelli flaunted its jewellery.

“Tiffany jewellery, in many ways, has come to complement the American look,” said historian Rebecca Tuite, author of Seven Sisters Style: The All-American Preppy Look. “The effortless, simple, comfortable, separates dressing that emerged in the 1930s and 1940s has come to define American fashion. And since then, whether it is the irreverent, flighty, and fun designs of Jean Schlumberger, the delicate, sculptural forms of Elsa Peretti, or the bold colourful statement pieces of Paloma Picasso, Tiffany has created some of the most iconic, complex, and yet somehow complementary accessories for America’s frequently pared-down, effortless, smart, and adaptable fashion style.”

Peretti first partnered with Tiffany in the mid-1970s and created the diamonds by the yard necklace and the whip belt. She designed sleek bone cuffs, minimalist wire bangles, and pendants shaped like beans. Her most famous one is the open-heart necklace, a simple, sterling silver pendant 11-millimetres wide, dangling from a delicate chain that has become a staple for graduating high school seniors.

It is a luxury to have a storied heritage to build on, yet another thing to create fresh hits. Luxury jewellery brands crave newness because they're trying to draw in first-time shoppers, younger women who have not spent their years among aristocrats, said Jaime Cohn-Barr, an editor at fashion trend forecasting firm WGSN. “The idea of minimalist jewellery is still huge,” she says, pointing to architectural influences weaving their way into jewellery. “That industrial look is prominent.”

Amfitheatrof is no exception. Many of the designs in “Out of Retirement” mirror that look: cubed cufflinks, thick rings, and wooden bangles all echo Tiffany's past, if in a toned-down fashion. Melvyn Kirtley, Tiffany’s head gemologist, cites another strength. “She uses the coloured gemstones like a palette in painting,” said Kirtley. “There’s gradations in colour. It gives this three-dimensionality that is unique to her designs.” This also happens to be an on-trend way for Amfitheatrof to play with expectations.

For this year’s Blue Book, the jeweller’s codex of high fashion, she matched tanzanites, aquamarines, and green tourmalines to create a rippling seascape on a platinum necklace. Included is a wide selection of ultra-extravagant, one-of-a-kind pieces that can run to $5 million or more; this year’s centrepiece is a platinum necklace fitted with a 40.22-carat, flawless, emerald-cut diamond.

The smaller, keener-focused Masterpieces collection, on the other hand, is more within reach for standard luxury shoppers. Each set follows a tightly held theme and rethinks the old designs in fresh, more wearable ways. Half the designs will look familiar to Tiffany fans, with strands of jewels that looks soft to the touch. Amfitheatrof lit up when she talked about one, the Ribbons Necklace—three lines of diamonds, each intertwined with the others, as if made of silk. “I feel like when I designed this necklace, I really felt like we had arrived at the ultimate Tiffany piece,” she said.

A Mass of Colour

The other half of the collection is bright and poppy, a ferocious colour injection that shoppers have not seen from Tiffany. Rather than the diamond-lined styles of the past, the new Tiffany Prism collection is a set of audacious spheres bursting with coloured gemstones and inspired by Louis Comfort Tiffany’s stained glass work. One ring sports three prisms like a trio of distinct planets fused with one another. Compare that to some of the collections Tiffany came out with in 2012: a set of rose-colored metallics dubbed Rubedo or a line called Sparklers that set single-coloured gems on rings, chains, and earrings. None had colours play together like this.

Nothing is off limits, Amfitheatrof insisted. There are always things she wants to add and always things she wants to edit out. Rumors that she was going to alter Tiffany’s blue box swirled after, she said, Vogue misinterpreted her. Fans scoffed at the blasphemy. “Our blue box is iconic,” Amfitheatrof said. “There’s so much to do in the brand, I think that’s the least of my important things to deal with. It’s really not on my list at all.”

On Amfitheatrof’s first day at Tiffany, back in 2013, that it became obvious change was afoot. She walked in with her sketchbook already filled with the designs that would be called the T Collection. “I design big,” she said.