Carly Cushnie Plans for Her Brand’s Future Without Ochs

Following the departure of brand co-founder Michelle Ochs, the designer is rebranding her 10-year-old label as Cushnie, introducing a new denim line and bolstering her bag offering.

Carly Cushnie Plans for Her Brand’s Future Without Ochs

Following the departure of brand co-founder Michelle Ochs, the designer is rebranding her 10-year-old label as Cushnie, introducing a new denim line and bolstering her bag offering.

NEW YORK, United States — Carly Cushnie is striking out on her own.

For 10 years Cushnie et Ochs’ clean and sophisticated take on femininity garnered a loyal following, counting Michelle Obama, Beyoncé, Cynthia Nixon and Gwyneth Paltrow as fans. But following the the departure of co-founder Michelle Ochs and chief executive Peter Arnold earlier this year, change is afoot — and Cushnie is in the driving seat, taking the creative and business helm as sole creative director and CEO.

Now, the label is rebranding simply as Cushnie.

The brand’s upcoming Spring 2019 show during New York Fashion Week this September will be Cushnie’s solo runway debut. To mark the occasion, she’s partnered with Lee Body Optix on a five-piece denim capsule that will be shown with the rest of her collection, but will be available for purchase almost immediately in October. 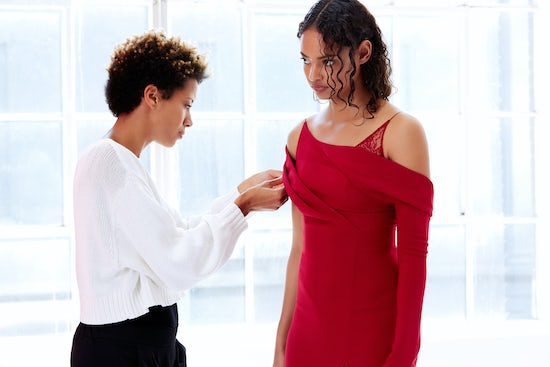 For Spring 2019, Cushnie has enlisted Kate Young, a longtime brand collaborator, to style the show. The designer describes her upcoming collection as an ode to her heritage: “I’m of Jamaican descent. I was born and raised in London. I went to school in Paris and New York; and I’ve spent the last 15 years living in New York now. So it’s really infusing this sort of vibrancy into the collection.” Fans can expect a lot of embellishments and new fabrics, she said.

While creative directors at other luxury brands — including Burberry, Alexander Wang and, most recently, Rag & Bone — have struggled to fuse creative and business duties in a dual-role appointment, Cushnie is confident that she’s well equipped for the challenge.

“Nobody knows my business better than I do,” she said. “Before the investment and before Peter joined, I was technically in this role without the title so to speak. Even though it seems very new to the public that I’m both roles, it’s not entirely new for me.”

Nobody knows my business better than I do. Even though it seems very new to the public that I’m both roles, it’s not entirely new for me.

Today the brand has over 100 stockists around the world. Cushnie declined to share figures for the business, but noted that sales from the brand’s e-commerce site, which launched in 2016, have more than doubled this year compared with last.

Bergdorf Goodman was the brand’s first retail partner, and has remained a stockist ever since. “Ultimately, the customer votes, and our clients have consistently desired what Cushnie has to offer, hence the longevity of the relationship,” said Linda Fargo, senior vice president at the luxury department store.

“She has also wisely been one of the few designers who is open to listening to feedback from the retailers and clients,” Fargo continued. “I think that openness has helped fill out and drive her business.”

Looking forward, Cushnie is determined to use her position as creative director and chief executive of her own company to inspire the next generation of female designers. First step: a partnership with Maybelline New York and The Lower East Side Girls Club, a charity that provides various programmes across arts, sciences, leadership, entrepreneurship for underprivileged girls in the area. The designer said the project would kick off during fashion week.

“Ever since I was young I wanted to be a fashion designer, but there weren’t really many or any role models I could really aspire to in the space,” she said. “That’s why it was important for me to partner with the Lower East Side Girls Club, because there are so few women like me who have the opportunity to be able to give back, and to be an example, as a woman of colour.”