A styling team for the past 15 years Charlotte Stockdale and Katie Lyall are now joining forces on a collection of luxury tech accessories. Here, they tell Tim Blanks about cold-calling Lesage, behaving badly with Karl Lagerfeld and the launch of their new line.

LONDON, United Kingdom — Here’s a title for you: The Posh Bird and the Cockney. Sounds like a fairytale from the Swinging Sixties, but it’s actually the foundation of Charlotte Stockdale and Katie Lyall’s friendship. One’s the daughter of a baronet, raised in the family seat in Hampshire. The other’s an East Ender who dropped out of school at 17 after choosing to go on holiday rather than sitting her finals.

Lyall's prodigious mother, an accomplished seamstress-tailor-bookbinder-baker, despaired and told her she’d be kicked out of the house if she didn’t get a job. Through a friend of a friend of an assistant, she ended up interning on a shoot that Stockdale, then working for Vogue, was styling. A career in fashion was the farthest thing from her mind but it sure beat work experience at an engineering firm (her other option). And she caught Stockdale’s eye, with her intuitiveness, her down-to-earth-ness, so much so that when Stockdale was looking for a new recruit for her own fledgling styling and consulting business, she thought: “What about her?”

That was fifteen years ago. And now Stockdale and Lyall are about to create Chaos together. It’s a collection of “luxury tech and lifestyle accessories” (their words) that distills years of work experience — styling stories out of other people’s ideas, endless conversations on longhaul flights — into a tight, visually grabby package that mixes functionality, the duo’s sense of humour and their appreciation of the finer things in life.

“We want to show you can do things with humour and personality that still feel like a luxury product,” says Lyall. So iPhone cases are made from leather-lined deerskin, worked to completely cover corners, which took months to perfect. (Prices start at £140.) Luggage tags are also made from deerskin, luggage belts are in printed leather. The “humour and personality” comes through in the colour palette and the poppy graphics. The apogee is an iPhone case embellished with a capsule, a very loaded visual. “Could be hay fever, could be happy times,” Stockdale offers by way of cryptic explanation. 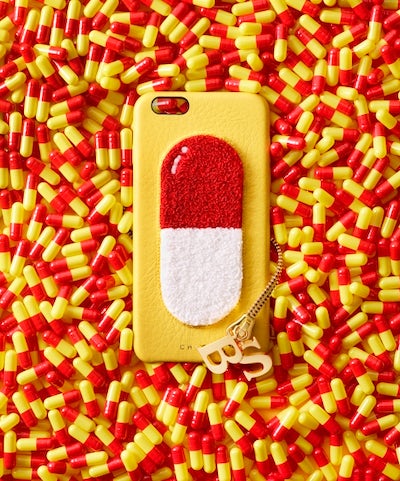 A Chaos iPhone case embellished with a capsule | Source: Courtesy

If this first collection seems very focused on functional objects, that’s because, says Stockdale, it gives her pleasure to give something as ordinary as a luggage belt a little creative flair. “We want to give people what we want.” It’s another wrinkle in the appetite for customisation that has insinuated itself into fashion. “It comes from all the tweaking we do as stylists,” says Lyall.

Chaos includes gold-plated charms for phones and deerskin initials for bags, useful little bagatelles for people looking for new ways to say “This is who I am.” There is also an initialisation service. (They do it in China.) Lyall insists customised products can be delivered anywhere in the world within five days.

As for who their clients might be? Stockdale and Lyall are so thoroughly embedded in the fashion industry through their years of styling work that you could could basically stick a pin in any page in any fashion magazine and hit someone who’s hungry for Chaos. Or check out the Chaos video, debuting on Vogue Runway on Monday, “Karlie, Lexi, Binx, Taylor, all our gorgeous girls and friends” marshalled under the lens of video wunderkind Yvan Fabing. They’ve all placed pre-orders.

Stockdale has always loved the word “chaos”. That’s why she named her original consulting business Chaos Fashion. The attraction kind of runs in the family. Her husband is Marc Newson, who has re-configured function’s relationship with form in the modern world with his own union of classicism and iconoclasm. For Stockdale, chaos meant the freedom to be as creative as possible. “No such thing as no.”

Her relationship with Lyall developed on the same principle. Origins notwithstanding, with them it was never a case of opposites attracting. They were peas in a pod from the outset. One of Stockdale’s styling gigs when they met was creative director of the wardrobe for Victoria’s Secret. The first time Lyall assisted her at VS in 2002, she knew it was Kismet. “One show, we wanted to do safari animals,” Stockdale remembers. “Karolina Kurkova was a giraffe. We thought it would be amazing if there was embroidery so we cold-called Lesage. They said yes. ‘Oh, and could you please be kind on prices?’ They were! It was just playtime, working together with no rules.”

Lyall’s evolution from assistant to other half embraced the personal — she was at Stockdale’s side during her pregnancies, and family tragedies – and the professional, when Stockdale became fashion director, first, for ID Magazine in 2011 (“Our first significant post at a magazine,” she says), then at Dasha Zhukova’s bi-annual Garage two years later. That’s where they achieved total symbiosis, combining their personal Instagrams as one voice of Chaos.

“I’d always felt inferior that I didn’t go to fashion school,” says Stockdale, “but Katie opened my mind to not being locked into styling for the rest of my life. I wouldn’t say I was a designer, or that Katie was a designer, but we love to create…” Lyall finishes the sentence, “…and we love the things we want to create.”

That passion makes them ideal foils for Karl Lagerfeld. For the last eight years, they’ve been styling fixtures at Fendi, working on design, concept and everything show-related with Lagerfeld and fellow creative director Silvia Venturini Fendi. It’s easy to imagine him relishing their tireless energy. “I enjoy being badly behaved with him,” says Lyall. The mind quietly boggles.

“We made no one’s life easy, everyone else was dragged along in our wake,” Stockdale reflects. “We thrived on ‘not easy’, and I can’t imagine we’re ever going to give up that momentum.” It’s that faith in each other which has powered them through the difficulties attached to setting up Chaos. Imagine making it up as you go along colliding with projections and spreadsheets and you’ll get the picture. “We take turns in the ‘no fear’,” says Lyall. “Charlotte is anything’s possible. I bring the making it possible.” Adds Stockdale, “We hold each other up at different times, through different talents and emotional abilities.”

We love to create... And we love the things we want to create.

Chaos is launching with a partnership with MatchesFashion.com. There’ll be a pop-up later in November in Selfridges’ new accessories hall and a Christmas surprise at Dover Street Market. But they want to be direct-to-consumer as much as possible through their own website (www.chaos.club) so they can deliver when they like. So far, Stockdale and Lyall have been self-funded, but now they’re looking for investment in order to scale up so they can produce enough stock to grow the product line.

Tech accessories are the foundation (Stockdale and Lyall want you to picture the kind of portable charger you’d be happy to leave on the table in a restaurant – and that’s just the early days of a full desk collection) but also limited editions, like the blue silk “evening track suits” they made for Cara Delevingne and Margot Robbie during the Suicide Squad promo tour. Kendall Jenner’s wearing one in pink for her 21st.

Speaking of birthdays, there’s a 15-year age difference between Stockdale and Lyall, but there isn’t a single moment in a conversation with them where you feel an almost-generation gap, or even anything big-sisterly. They insist they’ve only ever had one argument: 1am, in a morning sometime in the year 2010, after a lot of champagne. It was over by 1.45. “It was a critical adjustment in our friendship,” says Stockdale. “Super-honest. I realised that Katie’s wellbeing and future really matter to me, and mine to her. And the protection and love we’ve built for each other is more important than The Game.”

That feels like an appropriately talismanic attitude with which to be launching a business called Chaos. And it's so convincing that right now, at 22.18, I’m inspired to call all my friends to tell them I love them too.