Set to present his third CG by Chris Gelinas collection at New York Fashion Week, the Canadian-born, New York-based designer speaks to BoF on how he’s balancing early critical success with the challenges of running a fashion start-up.

NEW YORK, United States — New York City’s Garment Center, the Manhattan neighbourhood known for its dense concentration of fashion and apparel businesses, is populated with crowded mid-rise buildings that house all sorts of operations, from zipper showrooms to specialty pleaters. Designer studios are stationed there too, some occupying two, three, four floors of a building.

Those starting out inevitably require less square footage, yet it’s still a surprise to find critically acclaimed newcomer Chris Gelinas hidden in a cubby hole in the back of a sewing room run by In Style USA, a factory — unaffiliated with the magazine — that offers everything from pattern making to production. (In Style USA was one of the first recipients of New York City’s Fashion Manufacturing Initiative grants.) Walk through a door marked “CG” and you will find rows of sewing machines and tables big enough to lay out large swaths of fabric. A group of men huddled for a meeting direct you toward yet another door, where Gelinas, 29, shares an orderly, if small, space with sales director Stephanie Siu-Wai Kirtley, whom he met while apprenticing at Balenciaga. Gelinas, who will show his third collection during the upcoming New York shows, isn’t afraid to openly pinch pennies. “It’s been the best use of our resources,” says the designer, who has allocated a modicum of his budget to charming mini-sized water bottles for guests. “But it’s definitely not glamourous.”

He could most certainly do it another way. After his Spring 2014 debut, Gelinas won the Made for Peroni Young Designer Award, which included a prize of $40,000 and a slot at Made Fashion Week to present his Fall 2014 collection. Soon after, he was nominated for the LVMH Fashion Prize and, out of 30 semi-finalists, made it to the top 11. Yet, rather than chasing growth by quickly opening as many wholesale accounts as possible, Gelinas has chosen, instead, to focus on building his personal client list, which includes fashion editors, other tastemakers and, yes, even buyers, who are interested in his strain of sporty ready-to-wear. Gelinas is particularly interested in technical fabric and already develops 50 percent of the material he uses in-house. A particular point of pride is a spacer fabric, which he developed in Germany and then fashioned into a curved-hem gown for Fall 2014. The fabric offers the sculpted look of neoprene, but is lighter weight and drapes more easily. “I think there are already enough fast things out there,” Gelinas says of his steady approach. 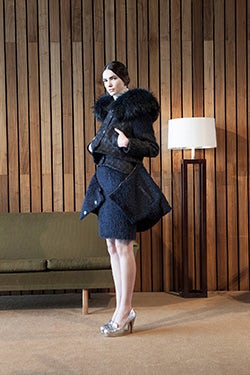 “What’s amazing about working with Chris is that he not only has an amazing artistic vision that I believe in, but he’s also got an amazing business mind,” said Siu-Wai Kirtley, who spent six years at Balenciaga in an operations role that required her to float between sales, merchandising and design. “He’s very organised, he has clear ideas of what he wants, he won’t just throw money at things. That’s really refreshing."

Gelinas was raised in a small town outside of Windsor, Ontario — Canada’s southernmost city — where there was “no semblance of fashion.” The young Gelinas was captivated by what he read in magazines, however. And while studying business at the University of Windsor, he secured an internship in the production department at Marc Jacobs after sending the company a blind email. After a short stint in the PR department, Robert Duffy offered him a permanent job in sales, even before Gelinas had finished his degree. “Two days after I graduated, I moved to New York,” he recalls. His spent three years in the sales department as an assistant buyer, “which was great because it was taking my business degree and applying it to the retail world of fashion.” But the longer he worked in fashion, the more he wanted to design and, in 2009, Gelinas left Marc Jacobs to get an associate’s degree from Parsons, which he earned in three semesters, while simultaneously interning in the design studio at Proenza Schouler.

After graduation, Gelinas secured a six-month apprenticeship at Balenciaga under Natacha Ramsay-Levi, then the head designer in the pre-collections studio. “It was by far the most intense experience I had working in a design studio, just because the expectation is so high,” he says. “The level at which they design and develop was, I think, the highest when Nicolas [Ghesquière] was there. It really took the foundation of what I learned at Parsons but completely turned it upside down and showed me a new way of designing and developing. I think there are a few different approaches of how you get from the concept to the end product. There, it’s really driven on understanding the materials you were working with and researching volumes and drapes. Seeing each member of the team hop on the machine and do a little technique was really amazing because, here, you have the impression of a designer just sitting in a room, sketching and passing it off. There, the materials come before a sketch.”

After Balenciaga, Gelinas accepted a position at Theory under Olivier Theyskens, whom he met in Paris. Three years in, he handed in his notice to begin working on CG. “Having this brand is something I’ve been thinking about for a long time,” he says. “At first, it was a daydream. But the more experience I got and the more I understood my design aesthetic and point of view, it became a less of a daydream.” Theory CEO Andrew Rosen and Theyskens were both supportive of the move. And when Gelinas started looking for studio space, Rosen recommended him to Jim Mallon, who owns In Style USA. “Andrew has been a mentor to me in this whole process,” he says. “He’s really my barometer.”

Thus far, CG — rooted in American sportswear but with a focus on construction, finishing and innovative textiles — has been completely self-funded. “But funding comes in so many ways,” muses Gelinas. “My very first space was a factory’s fabric storage room that they cleared out so that I was rent-free for three months. That’s a good amount of money in your pocket,” he says. “It’s pattern makers who I’ve known since Marc Jacobs who are coming in at six, seven o’clock at night and on the weekends after their day jobs. It’s sewers who refuse to cash my checks, because they know that I’m just starting out and struggling. There’s a lot of help and support along the way.”

The designer’s first presentation — which featured sporty separates in techno fabrics, such as a neoprene skirt overlaid with organza — was pulled together in five days for under $2,000. That collection not only won him the Peroni Young Designer Award, but it also attracted an influential fan base. “I love the way he can make each individual piece look important,” says fashion consultant Julie Gilhart, who has become a mentor to Gelinas. “There are no basics and yet I’m loving that. New York is so focused on street and contemporary fashion that it’s refreshing to see talents like Chris break out.”

While Gelinas attracted interest from wholesale buyers in his very first season, he decided to keep a lower profile and focus on private clients until the right retailers came calling. But the LVMH Prize has put him on the global map anyway. “We didn’t get the top prize, but we got so much out of it,” he says. “Meeting the top buyers — Natalie Massenet, Adrian Joffe, Marigay McKee — it’s amazing to have them look at your collection directly when [normally] it would take years for that person to eventually be in your showroom.”

Now, with the support of Siu-Wai Kirtley, who joined the start-up in November 2013, Gelinas is poised to enter wholesale and, this season, the team will travel to Paris for market week to meet with international buyers who don’t attend the New York shows. The designer declined to reveal current revenue figures, but plans to continue to develop the business at a slow and steady pace.

“What I took away from Balenciaga was the level of brand control,” he says. “It’s something Stephanie and I are really focusing on from the onset. We don’t aspire to some rapid upward trajectory.”