LOS ANGELES, United States — When the cast of Saturday Night Live flies you across the country to have you design a pair of shoes, you must be doing something right. The specially designed shoes were featured in the finale of the legendary American sketch comedy show's 34th season.

The Creative Recreation story began in 2005 when Robert Nand and Richard Cofinco set up Creative Recreation in a small office in Orange County, California, benefiting from their shared experience as shoe designers at Vans. Their aim was to go beyond the traditional separation of men's athletic and dress shoes to focus on the intersection of the two, thereby creating a brand new market segment which has subsequently been targeted by high-end fashion brands including Lanvin, Jil Sander and Pierre Hardy.

Nand and Cofinco developed a series of four standard shoe silhouettes which serve as canvases that can be embraced by distinctive colour palettes and carefully selected materials ranging from leathers, suedes and artificial snakeskins. Over the years, they have developed 23 different shoe patterns, releasing about 200 different styles per season in limited runs, offering something more like a collector's piece than a mass-consumed athletic shoe. Indeed, many fans of the brand, including young creatives and hip hop stars alike, collect the shoes religiously.

Fans of Creative Recreation also love the aesthetic versatility of the stylish sneakers. A pair of high-top Di Cocco's in black patent leather can be worn with a tailored suit or with a pair of shorts and a tshirt, with equal panache. And, the shoes are instantly identifiable—not because of an obvious logo—but because their standout design aesthetic is a signature in and of itself.

The market has responded with enthusiasm. In a time when designers are having to compromise and brand's sales are shrinking, the team at Creative Recreation is doing quite the opposite. in 2006, Barneys New York approached the brand to do a limited release shoe to be sold exclusively at their New York stores, becoming a highly coveted release for Creative Recreation aficionados, season after season. 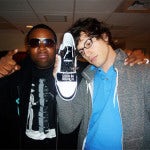 So how did they do it all? The company has grown from a team of about five to 60 in the last three years, in large part due to a formula that can be described as organic and opportunistic. Since the very beginning, the company has attracted a team of dedicated and talented individuals who live, breathe and promote the brand. One such person is Jai Beck, who joined Creative Recreation in 2006 as an active investor, taking on the role of Head of Production. Thus, Creative Recreation inadvertently solved their largest challenge: by joining forces with Beck, whose expertise is in overseas production, they have managed to maintain healthy margins while doing only small runs.

Looking forward to Spring 2010, Creative Recreation is plotting a global product launch for its new Select line, targeting a more mature and loyal clientele who aren't quite ready to give up the comforts of a high-top sneaker, but are no longer drawn to flashy pink patents or evocative leopard prints.

Perhaps the most interesting lesson that can be learned from the brand is the idea of affordable exclusivity. By keeping both their prices and production runs low, Creative Recreation's consumers can continue to buy exclusive shoes at a price that won't break the bank. This means, that die hard fans can rock their favourite sneakers with the confidence that no one will be cramping their style.

Khaleed Juma is the Managing Editor of The Business of Fashion.