The fashion industry was out in force — online, offline and worldwide — to participate in Saturday’s Women’s March.

The fashion industry was out in force — online, offline and worldwide — to participate in Saturday’s Women’s March.

WASHINGTON DC, United States — At a rest stop off the highway in Delaware on Saturday morning, fashion consultant Julie Gilhart stood on a chair hoping to make herself visible to her travel companions. Clusters of women, and a notable number of men, many from New York City, had stopped briefly on their way to the Women’s March in Washington, DC, a protest that drew more than 500,000 people to rally for women's rights and against the public policies and private behaviour of the newly inaugurated US President Donald J. Trump.

Some in the crowd recognised Gilhart. “Julie!” cried April Uchitel, the chief brand officer of shopping platform Spring, joyfully surprised to see her fashion comrade. Nearby, in line for Starbucks, was the designer Ulla Johnson and her son, who had run into Hatch Collection’s Ariane Goldman and march buddy Nadine Abramcyk, the owner of the popular nail salon and nail care line Tenoverten.

As the day progressed, there were plenty more serendipitous encounters between fashion professionals, both in Washington, DC — where designers including Clare Vivier, Maryam Nassir Zadeh, Brother Vellies’ Aurora James and Rachel Comey marched — and at events around the world. In London, industry insiders took to the streets in force, marching from the American Embassy to Trafalgar Square, while in Paris those assembled for the city's men's fashion week took time away from their busy schedules to rally. 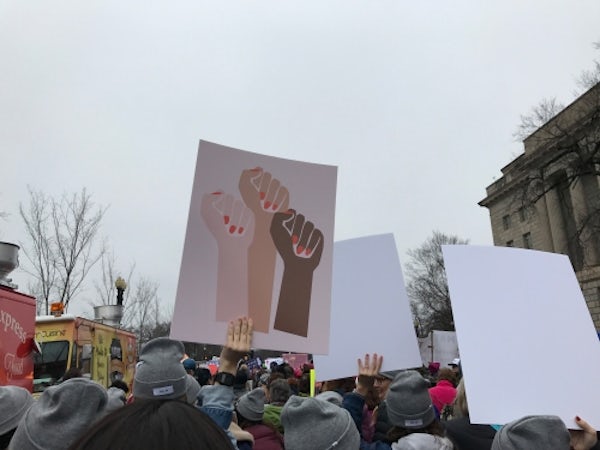 March organisers estimate that 4.7 million people participated in 673 marches worldwide, from Washington to Antarctica. More than 400,000 turned out in New York — including designers Tanya Taylor, Zac Posen and Adam Selman — while 750,000 took to the streets in Los Angeles, including designers Rosetta Getty, Jasmin Shokrian, and Co’s Stephanie Danan, among others.

For business, women's rights are directly linked to performance. For one, women drive 70 to 80 percent of all consumer purchasing in the US, according to EY, a professional services firm. Meanwhile, closing the employment and wage gaps between women and men would add $17 trillion to the global economy, says the United Nations.

As supply chains and labour become more transparent, so must a company's stance.

“There are so many studies showing that when women are better represented in all parts of the economy — especially at the top levels, whether it’s corporate boards or running companies, starting small business, running large businesses — the entire country's economy benefits,” Glamour editor-in-chief Cindi Leive told BoF, highlighting just one of the issues at stake, just hours after the march, which she attended in Washington. “Not to mention in certain parts of the world you see less poverty, less terrorism.”

The power of the Women's March in response to yesterday's inauguration has also forced many fashion brands, typically politically neutral, to reconsider their official allegiances and communications policies.

On Friday, Ralph Lauren attracted attention by dressing both Melania Trump and Hillary Clinton for the inauguration in what some industry observers saw as a shrewd and carefully balanced publicity move. Of course, New York rivals Oscar de la Renta and Carolina Herrera, which both dressed Ivanka Trump for inauguration proceedings, have long outfitted members of the First Family regardless of which party was in power. (The First Daughter also happens to be a longtime client of both houses.)

But some suggested that, in today's more transparent, direct-to-consumer world, where consumers seek out brands which align with their personal values, fashion labels would increasingly be forced to take a position on key political and social issues. “As supply chains and labour become more transparent, so must a company's stance. The customer will pay more attention to a brand if their stance on issues is similar. In today's climate, we can really begin to vote with our purchases,” said Gilhart via email. “It's harder for larger companies, as risk management is factored in, but as Gloria Steinem says, 'The future depends entirely on what each of us does every day; a movement is only people moving.'

“So, this is why I march,” Gilhart continued. “To be a part of a movement that aligns with my values of what needs to be kept sacred and what needs to change. I, like many others, am not going to stand still in regards to human rights and environmental issues."

"Consumers don't want to be lied to, tricked, or duped," added Comey, whose partner took charge of her downtown Manhattan shop during the march so her team could attend with the designer. "It's the consumer's dollar, not the other way around, so they want respect and transparency on what they're buying."

As Comey pointed out, in one sense, the commercial impact of thousands of people taking to the streets could already be felt. "I'm not an economist," she said, "but I don't think many people were shopping yesterday."