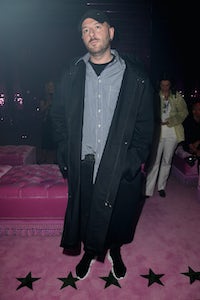 PARIS, France — Authenticity is something very personal, it’s hard to define what it means in general. I think about this now when so much of the information disseminated online has to do with numbers. Finding what appeals to the most people, most of the time. To me, authenticity can be the fabric you choose to make a parka: a military parka is authentic in a khaki washed cotton. If you do it in denim, it’s not authentic. Authenticity is about going back to the original archetype. Every garment I do is based on a garment that already exists; I don’t invent anything new. Well, apart from the legging that turned into a pump that I did recently at Balenciaga and called ‘pantashoe.’ But typically I would use the term ‘authenticity’ to describe something I can associate to something from my past experience. Take the trench: for me there is only one image in my mind when I think of that garment and it’s Meryl Streep in a movie from the Eighties, standing on the Manhattan Bridge.

In January 2017 I put on a Vetements fashion show that was all based on archetypes of dressing; that show was a revelation for me. A lot of people, or rather a lot of fashion people I talked to afterwards thought it was too simple. Not fashion enough. And that’s even though the collection included forty-five different design concepts, like a wedding dress as a jogging suit. In most collections you have one concept – like, this season the concept is ‘Greece’ and the whole collection is about Grecian goddesses. I had forty-five, and still fashionistas found it simple. They found it simple because my trench coats were beige, or because a model in jeans and a shirt reminded them of a neighbour. To me, that was the whole purpose of the show. I had to explain things afterwards. It wasn’t about normcore at all, it was highly conceptual. The trench coat was lined with a dress that you can also wear, but you have to put it on to know that. But everyone was watching the show through their phones so how could they tell what the collection was really about?

In fashion we speak of ‘DNA,’ and typically that’s been associated with a product: think of Chanel’s tweed suits for example. In fashion that is authenticity; whenever another brand makes a tweed suit, you reference Chanel. But today times are different so it’s more about an approach or a creative message than a specific product. Vetements is known for a certain kind of irony or questioning and this is something I think will stay associated with the brand. Being the mirror of culture. Some years ago I was quoted as saying, ‘It’s ugly, that’s why we like it’ and ever since people think that I’m into ugliness. But it’s a misconception; I never intended to put ugliness on a pedestal. But then again, maybe something I love because it’s old, dirty and has stains on the back, other people would find ugly. To me, it’s more about finding something beautiful in what other people discard as ugly. Anyway, who gets to decide what’s ugly and what’s beautiful?

Irony is both about making you smile or laugh, but it can also be quite painful because it asks questions. With irony you can ask questions that are delicate, but there’s a thin line between irony and sarcasm so I have to be careful not to overstep it. I made a bag for my first men’s show at Balenciaga, which was based on the classic Ikea bag. It was ironic but also authentic. I used the blue Ikea bag during my four years as a student in Antwerp, due to its size and its price. Fifty percent of all students had the same bag for the same reasons, When I did it at Balenciaga I recycled leather that the company had on stock from previous collections, and I finished it as a luxury product. I meant it as an ironic gesture in part, taking something really cheap and moving it into the luxury realm. But it’s authentic too, and that’s why it’s been all over the internet by now. People can relate.

Vetements stirs up up a lot of reactions – it’s apparently still provocative to do a ripped hoodie. I quite like that though; it gives what we do meaning. The first year and a half I was pretty much bombarded: I did interview after interview. ‘What do you want to say with what you do?’ Words like ‘disruptive,’ ‘anti’ and ‘Margiela’ kept being repeated. It was a bit hardcore. In the early days I used to prepare; what am I going to say after the show, what will my answer be if I’m asked about the casting? It never worked for me though – it just stressed me out. I can’t really act, I have to be spontaneous – however I feel on the day. That’s the way I feel the most ‘me.’ I could never be the kind of designer who prepares with one PR, then proofs the interview with another. So now I don’t prepare anymore, and as a result sometimes I read back what I’ve said in an interview and I think it sounds horrible. But I also know that it’s just a reflection of me at that particular moment. My interviews are very eclectic, and I like that.

I never really intended for Vetements to be an outsider, but I do think that the fashion system sees us as not really fitting in. Decisions we make because they are easier or cheaper, the industry seems to take as an anti-stance. But we’re not really different to anyone else; we still have showrooms, sell our clothes to buyers and work within the same parameters. We do have more freedom though – if you’re a five-year-old brand, making mistakes and acknowledging them is much easier. If you’re an established big house, taking risks is much more difficult. In fact, what would be considered a risk at Balenciaga for instance, my brother, my team and I would never even think of in those terms. For us, it would be just normal.

When it comes to a brand like Balenciaga, its identity is something I have had to think about a lot. You could say that the authentic Balenciaga would have been the company at the time of Cristóbal Balenciaga, but part of my challenge when I started at the company was to figure out what the DNA actually stands for and extract from it what I could use today in a modern way. I’m trying to figure out what is ‘authentically’ Balenciaga and how can I recreate that in a completely new way. I think it’s important to pay attention to what a brand originally stood for – otherwise you’re just profiting from its past. To me, that’s not right. Balenciaga is an old couture house, and this is something I have to respect as a new designer there. This kind of past matters, especially in Paris which is after all still the capital of this fictional fashion world. With Balenciaga I work within the established rules, with a heritage and brand values that I have to consider. When I started, I spent a season in the archives, trying to understand Cristóbal Balenciaga and who he designed for. If a new designer doesn’t do that I don’t see the point of working at an already established house – why not start something new instead then?

Both the Balenciaga and Vetements client is a very well-informed person: they know about the brands, and even when new products are coming out. It’s quite surprising and fascinating to me, how much they know and care. If I wasn’t working in fashion, I don’t think I would ever spend so much time on it. For the Vetements client, it’s all about attitude, you know, grunge and greasy hair. It’s still a bit underground. Balenciaga has a very different take on conceptual design in terms of construction, shape, volume. Wearing either brand is a social signal too – it says that you’re in the right fashion clique. In any period of fashion history, there are always a few brands that best signify the times, brands that those in the know feel they should be wearing. In the Nineties, it was Helmut Lang and Margiela, and now it’s this. You wear your Vetements or Balenciaga with Acne shoes and Céline sunglasses, and you’re it – that’s how they function in their fashion minds. It’s funny actually, since I dress both the Vetements and Balenciaga customer, my client base as ‘Demna Gvasalia’ is much bigger than either one brand. I’ve become a brand too, sort of.

To really be authentic you have to be able to recognise the products of one brand from another. It has to be unique. Identifiable. Logos are the easiest way to brand something, it’s a little lazy even. We did it a lot at Vetements at the beginning, and many of those products are still in demand so we keep producing them. I was experimenting with an almost shameless idea of branding, and it really worked. It’s a way of communicating that’s very adapted to the internet era: you can see immediately where a garment is from if it has a logo. It has a visual immediacy that’s easily instagrammable. At Balenciaga I’ve used logos almost to identify this new era for the brand; it’s like a stamp that authenticates a garment as a ‘Balenciaga by Demna Gvasalia’ piece. When I design a piece, my last thought is always, ‘Does this need a logo?’ Generally though, we do logos less and less – I’m too tired and bored of it now. I’m really into the idea of storytelling today. I know it’s an old school way to work in fashion, but since I’ve always focused on wardrobe categories, the products I make coexist but don’t necessarily interact. Working with a story would unite all the elements in a collection, and that’s unknown territory for me. I’ll work with real characters, actual people who are inspirational to me for a particular collection.

I think about the dangers of selling out every day. You can’t saturate the market. It’s so easy today to get caught in the sell-out trap, especially when a business is successful and a product is in demand. When something becomes popular, buyers want to get more of it and are willing to invest a higher budget in your brand in order to make more profit from it. But you get to the point of oversaturation too easily: you produce too many hoodies and T-shirts and soon people don’t want it anymore and it goes on sale. We’ve had to deal with this kind of situation a lot at Vetements and we’re only now beginning to understand how to strategise and manage this in the future. We’re reducing the supply: it’s a very basic market economy model. When buyers say, ‘We want to give you more money,’ you say no. But that’s the most difficult thing for a company, whether it’s new or old. No one wants to refuse money. Many brands destroy themselves because they can’t say no. Thanks goodness I’ve had four years of economic education, so I always balance up the risks. You have to believe in your own long-term strategy, even if it leads to you losing money in the short run. To resist, you need stamina.

This article has been condensed and edited for publication. It first appeared in the new issue of Vestoj ('On Authenticity') on sale now.