The campaign video immediately sparked criticism from viewers who saw the depiction of a Native American dancer as an instance of cultural appropriation.

NEW YORK, United States — Dior posted and removed a new campaign for its “Sauvage” fragrance featuring a Native American dancer within the space of a few hours on Friday, amid mounting criticism that the video was an example of cultural appropriation.

The short video features a dancer in traditional Native garb performing to a drum beat, followed by a narrator saying “We are the land. Dior.” The LVMH-owned fashion house described the campaign on social media as “an authentic journey deep into the Native American soul in a sacred, founding and secular territory” and said it had also worked with Americans For Indian Opportunity, an indigenous advocacy group.

“The ‘Sauvage’ campaign released by Dior today is offensive, racist and cultural appropriation at its worst by a corporation that is exploiting Native peoples and culture for profit,” Crystal Echohawk, Executive Director of IllumiNative, a Native American advocacy group, told BoF. “This is a company that is looking to profit off of advancing a harmful stereotype about Native people.”

In a statement, Parfums Christian Dior said the company is “very proud of this collaboration with AIO,” describing it as part of the organisation’s campaign to “change the misperceptions about Native Americans, to share accurate American history, to build awareness about Native Americans as contemporary peoples and to promote Indigenous worldviews.”

This is a company that is looking to profit off of advancing a harmful stereotype about Native people.

The Sauvage campaign, which stars Johnny Depp, is the latest example of luxury brands running afoul of consumers and advocates on matters of race and cultural appropriation. In the last year alone, Gucci, Prada and Burberry are among the brands that released items or used imagery widely seen as incorporating racist tropes. Those brands responded swiftly, removing the offensive items from stores and changing how they operate internally to avoid future mistakes.

This is not the first time Dior has been accused of cultural appropriation. A campaign for the Cruise 2019 collection, featuring garments influenced by Mexican culture, was criticised for starring Jennifer Lawrence, who is not Mexican. In April, Dior debuted its Resort 2020 collection in Marrakesh, Morocco, with opinion split between those who saw African influences on the show as another instance of appropriation, and others who saw an example of cultural borrowing done right. 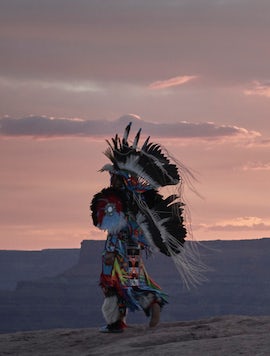 A scene from the Dior Sauvage campaign that
uses Native American culture. | Courtesy

These incidents can have financial consequences that last beyond the immediate backlash on social media. Dolce & Gabbana said earlier this week that sales in China had fallen; the brand has seen a boycott there over an offensive ad campaign and racist remarks by co-founder Stefano Gabbana.

Dior followed many of the protocols brands have put in place since those incidents, including working with representatives of the culture being portrayed in the campaign. However, the combination of the fragrance’s name and stereotypical imagery rubbed many the wrong way. So did the inclusion of Depp as the campaign’s celebrity spokesman. Depp, who is not Native American, is a controversial figure in his own right following accusations of abuse by ex-wife Amber Heard.

“Dior tried to take some of the right steps, which is working with an outside organisation to make sure they were creating a culturally sensitive ad, but what seems apparent to me is that even if you do the right things, you can lose control of your own story,” said Kerri Lyon, who works in crisis management at strategic communications firm SKDKnickerbocker. “You have to make sure you are seeking out a diverse set of feedback on an ad that is culturally sensitive. There was certainly a lot of thought that went into this but it clearly wasn't enough.”

Laura Harris, Executive Director of AIO, said in an email to BoF that the group worked with Dior in order “to ensure inclusion of paid Native staff, artists, actors, writers, to educate the production teams on Native American contemporary realities and to create allies for Indigenous peoples. AIO does not speak for all Native Americans. We are proud to have successfully achieved our goals of education and inclusion for this project with Parfums Christian Dior.”

Critics of the Dior Sauvage campaign said the use of Native American culture was tone deaf. On Twitter, the hashtag #NotYourSavage was being used by critics to voice their anger about the campaign.

“Calling us Savage in a different language and accent doesn’t remove the long-standing historical violence and racism we continue to experience!” one Twitter user wrote.

Calling us Savage in a different language and accent doesn’t remove the long-standing historical violence and racism we continue to experience.

“I find it deeply disturbing when brands force Native people to make the choice between stereotypes and misrepresentation, or utter invisibility,” tweeted Adrienne Keene, an assistant professor in American Studies and Ethnic Studies at Brown University who is a member of the Cherokee Nation and writes the popular blog Native Appropriations.

“The word ‘sauvage’ might mean wild in French but it’s a direct translation to Americans as savage and that really taps into the master narrative in this country in which Native Americans were described as savage,” she said.

Patricia Michaels, a Native American designer from Taos Pueblo, New Mexico said that she is bothered when Western fashion brands use her ancestors’ imagery for profit.

“The responsible thing for a company like Dior would be to give back to the American community, not feed off of someone else’s culture,” Michaels said.

Kristen Dorsey, an LA-based jewellery designer and member of the Chickasaw tribe, said the Dior campaign bothered her and many Native American artists like her because the company leaned on tropes and stereotypes. She said the company should have reached out to other designers and artists in the field, who would have recommended they invoke modern Native American designs and art that don’t rely on stereotypes.

“The imagery they are using for this campaign is just tired tropes of how Natives are so wild and one with nature,” Dorsey said. “It’s a classic example of the white men who come and take whatever from Native American culture that they want. That’s why it’s so offensive.”