A wave of new models from the Dominican Republic are scoring major campaigns and runway gigs at fashion week. But what — or who — is really behind their unstoppable ascent?

A wave of new models from the Dominican Republic are scoring major campaigns and runway gigs at fashion week. But what — or who — is really behind their unstoppable ascent? 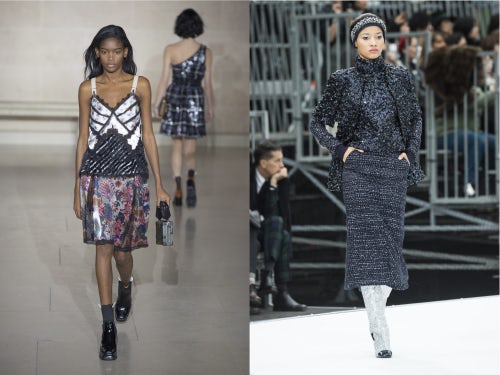 PARIS, France — Before boarding a flight to Paris where she would tear up the runways for Dior, Saint Laurent and Louis Vuitton, Manuela Sánchez posted a very important photo on her Instagram feed while working in Milan.

“Dominican power backstage,” wrote the season’s breakout star, next to a snap taken with fellow Santo Domingo-native Lineisy Montero at the Missoni show. Adding a few muscle-flexing emojis for good measure, she then thanked Montero “for opening the door to a new generation of (afro) Dominican models in the fashion industry.”

Sánchez is part of an alluring army of new models from the Dominican Republic making an invasion in all of the fashion capitals. Firm favourites during fashion week and increasingly cast for major ad campaigns, this season saw even more hail from the small Caribbean nation. Nearly 20 brands hired three or more Dominican models at the Autumn/Winter 2017 shows, including big hitters like Marc Jacobs, Burberry and Prada. So if they seemed everywhere, it is because they were.

While girls of Dominican descent are not entirely new to the high echelons of fashion — Omahyra Mota, Arlenis Sosa and Rose Cordero set some precedent — it was the success of Montero what paved the way for the newest guard.

Passionate Scouts in the Caribbean

“Lineisy marked a before and after; she opened the door to a new generation of models that are now seen in all of the international runways,” says Sandro Guzmán founder and director of Ossygeno Model Management, the mother agency of most top Dominican names, like Montero, Balmain star Ysaunny Brito, Luisana González, and Versace favourite Richie Beras, to name just a few.

Although their efforts may have only paid off recently, bringing Dominican women to the forefront of fashion is the culmination of more than 10 years hard work for Guzmán and another model agent from the Dominican Republic, Luis Menieur. 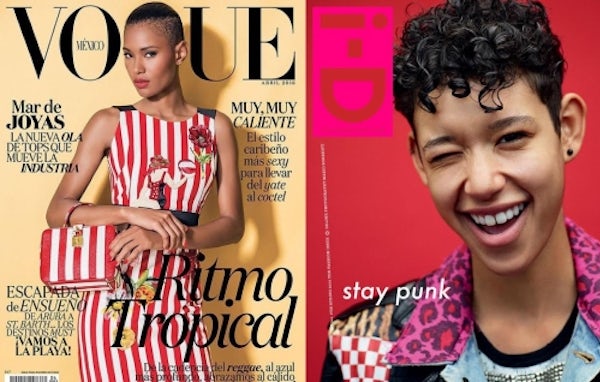 New Faces editor of Models.com, Rosie Daly says it has been greatly due to the “visionary and directorial scouting” of these two men. Menieur was behind Arlenis Sosa's success and scouted Sánchez as well as rising stars like Genesis Vallejo and Liany Gómez. “They’ve given the fashion industry what it wanted before we even knew that we wanted it," she adds.

“Many go off straight to do exclusives, like Lineisy with Prada or Luisana González with Louis Vuitton, but they were ‘made’ in Domincan Republic," says Guzmán.

Both Montero and González landed contracts with Next and Ford, respectively, right out of the Ossygeno Models Contest (formerly the Elite Model Look for which Guzmán has held the local franchise since 2006). The event also served as a springboard for Kenzo campaign star Amelia Rami, Mulberry’s Chanel de León and many others. “Now international agencies are constantly in touch awaiting the next great discovery,” says Guzmán.

A few noteworthy male models have also taken the industry by storm. Most, if not all, have walked for Givenchy, including Ossygeno’s Oscar Lasarte and Keudy Pérez and Menieur’s Keith Hernández, Rafael Pérez and Francisco Peralta. The latter also starred in a campaign for the French house, as well as Armani.

The Dominican Republic has been hailed ‘the new Brazil’ thanks to its growing reputation as a wellspring for beautiful models. But given that the Spanish-speaking nation only shares a small island in the Caribbean with Haiti, it is on an entirely different scale. With just 10 million people, it has only a tiny fraction of the Amazonian country’s 202 million population.

Brazil’s network of agencies and its established fashion industry gives casting agents a much greater pool of potential beauties to draw from, but it has not always surfaced models as diverse as its multi-ethnic society. Many successful international faces from Brazil have been of light-skinned European ancestry.

Like most of Latin America, the Dominican Republic is made up of a diverse racial mix. The difference, however, is in the genetic cocktail of the country. More than 70 percent of the population is mixed race – mainly with African, indigenous Taíno from Hispaniola and European roots.

“What makes the Dominican Republic very appealing is the ethnic mix of people; you can get a great spectrum of girls and even boys,” says casting director James Scully.

Models.com's Daly sees the Dominican Republic as a “wildcard”. “There's no predicting the type of beauty that will come out next, which is exciting,” she says. But it is [the models'] versatility that is as important as the "vibrancy and energy” they bring to a shoot or show. “Dominican girls can embody both the classic beauty of black women and va-va-voom qualities of Latinas and so much more, they can be quirky or hard-edged or very soft, intellectual, androgynous, ultra feminine,” she adds.

The new editor of Vogue Mexico and Latin America, Karla Martinez, agrees: “These girls have a more citizen-of-the-world look; they could be from the Dominican Republic, but they could also be French or American.” 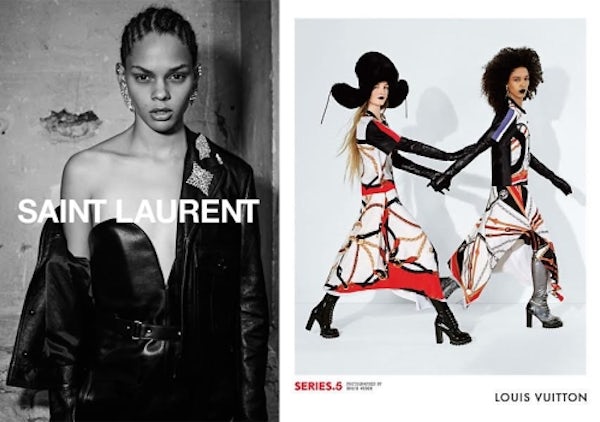 And with the United States being home to almost one million Dominicans, it is no surprise America has spawned talents like Long Island-raised Dilone, who has fronted campaigns for Stella McCartney, Versace and Balmain, and Dominican-American twins Jan Carlos Díaz and Hector Díaz who have worked for Valentino and Zara.

“Hispanic women have been underrepresented in fashion for quite some time; it’s refreshing to see the evolution of a culture in an image that has always deserved to be featured prominently,” says Kyle Hagler, president of Next Models New York.

“Today, if people don’t see themselves represented they will go and find it somewhere else; you don’t have to see [models] in a fashion magazine anymore,” adds Scully. “That’s making their presence a lot more appealing to clients and potentially to people who hire them for a show or advertisement.”

Guzmán notes that young Dominican girls — who “at 12 years of age are gifted a hair straightener” — now look up to models like Montero. They are more vocal about celebrating their ethnic traits and embracing their natural curls, he says.

Carlos Lamarche, journalist and contributor for CNN en Español, agrees that beauty perceptions are slowly changing, but argues that the Caribbean nation still faces strong racial prejudices. “Even after all of Arlenis Sosa’s international success, she’s never done a campaign in the Dominican Republic,” he adds.

Scully remembers a time when he could count on one hand the number of times a black model opened a major menswear show. “[But] now seven, eight, nine shows open with black models. That's a big deal and we've come a long way in that sense [and] the whole boom of Dominican models just reinforces that fact."

The current fashion climate, besides pointing to a wider representation of racial diversity, is becoming a celebration of individuality in a much broader sense and Dominican models are a good example of that. Scully argues that the relevance of social media and the emergence of brands like Hood by Air and Vetements with a certain sub-culture aesthetic have led to the search for more “individual” casting.

Ivan Bart, president of IMG, which represents Dominican talents like Gucci favourite Elibeidy Danis and Jillian Mercado, a disabled Dominican-American model with muscular dystrophy, believes this is the way forward.

“As much as it’s now about the Dominican Republic models it's about so many others [who] are having great moments in great places in different backgrounds, in different sizes, different stories and we'll just keep pushing all the conversations," says Bart, who recently signed hijab-wearing Somali-American model Halima Aden.

Clearly, the rise of the Dominicans connects with the broader conversation on diversity currently taking place in fashion. But for many insiders, it goes beyond physicality altogether. “Today [a model’s look] is appreciated with a more intelligent view, where other values, qualities and personalities are taken into account,” says Pamela Ocampo, editor-in-chief of L'Officiel Mexico.

Having an attitude "you can fall in love with" is an important trait many Dominican models have, according to Jose Duran, director of Viva Models Barcelona, who represents Manuela Sánchez. “It’s key to getting your foot in the industry and staying there,” he says.

Luisana González, also thinks their personality and presence is key. "I think that's what makes us stand out," she says. But according to Ysaunny, there is something even more important. "We're always in a good mood and prepared to work," she adds. 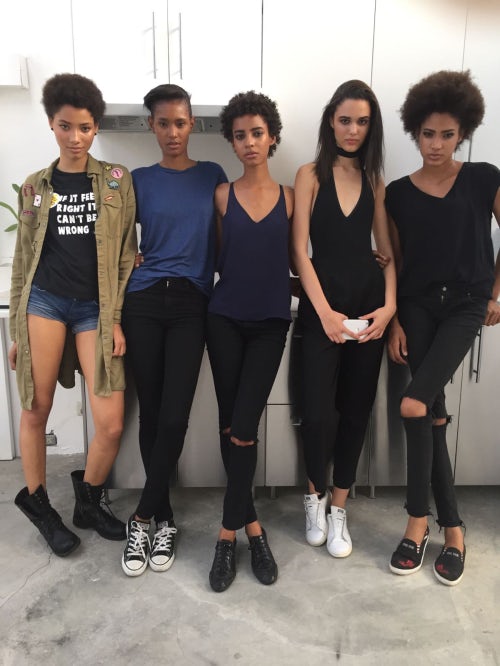 Indeed, like the wave of Russians before them, most of the Dominicans in this wave have become known for their strong work ethic. For many who find success, it is a rags to riches story, as many come from very humble backgrounds. According to an undisclosed casting industry source familiar with fees, some of the Dominicans now command a day rate in the tens of thousands of dollars.

“Now [Dominican] families dream their lives will change if their girl finds success with a modelling career,” says CNN’s Lamarche, who is producing a documentary on the personal stories of the country’s top models, which is expected to be released later this year.

Next Models' Saint Laurent star Hiandra Martinez is aware of the responsibilities that come with being a role model. She takes pride in the fact that she and others have helped put the Dominican Republic on the map. "It’s a great motivation for young people who want to excel," she says.

The Dominican model moment also represents a wider Latin American movement which, aside from Brazil, includes Argentinians, Puerto-Ricans and Mexican models, according to Ocampo. “I think it's not only Dominicans, it's Latin American women in general," she says. Clearly, with other nationalities showing up in recent seasons like Argentinian Mica Argañaraz or Mexican faces like Issa Lish and Mariana Zaragoza, some believe the Dominican boom could help open the door to more talent from the region.

"Designers [in the region and] in general are more open-minded about beauty and [aware] that women of various backgrounds are buying their products,” Martinez adds, crediting Instagram with some of the progress.

The Vogue Mexico and Latin America editor-in-chief adds that last year her magazine received a great response to Joan Smalls and Mariana Zaragoza's cover and that Ysaunny Brito's April cover was one of the most successful of the year.

Undoubtedly, the rise of Dominican models provides a hopeful outlook for more inclusive show casting, although Hagler argues that there’s still room for improvement. "The presence of Dominican women in fashion indicates the industry is realising the importance of diverse cultural balance in imagery, but we have a lot more work to do in making the playing field fair amongst all races and cultures," he says.

Kate Moss Inc: How the World-Famous Supermodel Is Building a Business of Her Own