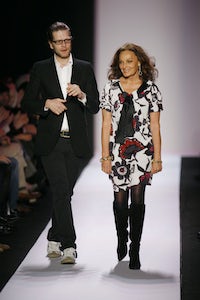 NEW YORK, United States — DVF is moving fast in the lead-up to a potential sale.

The company has announced Nathan Jenden as its new chief design officer and vice president, creative, following designer Jonathan Saunders’ resignation in December 2017. Jenden is a DVF veteran, returning to the brand where he worked for 10 years until 2011.

“Nathan is an extremely talented and technically skilful designer who also has a great gift at surrounding himself with young, emerging talent,” said founder Diane von Furstenberg in a statement. “It is with joy and pride that I look forward to welcoming Nathan back at DVF.”

“I want to make great clothes that resonate with women,” Jenden said. “I see DVF as being more relevant today than it ever was in its message of self-empowerment while being dynamic and modern. I want to give the DVF girl what she wants, when she wants it, and with the joie de vivre and sense of purpose that epitomises Diane, DVF the brand and the spirit of women today.”

After graduating from Central Saint Martins and the Royal College of Art in London, Jenden worked under John Galliano as an apprentice in Paris. He then joined Kenzo as a designer for a year, before moving to New York in 1998 to become design director of Daryl K, a fashion brand known for its downtown cool. In 2001, he joined DVF as creative director.

In his new role, Jenden will report directly to Diane von Furstenberg and DVF’s board. His Autumn/Winter 2018 collection will debut in February. "I am super excited to have Nathan back as we had the best 10 years of DVF together. He has acquired a lot more experience than he had when he left, and now has even a better understanding of the brand assets, values and purpose," Von Furstenberg told BoF.

The appointment will reunite Jenden not only with Von Furstenberg, but also with Paula Sutter, the brand’s former president, who has re-joined the board of directors. Sutter, who departed DVF in December 31, 2013, most recently served as chief executive of TSG Fashion, a unit of private equity firm TSG Consumer Partners, which has invested in brands including Revolve, Paige and Rebecca Minkoff. The executive first started working at DVF in 1999, just after it was revived in 1998, and is widely credited for helping to grow the label’s business internationally.

The return of Sutter and Jenden marks the re-establishment of the team that made DVF so successful in the 2000s. After a combination of bad business decisions and weakening demand that drove it to the brink of bankruptcy in the 1980s, the brand made a comeback in the late 1990s, thanks to Sutter, who helped to stake its position in the then-emerging contemporary market. By 2015, the label was generating an estimated $500 million in annual revenue, although market sources suggest the number could be less than half of that.

The appointments come at a challenging time for the American fashion business, as the way clothes are made, marketed and distributed is changing. DVF, in particular, faces new market challenges, from a waning wholesale model to the rise of social media-savvy direct-to-consumer labels, which are filching market share from the contemporary sector.

However, market sources suggest that the brand, which aims to sell a stake of its business, will continue to attract interest from private equity firms, thanks to its potential to build up direct business in the US and a larger presence in China, where consumers are increasingly open to new brands. DVF has yet to name a new chief executive, which it has been missing since the resignation of Paolo Riva in November 2016.