Chief executive Sandra Campos says she wants to keep the focus on Diane von Furstenberg as she tries to return the brand to growth after years of turmoil.

Chief executive Sandra Campos says she wants to keep the focus on Diane von Furstenberg as she tries to return the brand to growth after years of turmoil.

NEW YORK, United States — Five months into her new role as chief executive of DVF, Sandra Campos started a new tradition. Every month, the brand hosts “fit sessions” in the store underneath its headquarters in the Meatpacking District, welcoming sales associates and customers who range from size 0 to 12 to try on the latest wrap dresses and jumpsuits. Staff members from across the company — design, production, tech, sales and merchandising — attend and take note of the feedback.

“The biggest challenge has really just been inconsistency,” said Campos, who joined Diane von Furstenberg’s namesake brand in April 2018 from Global Brands Group, where she was co-president of women's apparel overseeing six brands including Juicy Couture and Herve Leger.

In recent years, problems with fit exacerbated the challenges facing the women’s ready-to-wear and accessories brand, founded 45 years ago and best known for delivering the work uniform for second-wave feminists in the 1970s — the wrap-dress.

Fast fashion and digital brands have cannibalised the mid-priced contemporary market, which has been hurt by the lower prices and sharper trends of those new entrants. Department stores, once a core sales channel, have struggled to retain customers. 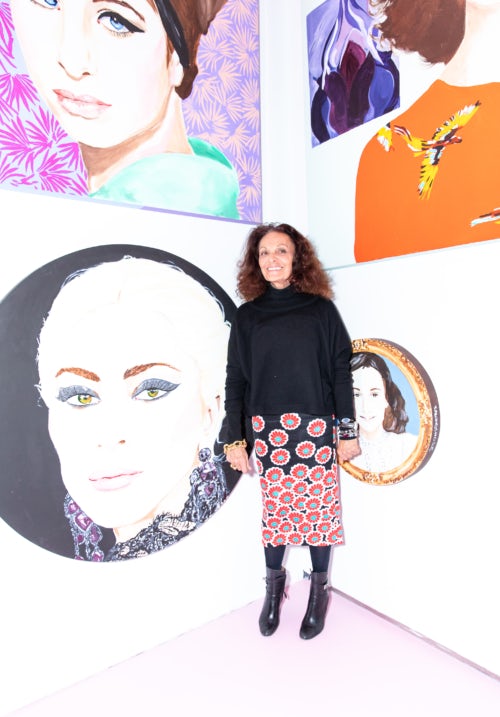 DVF has brand-specific problems, too. Despite its founder and chairman’s name recognition and the iconic status of the wrap dress, the label’s identity has been muddled in recent years, caught between its signature silhouette and the new visions of outside designers.

“I was actually quite surprised at the different twists and turns the company had taken over the last eight-to-ten years,” Campos said. “Some of the decisions that were made to take it in a different direction that basically walked away from our customer.”

The executive plans to refocus by making DVF all about Diane again and giving its customers easy and dependable fashion.

In an interview with BoF, the executive said her turnaround strategy is starting to show signs of success, as DVF refines product and fit, builds direct-to-consumer sales, highlights its founder and creates more effective digital marketing.

When Campos joined DVF, the business was in what felt like a never-ending transition, most recently spearheaded by former chief creative officer Jonathan Saunders, once heralded by Von Furstenberg as “the perfect creative force to lead DVF into the future,” who resigned in December 2017. During Sauder’s tenure, he rethought everything from product to corporate identity and store design. And he was made the public face of the brand, even though Von Furstenberg remained active too, focusing on her women’s empowerment work. But the partnership yielded friction and Saunders left abruptly after 18 months.

Von Furstenberg then brought back designer Nathan Jenden, who had worked at DVF during the boom years — until 2011— to recalibrate. It was Jenden who introduced her to Campos, who joined three months later.

Jenden left the brand in July 2018, first on medical leave and then permanently, and Campos spent six months considering what to do. She met “big names, small names, everyone in between.”

Campos decided DVF’s design ethos needed to be about its founder, not anyone else, and brought in design director Sabrina Shahnazarian, who leads a group of designers and will not have a consumer-facing role in the company.

Campos said the brand identity and product should reflect the spirit of Von Furstenberg, no matter who is the head designer or who is the chief executive. 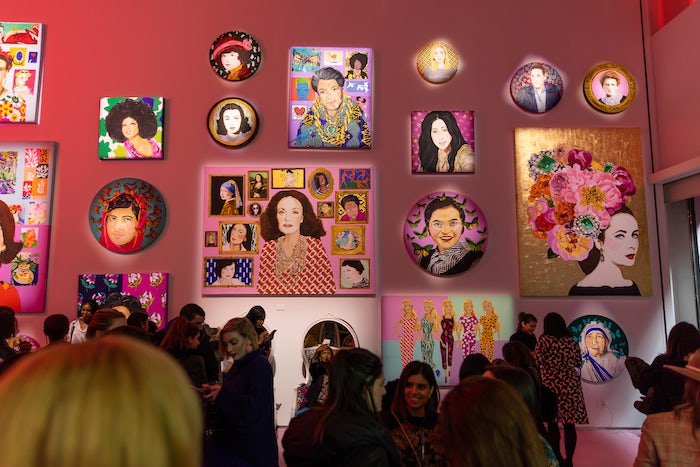 Ashley Longshore's painting on display at a gallery space inside the DVF store | Source: Samantha Deitch/BFA.com

DVF is synonymous with Diane and Diane is synonymous with women’s empowerment, a cause she has long championed. But feminism is fashion’s marketing trend of the moment. Campos said Von Furstenberg’s approach is more authentic because of her history as a female entrepreneur. Since 2010, she has honoured women annually at the DVF Awards, which will be held again on Thursday.

She is also one of the leaders of the New York fashion industry and is resigning from her post as chairman of the Council of Fashion Designers of America in June after 13 years.

“She was an original influencer,” said Campos. “She does know everything and everyone.”

Brand identity is one problem; product is another. Campos said the DVF customer was missing a “feminine” take on easy and practical pieces that its core customer wants. Instead of focusing on an in-the-moment look, DVF is doubling down on pretty, feminine dresses that look good on the body. “We are not the flavour-of-the-month brand,” said Campos. “We are the practical, 45-year-old strong, iconic brand.”

It’s also more inclusive than ever before, with sizing extended to 16 and plans to add further options. (The label is also partnering with plus size e-retailer 11 Honore in Autumn 2018)

Most notably, Campos has increased the products available on the lower end of its pricing spectrum, which she said works better for wholesale partners where there is more pricing sensitivity. Dresses now start at around $230 and scale up to $1,800.

Adjustments to the product offering is starting to resonate shoppers, and revenue is picking up from 2018 when it hit an all-time low. While revenue is still lower than it was three years ago, sales from DVF’s stores were up 38 percent in March, year-over-year, and sales from e-commerce were up 56 percent, year-over-year. The online return rate has reduced by 7 percentage points, and sales generated through social media are up 500 percent year-over-year. Overall, revenue is growing by the high double digits.

The executive is equally focused on beefing up DVF’s direct-to-consumer business, which is already robust compared to many of its competitors. Currently, 65 percent of sales come through DVF’s own channels: its website, 20 owned and operated stores and 64 franchise stores. 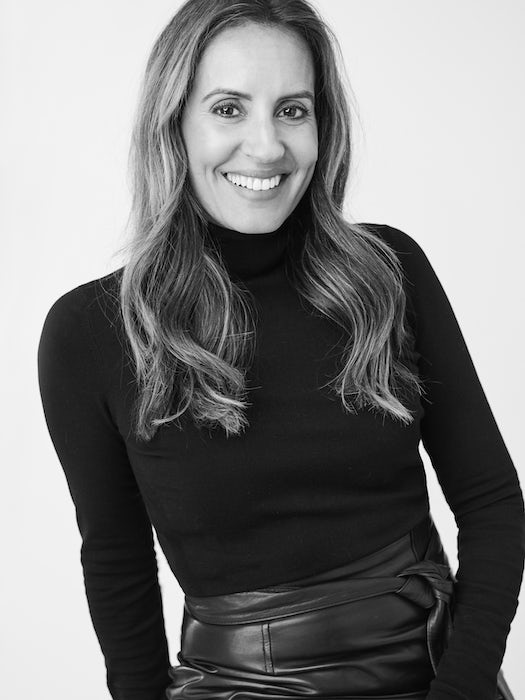 The brand has reduced its domestic wholesale accounts since 2015, shrinking the overall business, but Campos said the company was still very wholesale focused in mindset when she arrived last year. The shift required structure changes within the organisation, including the addition of merchant and inventory planning teams. Now DVF is only available in limited Nordstrom, Saks Fifth Avenue and Neiman Marcus stores.

Overall, Campos has streamlined DVF: the midtown New York and Los Angeles offices were closed, so staff is concentrated at the Meatpacking headquarters and in its office in London. Half of DVF’s sales come from outside of the US, where wholesale plays a more important role.

Moving forward, Campos said the priority is ready-to-wear, so DVF is taking a “pause” on its handbags business, but continues with its eyewear and footwear licensees. “Once we get the ready-to-wear very focused and very clear in terms of the vision, everything else is going to follow,” she said.

As for marketing and communications — something on which Saunders was extremely focused — Campos is still evolving the approach. The brand stopped advertising in print magazines and is creating “conversational” digital content twice a month around ideas, like how to pack for a work trip. A new gallery space in the Meatpacking store will also serve as a physical embodiment of the brand’s inspiration: it currently hosts paintings of inspirational women by artist Ashley Longshore, which is attracting a different kind of visitor to the shop.

“We had to work and make this brand relevant again through the product, through the people who are associated with the product,” Campos said. “[Diane is] very relevant, so there’s no reason why the brand shouldn’t be as well, but it all comes down to consistency on product and how we message them.”

One person with special insight on the brand’s relevance is Von Furstenberg’s granddaughter, Talita, who has applied to transfer from Georgetown University to New York University in order to take on a greater role in the family business. And this spring, the brand will release a “TVF for DVF” capsule she designed. Campos said the younger Von Furstenberg oversaw the lower-priced line and its marketing “from soup to nuts.”

“All the things that Diane stands for, she stands for, but for a younger demographic,” said Campos, adding that Talita’s involvement demonstrates the family’s long term commitment to the business. “Will there potentially be another investor? It could be,” she said, adding that the brand has been focused on the front-end of the business. A strategic investor that brings back-end technology advancements would be the most helpful, and the brand plans to start looking for a potential partner by the summer.

“Turnarounds are really hard. But when you start to see the success come to fruition, then you’re on the right track,” Campos said. “We are small enough to be agile.”

Editor's Note: This article was revised on 5th April 2019. An earlier version of this article misstated that Talita von Furstenberg has been accepted to New York University. She has applied.