A crew of graffiti artists is suing Roberto Cavalli for copyright infringement, unfair competition and false designation of origin in the latest in a string of cases involving alleged misappropriation of street art.

NEW YORK, United States — After claims, last year, that Roberto Cavalli S.p.A. appropriated a Sufi Muslim symbol for use in a Just Cavalli fragrance campaign, starring Georgia May Jagger, the Italian design house, again, finds itself at the sharp end of accusations that Just Cavalli misappropriated visual material, this time lodged by the graffiti artists behind a large-scale mural spanning the side of a building in San Francisco’s Mission District.

In a lawsuit, filed in August 2014, Jason “Revok” Williams, Victor “Reyes” Chapa and Jeffrey “Steel” Rubin alleged that Just Cavalli’s Spring/Summer 2014 collection amounts to copyright infringement, unfair competition and false designation of origin under the Lanham Act. But they don’t stop there. The three artists told the court that Cavalli (by way of its licensee Staff USA, Inc.), along with the retailers Nordstrom, Amazon.com and Zappos.com “introduced a clothing and accessories collection in which every square inch of every piece (including clothing, bags, backpacks, and shoes) was adorned with graffiti art” that looks like their original artwork. 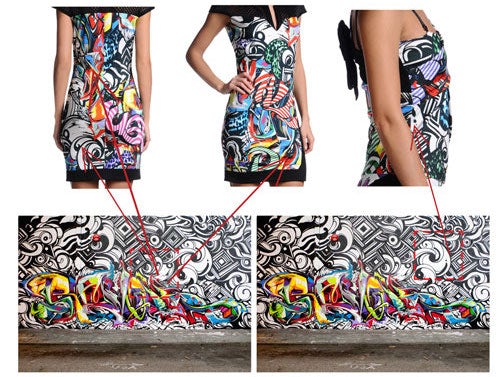 The artists, who are part of the Mad Society Kings graffiti crew or MSK for short, allege that there is more to the case than Cavalli’s slavish copying of their “signature” work. Thanks to the use of high-resolution photography, the artists claim that Cavalli stole the “stylized signatures from the Mural (literally, their names)” and put them on garments, though in a way that is largely unidentifiable.

A coincidence? Perhaps not. The artists and their lawyers suggest that the Cavalli designers knew exactly what they were doing here: “If the literal misappropriation was not bad enough, Cavalli sometimes chose to do its own painting, superimposing the Just Cavalli name in spray-paint style as if were part of the original work, […] creating the false impression that Roberto Cavalli himself was the artist.” After getting wind of the lawsuit, Roberto Cavalli released a statement denying the allegations: “We have heard of some highly inflammatory allegations, which have no basis in fact and are incorrect; we intend to contest and defend against these allegations vigorously.”

Last month, along with the other defendants, Cavalli moved to have all of the artists’ claims, save for one pertaining to copyright infringement, dismissed. They allege, among other things, that the plaintiff graffiti artists “improperly expanded their complaint” to include a number of additional claims, thereby overstating their lawsuit. They also claim that the artists failed to identify any specific elements that Cavalli copied and used in its collection.

But on the heels of the defendant’s strongly worded motion to dismiss, Judge Andre Birotte Jr held that the artists stand a good chance of winning. In an early victory for Revok, Reyes and Steel, Judge Birotte stated that Cavalli’s use of their artwork and, in particular, their names, amounts to “passing off,” the act of misrepresenting the origin of goods or services. In other words, Cavalli very well may have been trying to deceive the public into thinking the brand was the creator of the graffiti that adorns the garments in question, or that it was in some way affiliated with the artists.

Cavalli’s alleged attempt to associate itself with a crew of California street artists comes at a time when overly branded Italian design houses have fallen from favour with consumers, and the aesthetics of street art is rising in the eyes of consumers. The New York Times, published an article this past summer entitled “Graffiti Is Young, Cool, Creative,” charting the influence of the practice. The summer before, English graffiti artist Banksy made much noise on Instagram as he embarked on a month-long residency tagging various New York locations.

As for whether Cavalli was actually trying to appropriate the coolness of the graffiti trio’s work without giving them credit remains to be seen. According to Judge Birotte, the case is set to go to trial. Named as new defendants are Neiman Marcus, Yoox and Luisa Via Roma, which also stocked the Just Cavalli collection in question.

The case speaks to a growing trend amongst street artists to protect their intellectual property. In 2014, alone, a number of graffiti-related lawsuits were filed in US courts. In July, Miami street artist David Anasagasti named teen retailer American Eagle Outfitters in a copyright infringement lawsuit. According to Anasagasti’s complaint, which was filed in New York federal court, American Eagle used his famed Miami “Ocean Grown” graffiti in a global advertising campaign without his authorization. The photographs were also prominently featured on the American Eagle website and in American Eagle retail locations without Anasagasti’s consent.

The following month artist Maya Hiyuk filed suit in New York federal court against Coach, as well as against singer Sara Bareilles, for allegedly using her New York City mural, entitled “Chem Trails NYC,” as the backdrop for advertisements. As for Bareilles, Hiyuk claims her artwork was used on promotional material for the singer’s "Little Black Dress" concert tour, as well as on Bareilles’s album “The Blessed Unrest,” without her authorization. Hiyuk — who has legally licensed her artwork to Billabong, Mara Hoffman and a number of other clothing brands — has previously filed similar copyright lawsuits, including one against Urban Outfitters.

Also in August 2014, street artists Jaz, Ever and Other filed a copyright infringement lawsuit in Illinois, claiming that Terry Gilliam’s latest film, “The Zero Theorem,” features a mural that looks strikingly similar to one they painted in Buenos Aires over four years ago. The artists, who say they are each able to demand tens of thousands of dollars for commissioned works, registered their work with the Copyright Office in Argentina in November 2013, a year after the film was shot.

The growing number of cases at the intersection of copyright law and street art suggests not only that intellectual property protection goes beyond conventional media, such as books or paintings on canvas, it can also be a valued source of protection for street artists, particularly those of the stature of those listed above, despite the fact that many of their works are prominently displayed in public places and may result from vandalism.

But with every legal dispute, courts decide matters on a case-by-case basis and it is difficult to make sweeping predictions as to how these cases will turn out. More interesting, however, are the questions that these cases raise in the interim. Namely: what role does inspiration play in connection with the use of graffiti (Cavalli claims it did not “copy” the artists’ mural but was “inspired” by the graffiti). This is a commonly discussed point of contention for fashion designers, particularly those who have been targeted by fast fashion retailers, which often claim to have been “inspired” by a particular design or collection. Second, will graffiti be given the widespread copyright protection that fashion designs in the US are not afforded? And, if so, does that mean the law values graffiti more than fashion?

We will soon find out.

Julie Zerbo is the founder and editor-in-chief of The Fashion Law.