LONDON, United Kingdom — “I always joke to my mates and say that a comeback is never a setback,” says Nicomede Talavera as he flicks through a clothes rack in his South London studio.

The 32-year-old London-born, raised and based Filipino designer went on a two-year-long sabbatical in 2015, three seasons after launching his namesake menswear label at the end of his BA degree at Central Saint Martins. At the time, the brand was gaining speed and stocked by the likes of Dover Street Market, LN-CC, and Joyce.

“I was creatively burnt out,” the designer tells BoF. “I was getting all these orders and all this attention, but I wasn’t doing creative things.” Talavera was leading a small team of five — who, like his friends and fans of the brand, had been shocked by his decision — but still felt like a one-man band helming design, production and sales.

I wanted to position the label as a luxury label, but as a young designer that’s really difficult.

It took Talavera months to come to terms with what he had to do. “It became a little too much in the moment, and it was a really hard decision to make,” the designer continues. “I did my best to hold it up.”

Some of fashion’s top talents have struggled with mental health issues, but emerging designers are just as, if not more vulnerable to the pressures of starting and running a brand in the fast-moving industry. “I’m a real perfectionist, and I pressured myself to be a certain kind of designer,” he says. “I wanted to position the label as a luxury label, but as a young designer that’s really difficult.”

Talavera knew that if the label was kept running, it would be hard for him to take a break. “I thought to myself, I’ve been in education since I was 4, then came out of school and built this business and had amazing support... I knew it was the only time in my life when I could just pause.”

And pause he did. But fast forward to two years later, Talavera is celebrating the official relaunch of his label. Simply renamed Nicomede, the brand’s first ready-to-wear collection will be exclusively stocked at London’s Selfridges and H.Lorenzo in Los Angeles. 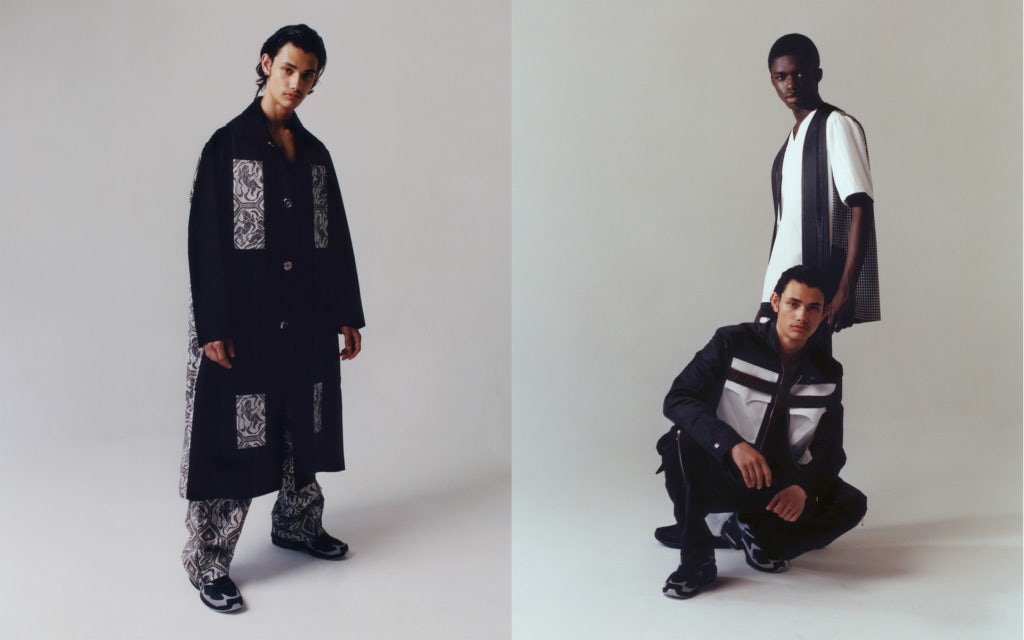 The label’s comeback— a hodgepodge of influences from sci-fi to the religious — is a study in polarities: think the nostalgic and dystopic, and menswear silhouettes crafted with couture fabrics. Black and white stitched belts harken back to young Talavera’s karate classes, and a pink raglan top reinvents the boyish uniform of boys in his childhood neighbourhood of Hounslow.

The back of a “church-like” tailored black coat with sloping pockets is screen-printed with an abstract geometric print, which viewed from afar, reveals mirroring cherubs. Black nylon jackets, vests and track pants are panelled with shades of berry and rust.

As for his core pieces — a Donna Karen-inspired seven-piece wardrobe coined Nicomede.Uniform — standouts include a utilitarian tailored jacket ($1,465) and matching trousers ($1,051) in a molten black moiré, subtly detailed with ruched nylon panels. Everything is made in the UK, save for the Italian knitwear.

The flurry of inspirations can be traced back to Talavera’s sabbatical, when he devoured archival editorials (Steven Meisel is a favourite) and a lengthy movie list compiled by the late Saint Martins professor Louise Wilson, who guaranteed it an antidote for even the most stubborn creative blocks. 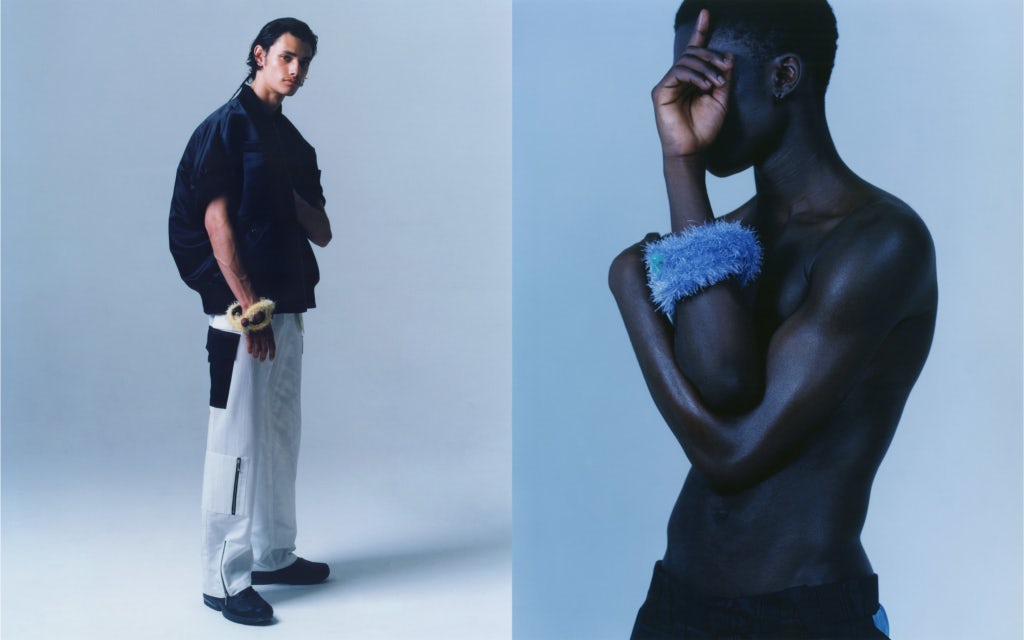 “I was thinking to myself, how do I come back but differently, and in a sustainable way?” Many screenings of “Metropolis”, “Barbarella” and “Blade Runner” later, he decided to revamp his business model: a seven-piece core collection and two ready-to-wear collections per year.

Peppered throughout bi-annual collections will be a roster of collaborations with top brands, which Talavera is no stranger to, having collaborated with Eastpak while still working on his BA. The designer is tight-lipped about his first two partnerships, except that they will involve puffer and duffle coats, utilise a ‘drop’ model and be announced in October.

Aside from bringing other designers’ expertise and inspirations into the fold, the rejig could help keep Talavera’s creative juices flowing. “Partnerships are a sprinkle of magic in between [capsules] without over-saturating the market. It keeps things more exciting and is more manageable production-wise.”

And though his new collection lands during London Fashion Week, Talavera’s pieces won’t be returning to the runway just yet, which “does relieve a bit of pressure.” 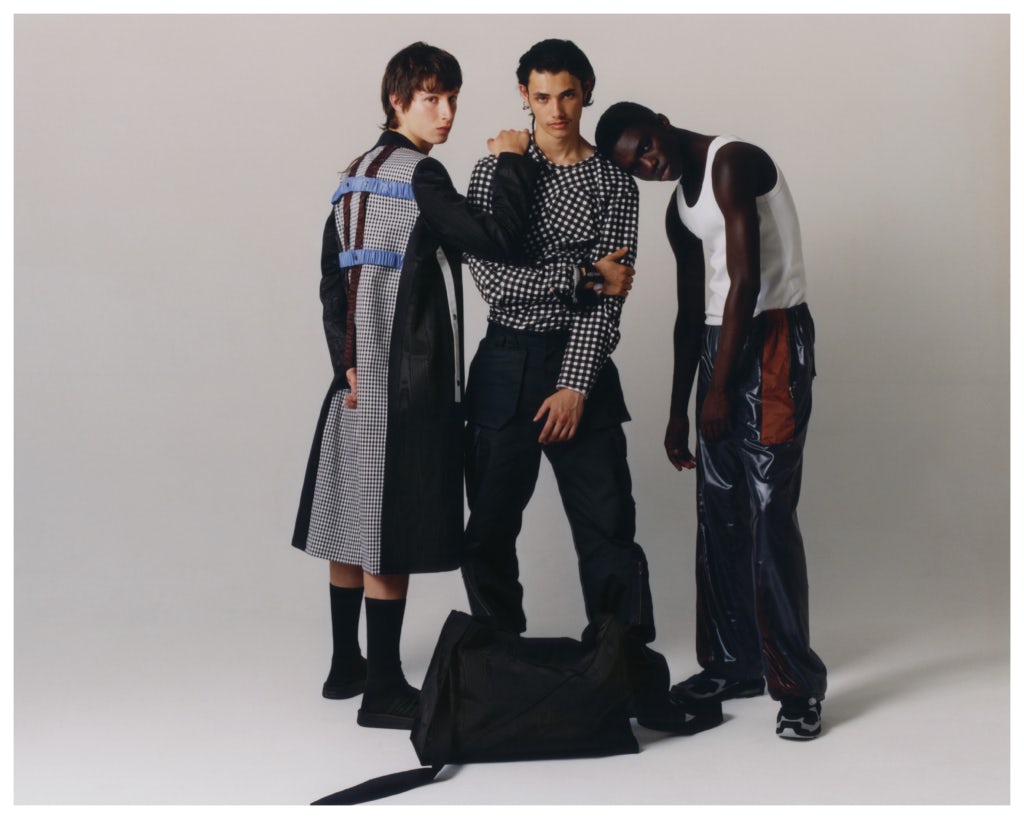 According to D/Ark Showroom’s Director Barbara Grispini, Talavera’s break gave him “time to become fully aware of what the whole process of being a brand is and feeling wholly ready for it.”

“It's difficult to take those type of decisions when buyers, press and celebrities want you. It showed great maturity.”

And already, the brand is slated to blur the lines between contemporary, streetwear and luxury brackets, says Selfridges’ Buying and Merchandising Director Sebastian Manes.

“When we were about ready to buy the collection [in 2015], he actually decided to take a break,” Manes tells BoF. “You can see that he’s learned from his previous mistakes...the product is beautiful and I think it was a smart way to start again rather than diving into different product categories.”

When asked what advice he’d give to younger talents, Talavera pauses to think. “Don’t forget to have an emotional connection to your work. Surround yourself with people you love and creatives that inspire you, and don’t put too much pressure on yourself."