Boss is still recovering from an ill-advised push beyond office wear and into higher-end luxury that overstretched the brand several years ago. 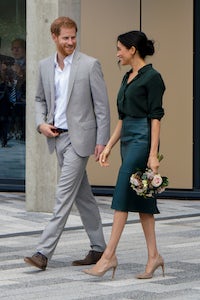 Boss is still recovering from an ill-advised push beyond office wear and into higher-end luxury that overstretched the brand several years ago.

The Duchess of Sussex’s choice of wardrobe was a coup for the German company, better known for wrapping businessmen in grey suits and sensible shirts. The episode revealed several key things, according to Chief Executive Officer Mark Langer: consumers are finding inspiration online, they want instant gratification, and Hugo Boss is still behind the curve when it comes to addressing those two points.

“We took some inspiration from companies that are faster than us,” Langer said in an interview in London.

As brands from Dior to Burberry woo younger shoppers with flash sales and social media hype, the staid German label needs to harness some of their techniques if it wants to compete. That’s why Boss is experimenting with vegan sneakers made from pineapple fibers or capsule collections that include made-in-Germany bomber jackets and sweaters.

Even the mainstay suit is getting a makeover: there’s now a machine washable version; the once-frumpy double-breasted model is coming back; and Boss even reissued the white number that Michael Jackson wore on the cover of the 1982 album Thriller -- albeit with slimmed-down lapels more in tune with current tastes. There’s also no tiger-cub option.

Speed is key to getting consumers hooked on the new trends. The company took inspiration from fast-fashion pioneer Zara, the CEO said, even though the Spanish company operates at a much lower price point and could lap Boss several times with its lightning turnarounds. But the German brand has cut the time to design and develop new collections from eight months to six weeks, using digital tools and skipping fabric-and-thread prototypes. The next step will be to accelerate manufacturing, Langer said.

"We have to recognize our industry has changed," he said.

Boss is still recovering from an ill-advised push beyond office wear and into higher-end luxury that overstretched the brand several years ago. Langer has streamlined its stable of sub-brands, pushed e-commerce and scaled back some of the company’s bigger but underperforming stores. He’s also shifted spending away from magazines and toward online.

One brand that has survived is the Hugo label, which targets a younger clientele with more casual wear. Among the collections are tops featuring the logo printed in reverse. The company is experimenting with letting buyers choose their own wording as it seeks to lift the share of customized products.

The Meghan Markle episode was also important for Boss in another way, in that it helped position the company away from a predominantly male audience. Langer said the female line is an “integral part” of the company, and that Boss wants to be the No. 1 wear-to-work brand for professional women.

It’s all part of an aspiration to lift sales growth from 4 percent this year to as much as 7 percent annually through 2022. The new targets are “ambitious” and ahead of projected industry growth, according to RBC analyst Piral Dadhania said.

Indeed, Langer’s pitch to the investment community at a presentation in London last week was greeted with some skepticism. The shares, which have lost 11 percent this year and trade at about half their 2015 peak, were little changed despite praise from analysts. Langer, who took over in 2016, said he’s not surprised as investors will first want to see whether the strategy works.

“Now it’s down to execution,” the CEO said. “We have to deliver.”