As Fashion Nova, Zara and KKW Beauty top InfluencerDB’s best-performing brands report, what can fashion learn from their partnerships with influencers?

LONDON, United Kingdom — Influencers continue to grow in popularity as a way for brands to appeal to their customer and attract new audiences. However, some fashion brands have been more successful than others, with Fashion Nova, Zara, KKW Beauty and H&M taking the lead in the first half of 2018, according to data from InfluencerDB, an influencer marketing platform.

In the first five months of the year, the top 20 brands created $659,882,860 of earned media value (EMV) — the equivalent cost of traditional advertising that would garner the same exposure as the mentions of a brand or campaign — on Instagram, with 11,000 paid influencers generating content about these brands. Among them are fashion companies like Puma, Calvin Klein and H&M, beauty giants KKW Beauty and Maybelline, and jewellery brand Tiffany & Co.

“You can’t buy your way to the top,” Robert Levenhagen, chief executive of InfluencerDB, told BoF. “The most successful strategies are where you consider the influencer marketing industry like a pyramid,” where the influencers with the most followers aren’t necessarily right for the brand, whereas micro-influencers may be more effective. “If you consolidate that in a smart way you create a lot of organic growth and organic media value.”

Fashion Nova has led the way. While a relatively new brand when compared to the rest, its collaborations with strategic influencers have led to its rapid rise. Rapper Cardi B, who began partnering with the brand before she became a signed artist, was highlighted as a driving force, each of her posts delivering $128,198 earned media value on average for Fashion Nova’s total EMV of over $125 million from both paid and organic mentions. 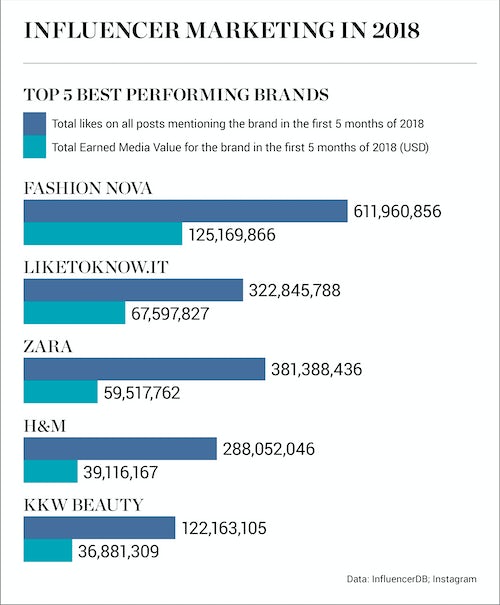 Meanwhile, Zara, which came in third with $59 million EMV, achieved most of this through organic mentions, with paid collaborations accounting for only 1 percent of the total EMV. While campaigns including #iamdenim and Timeless garnered attention, the brand’s ubiquity and product range, as well as 26-million Instagram following, resulted in being mentioned by the highest number of influencers, proving that paid partnerships may not be as important as organic ones.

For both Zara and Fashion Nova, brand buzz was created organically — for the latter, only $1.7 million of EMV was paid for, with the rest driven by the brand’s followers and customers. While undertaking paid collaborations is effective, for brands to earn bang for their buck, organic reach is just as important.

“I’m convinced that influencer marketing is a hugely successful performance or profit-based channel,” said Levenhagen of Fashion Nova’s strategy. “For every dollar they spend, they make more than one dollar of margin, and that’s why they keep scaling and investing in [influencer marketing.]”

H&M came in fourth, followed by Kim Kardashian’s KKW Beauty line — driven by Kardashian’s own promotion of her line to her 114 million followers, earning $37 million in EMV. Meanwhile Sephora, which worked with the highest number of paid influencers, Revolve and Ulta also feature in the ranking.

However, only one luxury brand made it on the top-20 list: Calvin Klein, through its #mycalvins campaign, which earned over $7 million in EMV. While consisting of paid partnerships, the hashtag managed to trickle down to everyday customers by allowing for individual content that is authentic and highlights something personal. Its “always-on” hashtag strategy was also successful — rather than linking a hashtag to a specific event, making it evergreen allows for more engagement.

“When you want to reach the very top of EMV, you need to have mainstream appeal and be available for many influencers,” said Levenhagen, noting that Zara and Fashion Nova have strong organic reach because “they are mainstream enough to have the relevancy, but they are also attractive enough for people to make sure that they want to be affiliated with brands.”