CULVER CITY, United States — Earlier this year, surfing champion Kelly Slater chose not to renew his sponsorship contract with Quiksilver, after over two decades as the face of the troubled surfwear giant. Instead, he called up designer and fellow surfer John Moore (who was, this year, named American GQ Best New Menswear Designer for his surf lifestyle label M.Nii) to help him put his long held ambitions of launching his own brand into action.

The new label, called Outerknown, has attracted a minority share investment from French conglomerate Kering — which is expanding its sports and lifestyle portfolio and will offer the brand operational support in areas such as logistics and e-commerce — as well as an executive team that includes Julie Gilhart, former fashion director of Barneys New York and a consultant who has advised clients like Mulberry and Amazon, and Stella Ishii of The News, a legendary launchpad for young American fashion labels, known for nurturing brands like Alexander Wang and 3.1 Phillip Lim in their early stages.

While Outerknown is anchored in Slater’s surfing fame, the brand is built upon a much more sophisticated, fashionable and grown up product offering than that of the ‘big three’ surf apparel behemoths — Billabong, Quiksilver and Rip Curl — which, in recent years, have suffered severe financial losses.

Outerknown’s menswear collection, set to launch for Autumn 2015, will consist of “wardrobe essentials” such as t-shirts, woven shirts, knits, jackets and chinos in muted, low-key colours “that you won’t get called out on,” said Moore. The womenswear, which will debut for Resort 2015, will be more closely aligned with high fashion trends. “With women we are exploring many more categories, more of an emphasis on style and being relevant to what’s happening in fashion, whereas with men it’s extremely timeless,” continued Moore. “I am hesitant to define it as luxury. I hope we can be more accessible than that. The sweet spot, is anywhere from $70 to $400 — and we’ll have statement pieces, cashmere pieces, outerwear pieces that will go beyond that. Brands like Acne and APC would be great company.”

“There is a huge part of the surfing community that has evolved over the past few years and are looking for something like this. Men and women who have grown up with surf brands, but the key is that they’ve grown up and their interests have evolved. Everyone dreams of a coastal lifestyle — what that surfing lifestyle represents — but they don’t necessarily want to dress head to toe like a surfer,” added Moore.

The new brand comes as luxury houses continue to tap surfing imagery for their campaigns, runways are awash in wet-look hair and neoprene, and a new surfwear labels like Saturdays Surf are finding traction.

Travel, inspired by the globe-trotting lifestyle of pro surfers like Slater, is a key component of Outerknown’s DNA. “When you create clothing that will be used while travelling for a surfing lifestyle, you are going to think about function and quality that will adapt to a lot of different things. Surfers tend to travel light. We want to design clothing that can adapt to different scenarios.” Sustainability is another key pillar, manifest in the label’s use of organic cotton and hemp, regenerated Italian wool and recycled fishing nets. 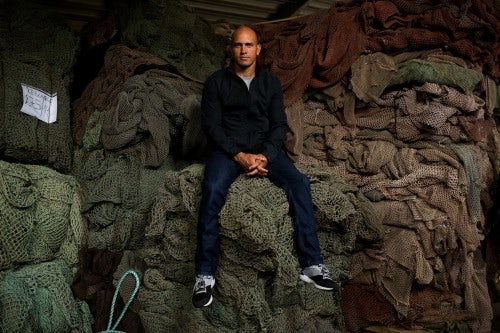 According to Slater, Kering’s support has been critical to the brand’s ambitions to build a sustainable supply chain. “Kering has a whole sustainability team working on it long term and we are able to entrust that to them,” he said. “You have to have certain sized batches. You have to order a certain amount of material. You have to have fire power behind you. We can share the sourcing with their other brands.”

Outerknown will not be selling denim until it can find a producer that meets their environmental requirements. “The clothing market in general is a dirty business,” continued Slater. “We aren’t doing denim to start with, because we can’t do denim in a way we feel is environmentally friendly at this point. It uses a lot of water and if you go to the places where they make the denim, the rivers are blue and there’s nothing alive in them.”

“Our whole goal with the brand is transparency, so the content we create around manufacturing and design process will be a huge part of the marketing of the brand,” added Moore.

E-commerce will be a critical component of the brand’s sales strategy, alongside wholesale partnerships with select stores. “We have our sights set on better retail channels globally like Selfridges and Barneys, but we also love lifestyle stores like Pilgrim Surf & Supply in Brooklyn. I hope we can sit comfortably on floors as diverse as a Barneys and a Pilgrim,” said Moore. The brand also has its sights set on Ron Herman in Japan, as well as global fashion e-tailer Net-a-Porter. “We want to do things slowly and look out for the best distribution channels, which is why we chose Stella Ishii of The News. It’s more important to have distribution in the right places than to have dynamic growth overnight.”

Slater is wary of the scale achieved by surf giants like Quiksilver and Billabong and regards their decision to IPO as the source of their lost credibility and financial decline. “The common thing with those brands, notably with Quicksilver and Billabong, is that they are publically traded companies and all of a sudden the direction has to go where the board wants it to, and where the stock wants it to and you don’t really own it,” he said. “They were more concerned about what the sales people were saying in the shops and it ended up coming down to ‘Gosh, we need to make numbers’, instead of ‘What is your DNA, where did you start and why did you start? What was the purpose behind it?’”

“Because we're small and we’re private, we’re able, on a board level, to scale back if we need to or change direction. I’m not saying we need to be a massive huge company. In a positive way, if we do it well, we might be that, but the intention is to make good products and to source sustainably and produce clothes with people who we know and whose standards we believe in."