NEW YORK, United States — At the end of March 2015, the business website Quartz published a memo sent to Zappos employees by Tony Hsieh, the Las Vegas-based e-tailer’s chief executive. In no less than 4,500 words, the memo detailed the footwear company’s reaffirmed commitment to the Holacracy method, which it first implemented at the beginning of 2014, and went so far as to offer severance to those employees who were not behind the shift in managerial structure.

“While we’ve made decent progress on understanding the workings of the system of Holacracy... we haven’t made fast enough progress towards self-management, self-organisation, and more efficient structures to run our business,” the note read. “After many conversations and a lot of feedback about where we are today versus our desired state of self-organisation, self-management, increased autonomy and increased efficiency, we are going to take a “rip the band aid” approach to accelerate progress.” Hsieh went on to explain that if any of Zappos’ 1,500 employees were not comfortable with the new strategy and gave notice within the month of April, the company would be grant them at least three months' severance. (Those who had been employed for four years or more would be given one month's severance for each year they had worked at the company.)

It feels a little scary, but it also feels like exactly the type of thing that only a company such as Zappos would dare to attempt at this scale.

Even for an experimental chief executive like Tony Hsieh, this was a dramatic move. So, what exactly is Holacracy, and what does Hsieh believe it can do for the company?

Established in 2007 by Brian Robertson, Holacracy is a novel system of organising a workplace. As the founder of a small software company, Robertson used systems like Agile Scrum Methodology, in which a team assesses the success of a project in real time, and adapts and re-adapts its approach to achieve its goals. “He felt that the management hierarchy was too rigid, that it didn’t allow for enough rapid change,” explains Olivier Compagne, one of Robertson’s employees. (Currently, Robertson runs HolacracyOne, a consulting firm that helps onboard clients to the system, with partner Tom Thomison.)  Robertson believed he could apply some of Agile’s project-management tenets to managing people. Holacracy emerged from those ideas.

While Holacracy’s constitution has been updated several times over the years, the basic gist remains the same. In a holacracy, there are no managers and no job titles. “People are not confined to one official job description,” Compagne says. Teams are called “circles” and each circle has a “partner” that is responsible for ensuring that each person fulfils their “role”. An employee might belong to several circles.

The system allows roles to easily shift and means less permission is required to implement a new strategy. If you are assigned a “project” by a partner, you don’t need to ask the partner exactly how the work should be completed. Instead, you just need to complete it. Employees are held accountable by the transparency around tasks: anyone in the company can see what any other employee is responsible for at any given time through Holacracy’s GlassFrog software. (GlassFrog can cost up to $2,500 a month to use, depending on the size of the company. An ultra-basic version is free.) HolacracyOne primarily makes money through consulting fees. It also offers classes for those interested in becoming a certified Holacracy coach. The 4.5-day advanced training programme costs $3,995. A one-off workshop is $150.

While it does do away with most hierarchy, Holacracy is not about completely flattening an organisation. The goal here is to get things done more quickly, so instead of asking for approval from five managers on the totem pole, approval comes from an employee’s immediate circle. “Research shows that every time the size of a city doubles, innovation or productivity per resident increases by 15 percent. But when companies get bigger, innovation or productivity per employee generally goes down,” reads a quote from Hsieh, posted on Zappos’ website. “So we're trying to figure out how to structure Zappos more like a city, and less like a bureaucratic corporation. In a city, people and businesses are self-organising.” 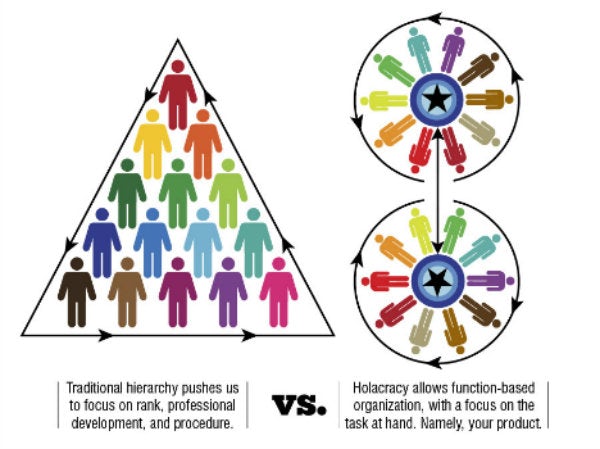 Hsieh, who has, in theory, conceded his power to the Holacracy constitution, began experimenting with the method in the spring of 2013. The first test was the 70-person human resources department, which used the system for seven months before it was introduced to the entire company at the beginning of 2014. (Alexis Gonzales-Black, who left Zappos in March 2015, led that effort. She is now a partner at a San Francisco-based management consulting firm.) The first year was essentially spent educating Zappos’ employees about the methodology, and onboarding teams that were most open to it. (Zappos is the largest out of the 300 companies currently using Holacracy. Others include Medium and Undercurrent.)

Some teams love it, some teams hate it.

To the outside world, many things have remained the same. While no one internally holds titles, each employee has a title for communicating with outside vendors as well as with parent company Amazon, which does not practice Holacracy. “There are some vendors who just want to talk to a senior level executive, not a buyer,” explains Chris Peake, a Zappos employee who has been with the company for 11 years. Peake has held various positions at Zappos, including lead buyer and director of website operations. For the past year and a half he has played a major role in the implementation of Holacracy.

There’s no denying that it has been a challenge to onboard all 1,500 employees. “Holacracy is not a silver bullet,” Peake says. “It’s not all smiles and rainbows and butterflies.” Many team members have struggled with the way meetings are organised. Others have had difficulty letting go of their authority. “Mindset challenges,” Peake calls it. “Some teams love it, some teams hate it.”

But he is also quick to call out the ways in which Holacracy is working. For instance, it only took Zappos Couture — the company’s upscale channel — two months to begin practicing the method effectively. “Our departments were really siloed before,” Peake says. “Before, the merchandisers did their thing. The buyers did their thing.” Because of the way meetings are structured within Holacracy, there is more communication between departments. “Like all the bold steps we’ve made in the past, it feels a little scary, but it also feels like exactly the type of thing that only a company such as Zappos would dare to attempt at this scale.” If there is a new initiative being introduced, marketing, technology and merchandising will all be a part of it, instead of one team trying to catch up another. “In the past, there was a vacuum,” Peake says. “Merchandising and buying might not have let marketing know about trends and brands they were seeing. There were tonnes of one-on-one meetings. Now, because there’s transparency, we’re able to communicate more and bridge that gap.”

While Holacracy can theoretically be used at any type of company, there are ways in which it can particularly benefit a retailer. While Peake says that Zappos buyers have always held some autonomy when it comes to “what to buy and when to bring it in,” the Holacracy system awards their decision-making capabilities even more. Although Zappos’ buyers and merchandisers are trained to rely on data to make good purchasing decisions, they are now being encouraged to go beyond the status quo. Peake sees the system eventually helping to manage outside vendors as well. For instance, each merchandising team, including those for fashion, couture, and performance, orders their products at the same time every month, to be delivered at the same time. The tenets of Holacracy suggest that this need not be the case. If it makes sense for the performance team to get its deliveries in the middle of the month instead of the beginning, the team on that category would have the power to change things. “Right now, it’s all cookie-cutter,” Peake says.

Whether or not Holacracy will work for Zappos in the long run is still unclear. But as the speed of the fashion cycle quickens and competition increases, it’s certain that companies like it will continue to look for more agile ways of doing business. Holacracy may help to sharpen Zappos’ edge. As Hsieh has said, “Like all the bold steps we’ve made in the past, it feels a little scary, but it also feels like exactly the type of thing that only a company such as Zappos would dare to attempt at this scale.”