LONDON, United Kingdom — "THERE WILL BE BLOOD. Get Over It" read the crimson front cover of Newsweek's April 29, 2016 issue. "The fight to end period shaming is going mainstream," declared the accompanying piece.

The most recent wave of feminism has helped pushed the topic of periods and feminine health into the limelight, prompting a much more open conversation around menstruation in the media. Platforms like Refinery29, Teen Vogue and Adwoa Aboah's Gurls Talk have made dispelling taboos around the subject a priority, helping to promote a more candid discussion among the young female generation.

But while the conversation around menstruation is changing, the sector itself has remained relatively stagnant for decades. "Rather than a focus on true innovation [and] adding new products to market, focus has instead been on revamping existing product lines," says Lucy Cornford, category director, beauty and personal care and brand research at Mintel.

Today, Procter & Gamble — which owns Always and Tampax — dominates the space, accounting for nearly 50 percent of the disposable feminine hygiene market in both the US and the UK, which in 2017 were worth $3.14 billion and $445.3 million respectively according to Euromonitor International.

Moreover, thanks to demographic trends and the availability of contraception that eliminates the period altogether, the market is in decline. "As the disposable feminine hygiene market sees declines in sales, manufacturers need to innovate in order to drive growth," says Siana Jannesari, an analyst at Euromonitor. 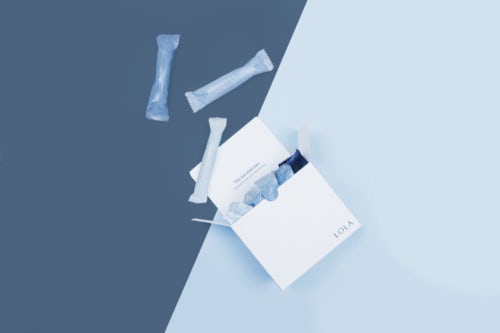 A number of direct-to-consumer startups are aiming to do just that, looking to modernise what is increasingly perceived by consumers as a backward industry by innovating across menstruation products and services. "Many CPG brands are run by men who don't know what it's like to have a period," says Alex Friedman, co-founder of US-based Lola, which launched in July 2015 as a customisable, direct-to-consumer sanitary product subscription business and to date has raised $11.2 million in funding. "In addition to an inconvenient model and lack of product innovation, brands and ads come across as pretty tone deaf and women don't relate to these businesses."

Lola's Friedman and co-founder Jordana Kier were initially inspired by the idea of a subscription model, which they thought matched perfectly with the demands of a woman's monthly cycle. However, they soon learned that the FDA doesn't require manufacturers to disclose tampon ingredients. "The real opportunity was in a brand that was transparent about their ingredients," explains Friedman. The company promises simple products, free of toxins, fragrances or synthetic fibres.

"A big innovation in the market is the use of organic cotton. Big companies just don't use organic cotton," echoes Kate Huang, head of marketing at British startup Callaly, which launched last month with its Tampliner — a modification on the tampon. Huang notes the focus for traditional brands is often on keeping costs low. "They use lots of pesticides, lots of dyes, lots of bleaches. They've made sure the product is really absorbent, but it might not be better for your health or better for the environment. What's interesting in this sector is all of the startups do have transparency at the core."

Many CPG brands are run by men who don't know what it's like to have a period. Brands and ads come across as pretty tone deaf.

Brands like Lola and Callaly are joined by many others: TOTM similarly delivers organic period products to your door on a monthly basis; Dame has created a reusable tampon applicator; Thinx and Dear Kate manufacture period-proof underwear; and Flex's disposable menstrual disc offers a safe tampon alternative.

But it's not just the physical products that are undergoing changes. Newer brands are also re-evaluating the way they talk to their customers. Friedman says a core part of the Lola brand DNA is driving honest and open conversation around menstruation and reproductive health — content and social media are an important part of this. "It's a wonderful way to engage directly with our community," she explains. Indeed, the brand boasts 93,300 followers on Instagram; by comparison, UbyKotex has 37,200 and Tampax has 18,800. 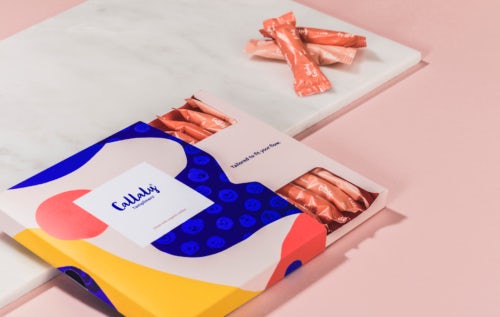 Callaly Tampliners are a modification on the tampon | Source: Courtesy

Huang notes how the traditional branding of products in the space is pretty tired-looking and outdated. "None of them were cool, none of them were interesting. We wanted to create a brand that's eye-catching," she says. "But most important is that we're honest and that we really empathise with our audiences, that we not be patronising." This is significant in today's landscape of visually attuned, Millennial-minded consumers.

It is true that these startups remain a small segment of the overall market. "Even though there may be a lot of buzz arond these new brands, this doesn't mean they are taking over," says Jannesari. "Giants like Procter & Gamble still continue to dominate the space." Plus, consumer brand loyalty in the sector is high, meaning the fight for customers is fierce. According to Mintel, 67 percent of menstruating women use the same brand of sanitary protection month on month. Nevertheless, Euromonitor's Jannesari notes how employing a direct-to-consumer model has allowed these new startups to grow, "as they aren't competing with industry giants for shelf space in retail stores."

Looking elsewhere in the medicine chest, this model has benefitted entrants in the shaving market such as Dollar Shave Club, Harry's (founded in 2011 and 2013 respectively) and other similar competitors. Within five years of Dollar Shave Club's launch, P&G's North American market share in razors and blades dropped from 71 percent to 59 percent, according to Fortune. "Younger consumers are more likely to experiment," Jannesari adds. "The proliferation of blogs and vlogs covering topics around menstrual care has increased conversations and awareness of new and alternative product offerings."

Innovation from the consumer-packaged goods (CPG) side of the market has converged with a growing fem-tech space, with a number of apps emerging focused on period and fertility tracking, such as Glow, Clue and AI-powered Flo, which has raised $6 million in funding over two rounds since December 2016 (both rounds were led by Flint Capital).

[In fem tech] the competition is small and the market is easy to enter.

"In the tech world decision makers of all types are mostly men," explains Flo managing co-founder and chairman Dmitry Gurski. "There are only 6 percent of women among partners of VC firms and 15 percent of executives in Silicon Valley are female." This, says Gurski, has led to the "underdevelopment of feminine care digital projects." Flo's response was to combine cycle predictions with personalised health insights while creating a space for its community of experts and peers to discuss topics around women's health.

As with other recent entrants to the sector, the company aims to directly address "taboos around women's health and the so-called period stigma," something it has attempted to tackle via its "Let's Talk About It. Period." campaign launched in collaboration with investor and brand ambassador Natalia Vodianova. "I told Yuri [Gurski, co-founder and president of Flo] we should join forces and do something really big and meaningful; and we are," she says of the campaign. "Period stigma is omnipresent and strong, regardless of race, geography or economic status," agrees Gurski. "As a platform with over 35 million downloads, we couldn't stay aside."

However, unlike the CPG fem-care market, fem tech remains an unsaturated space with no established giants dominating the sector. "The competition is small and the market is easy to enter," says Gurski, who is very confident about the market opportunity. "Those who are brave enough to overcome the scepticism and stereotypes of tech folks will have big chances to grow a new unicorn."