LUND, Sweden — In today’s fashion market, it is rare for a menswear label to experience a meteoric rise in its first few seasons. Swedish/Kurdish menswear label Namacheko is one of the lucky few; just over a year after launch, the minimalist label is stocked by 38 retailers worldwide, including Dover Street Market, Ssense and Opening Ceremony.

Brother-and-sister duo Dilan and Lezan Lurr launched Namacheko in January 2017 with an Iraqi bridalwear-inspired collection. They had help from Belgian production and distribution company Gysemans Clothing Group — a longtime producer for Raf Simons and Kris van Assche. The collection’s commercial success, which followed an off-schedule showing during Paris Men’s Fashion Week in January 2017, came as a surprise to the siblings.

“We presented the first collection about a year ago and didn’t expect to sell it,” says 29-year old Dilan. “It was very spontaneous, it was more about putting a spotlight on my cousins and their life in Kirkuk.”

The accidental collection was designed to accompany a photobook and short film, which the siblings made as an homage to their Iraqi hometown in December 2016. The designers’ uncles and cousins wore the clothes on the runway, along with street-cast models. 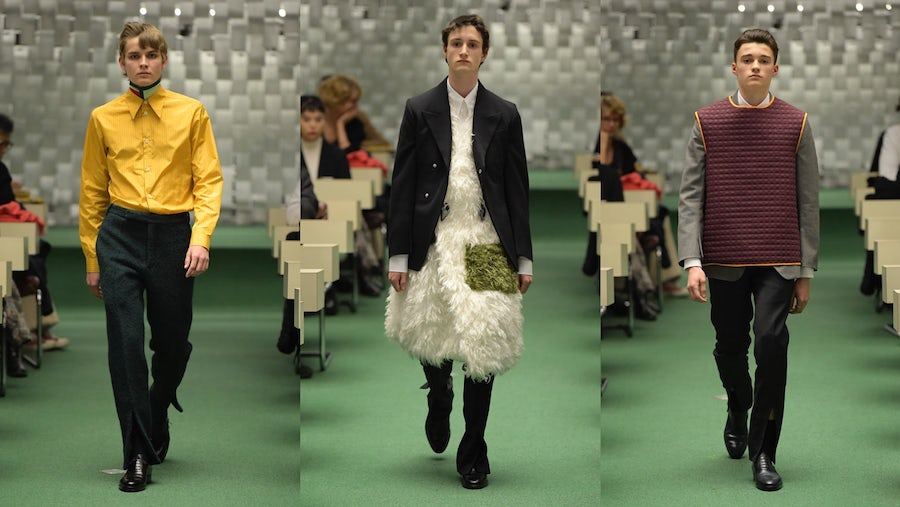 The collection was immediately picked up by influential Parisian boutique The Broken Arm and the duo were invited to show at Paris Fashion Week Mens’ that June — this time on the official schedule.

Namacheko’s experimental yet wearable aesthetic merges stylistic elements from the designers’ Kurdish heritage and European upbringing. The Lurrs moved to Sweden with their parents in 1997 and lived in an area where they were the only immigrant family. Both siblings studied civil engineering in school, with Dilan later earning an art degree.

“People were amazing, but you’re different and you want to be Swedish just like them, you don’t feel that proud to be Kurdish,” Dilan says. “At a certain age, with all that was going on with the Kurdish area in Iraq, all of a sudden you feel proud about what your people do.”

This personal struggle around displacement and cultural identity became the foundation of Namacheko’s design ethos.

“The first two collections were based on our need to feel a rush. We don’t really enjoy our daily lives, there’s always something we look forward to,” says Dilan about the brand’s Spring/Summer 2018 collection, which included paint-splattered shirts ($790), striped cotton jackets ($1,375) and screen-printed gradient coats ($2,400.) “The flashes of colour represent the small daily doses of rush you have, which came from conversations with my cousins [in Iraq] and realising how few rushes they have.”

The collection was well received by retailers: between Autumn/Winter 2017 and Spring/Summer 2018 Namacheko grew by 19 stockists. With that came more responsibility for Lurr, who runs the self-funded label with only the help of his sister.

The Autumn/Winter 2018 collection took inspiration from Kurdistan’s 2017 independence referendum. From Barbara Hepworth-inspired horn buttons, referencing futuristic tribal marks, to neck-scarves and fireproof Kvadrat padded jackets and mohair fur vests, the show explored the power of defining one’s own identity, while being part of a protected collective.

“You’re safe in your identity and country,” says Dilan. “It’s a romantic aesthetic that we want to move into step by step.”

With Namacheko’s wearable yet contemporary designs, political references and the endorsement of respected retailers, the label has great potential to become a force in the luxury menswear market going forward. In the meantime, the pair want to take things slow: “Going from one shop to 38 within three seasons is a big step,” he says.

“What we’ve decided on now is working with them closely and establishing that relationship. We don’t want to do everything, everywhere.”