The Chapter 11 petition — filed with a three-year plan to correct a strategy that had it leasing expensive stores in premium locations — estimates up to $100 million in assets and as much as $50 million in debt.

Unlike some other retailers that have announced massive store closures, Diesel USA doesn’t plan to shutter. Instead, its court papers described a plan to restore the Diesel brand in the US, including opening new stores and retrofitting some old ones to make them cheaper to operate.

The US division, which listed $7.4 million in unsecured obligations to trade creditors, has 380 employees and 28 retail stores in the US, as well as relationships with department stores and specialty retailers. Its bankruptcy comes at a time when several chains that survived the first retail apocalypse are back in the spotlight. Shoe store Payless, which filed for bankruptcy last month, is abandoning 2,500 stores, while mall staples Victoria’s Secret and Gap are among those planning to reduce their footprints. 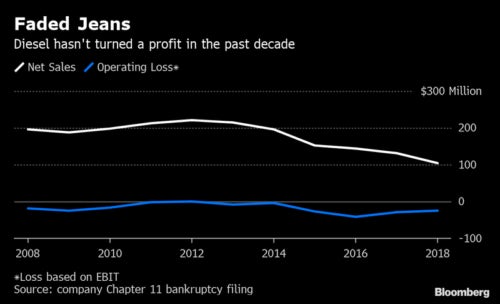 Diesel is best known for its high-end denim and was vital to the rise of premium jeans. Designer denim had a resurgence in the early 2000s, as shoppers flocked to brands like Diesel, 7 For All Mankind and True Religion to shell out $200 or more on a pair of fashion-forward jeans. Profitable until 2008, Diesel USA was just recovering from the recession when certain decisions made by prior management started to catch up with it, according to court papers.

“Prior management began employing a real estate strategy that involved substantial investments in its retail stores,” chief restructuring officer Mark Samson said in a court declaration filed Tuesday. In an effort to put stores in “premium” locations, it entered into leases, like one for its flagship on Madison Avenue in New York, at an inopportune time, just as its sales “dropped precipitously,” he said. Prior management spent $90 million in capital expenditures across the business between 2008 and 2015, primarily to brick-and-mortar stores.

It tried to renegotiate leases with landlords starting more than a year ago, but it’s only managed to secure a single rent concession, Samson said. On top of that, the company said it was the victim in multiple incidents of theft and fraud, resulting in additional losses of $1.2 million over the past three years, including from internet “spoofers” who sent false invoices that the company paid.

Its turnaround plan calls for it to collaborate with social media influencers, enhance its denim collection for female customers, as well as relocate some stores to smaller cost-effective locations with reduced rent.

The denim category has been battling a fashion shift in the US toward more sporty looks like leggings, which the industry has dubbed “athleisure.” It’s been tough, with imports of elastic knit pants surpassing those of denim for the first time in 2017. But there have been some signs of hope recently that denim’s coming back, and jeans rival Levi Strauss & Co recently announced a plan to go public.

The case is Diesel USA, 19-10432, US Bankruptcy Court District of Delaware.