NEW YORK, United States — “We hear so much about where retail is going and its struggles,” says Lauren Santo Domingo, the New York socialite, designer muse, American Vogue contributing editor and co-founder of Moda Operandi. “We've been able to adapt, if not even create, these forces of change. And it's just always been very clear to me, being this woman. I’m the ultimate consumer.”

When Santo Domingo teamed up with Aslaug Magnusdottir in 2011 to launch Moda Operandi, then a “pre-tail” start-up enabling women to pre-order designer pieces straight off the runway, the “see now, buy now” model was far from mainstream. But Santo Domingo knew she wasn’t the only woman who wanted to shop full collections directly from the runway — even if it meant waiting four to six months for items to be delivered.

“Today, Moda Operandi still does this and so much more,” she adds. “The customer that we're reaching is someone that isn't used to hearing ‘no.’ And we certainly don't want to tell her no, and rarely do we have to. And we’ll charge accordingly.” The site caters to ultra-high net worth consumers who, according to the company, spend an average of $1,400 per order, seven times a year. (By comparison, average order value at Net-a-Porter in 2016 was £550, or about $687 dollars.)

While Moda Operandi’s business model has evolved (in 2012, the company expanded into traditional e-commerce, buying and holding inventory, amidst skepticism that the pre-tail model was unscalable), trunk shows still account for 60 percent of revenue. Indeed, there are about 70 active trunk shows on the site at any given time during fashion month. In 2014, Moda Operandi opened its first private, invitation-only showroom in London’s Belgravia to allow clients to see and pre-order select runway collections in person. A second location followed in a townhouse off Madison Avenue in New York two years later.

While the company declined to disclose 2016 revenue, it says sales grew 54 percent from a previously reported $69 million in 2015 (putting turnover for last year at about $106 million).

“The company has been very good at sticking to its knitting,” says Andrew Siegel, a board member and former chairman of Advance Venture Partners, the investment arm of Condé Nast’s parent company, Advance Publications, which has a minority stake in Moda Operandi. “No one ever thought that Moda would be be able to skate though life without competition… Lauren and Deborah [Nicodemus, Moda Operandi's chief executive] have stuck to what Moda does better than everybody else.”

The site's ultra-high net worth consumers spend an average of $1400 per order, seven times a year.

The company’s impressive growth has not come without bumps along the way — mainly the departures of five high-profile personnel in 2013 and 2014, including Magnusdottir, the company’s co-founder and former chief executive, and creative director Taylor Tomasi Hill. In the early years of the company, meeting trunk show minimums was also a problem, as were returns that could not simply be exchanged for another size. “Operationally, the pre-order model has its complexities,” says Magnusdottir, who no longer works at the company. “But the economics are attractive because there is much less inventory risk.”

Nicodemus, previously chief merchandising and marketing officer at Canada’s fine jewellery retailer Birks & Mayors, arrived in October 2013 with several urgent priorities. For one, she hired a merchandising and planning team. “That didn't really exist before — the merchants were editors or they came from an editorial background,” she says. Nicodemus also decided that in order to keep scaling the business, Moda Operandi needed to double down on its distinctive product assortment — namely, “occasion wear,” which has the highest average order value in ready-to-wear, and service. Moda Operandi’s team of stylists has grown from 3 to 28 since Nicodemus arrived, and the goal is to reach 80 by 2020. (The company currently employs a total of 172 people).

While the stylists often correspond with clients over email, opening a space for physical interaction felt like a natural next step for Nicodemus. “We knew that we wanted to have a more high-touch experience, and the only way to really do that is to have a showroom,” she says. Instead of using it as a customer acquisition tool, the company focused only on deepening relationships with its existing client base through a highly personalised experience — and saw an immediate response from clients. 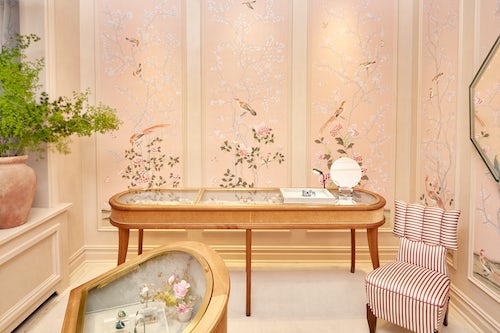 During appointments at its New York showroom, Moda Operandi also complements trunk show samples with pieces from its traditional e-commerce inventory, curated from data the company gleans from online customer behavior. “When she arrives, [the showroom] will happen to have an evening gown that she's put in and out of her cart three times,” explains Santo Domingo. “When a woman walks in here, we know everything about her.” Nicodemus says Moda Operandi is currently working with a third-party logistics provider to bring e-commerce inventory to its London showroom, too.

But the interplay between Moda Operandi’s trunk shows and its traditional e-commerce business is much deeper. Indeed, the company uses data from its pre-orders to help inform its inventory buys. In January 2016, Nicodemus began experimenting with ways to “migrate the philosophy of pre-order from trunk show into boutique” — meaning that two months before inventory orders arrive at the warehouse, customers can start pre-ordering those pieces, too. “Not only did it drive additional sales… it reinforced our understanding of what the client was interested in so we could reorder immediately.” This shift, along with a redesign of the site’s top navigation, boosted the conversion rate by 30 percent. In 2017, Moda Operandi plans to further evolve its website navigation to integrate trunk show product with its in-season offering, allowing users to filter by category and delivery date.

Nicodemus also has her sights set on building Moda Operandi’s presence in non-apparel product categories, which she started to tap two years ago with a move into fine jewellery. “It’s the most complicated business and it's impossible to do online,” she says, remembering her thoughts before testing the category. The company started by only offering fine jewellery priced at $10,000 or more in trunk shows, with a no return policy, to see if there were serious clients. While Moda Operandi’s trunk shows typically last 7 to 14 days, fine jewellery trunk shows were extended to 30 days, what Nicodemus calls the “sweet spot” for such expensive purchases. Nicodemus then brought fine jewellery to the inventory model, where the category’s prices start at $5,000. In 2016, fine jewellery sales grew by 80 percent year-over-year. And so far in 2017, the category is up nearly 190 percent year-on-year.

To support this growth, Nicodemus separated the company’s apparel and non-apparel units into two different divisions in January and hired Jodi Kaplan, formerly of Bergdorf Goodman, as vice president of non-apparel. As of mid-February, sales of non-apparel product has grown 70 percent year-over-year. “I didn't really anticipate that it was going to happen this fast,” Nicodemus says.

Nicodemus is now targeting shoes and handbags. Historically, Moda Operandi only offered pieces that appeared on the runway — usually about 10 percent of a brand’s offerings. In September, it started picking up more styles from commercial collections, but still with a point of view based in “occasion,” meaning its buyers focus on high price points, exotic materials or emerging designer labels. “It's not the 25 percent that the traditional retailers buy,” says Nicodemus.

Two years ago it was harder to get special orders, now we're finding that designers are much more game.

Moda Operandi already works with some designers on customised trunk show collections “based on silhouettes that have been great sellers for us,” says Santo Domingo, citing collaborations with Johanna Ortiz and Emilia Wickstead. And Nicodemus sees untapped opportunities for customisation in non-apparel categories. “Without going into a lot of detail, its something that I’m really negotiating,” she says. “It’s really owning the businesses of non-apparel… not just a colour or shoe, but collections across categories in the online space.”

Nicodemus also has plans to grow the showrooms to about 20 global locations. “I'm glad that actually we had the years in London to to really fine-tune what we were doing with probably the most exacting woman,” says Santo Domingo, describing the clients there as “international princesses and sheikas.” 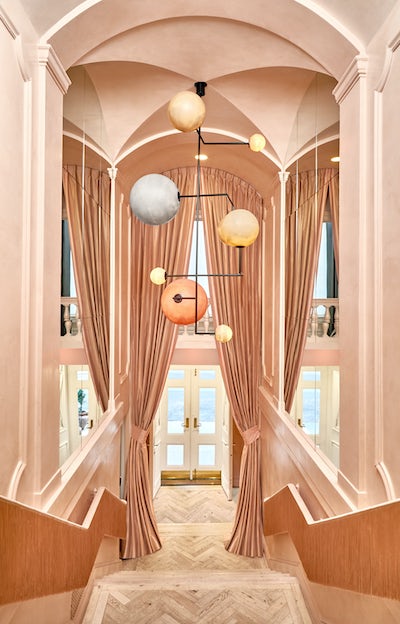 Fittingly, the next wave of Moda Operandi showrooms is set to open in the Middle East, starting in Dubai, where the company is already building out a team of stylists and managers, and Nicodemus plans to finalise a location by mid-summer. Also planned is a “satellite” in Abu Dhabi, which will primarily be used to store high-value product because “appointments with that client are typically in their homes and their palaces,” says Nicodemus. Looking ahead, Moda Operandi plans to open physical showrooms in Hong Kong (or Singapore) and Seoul in Asia; Miami, Dallas, Los Angeles and Vancouver in North America; and Paris and Geneva in Europe.

The showrooms have also been essential for facilitating special orders, including couture, which Moda Operandi offers from five different brands including Giambattista Valli and Schiaparelli. “In the same way that we spent the last five years educating women about young designers and emerging designers… we are now in the same way educating her about haute couture,” says Santo Domingo. The company has also been taking and fulfilling special orders in ready-to-wear. “The commission business is what I'm most interested in developing… It has become so important to us that we have built out a special orders team,” says Nicodemus. “Whereas two years ago, maybe it was harder to get special orders, now we're finding that designers are much more game,” says Santo Domingo.

Will it all be enough to survive in a crowded and highly competitive luxury e-commerce landscape where funding is tightening? To date, Moda Operandi has raised over $130 million from a range of investors, including a $60 million Series E in 2015, but has yet to cross over into profitability.

Nicodemus says the company will be profitable in 2019. “We’re always balancing the growth of the business based on profitability, and that is honestly something that we have to seriously look at, because I shared the amount of opportunity there is,” she says. “The question becomes: how patient are you in delivering those future sales? Do you want to do it today or do you want to do it three years from now? My preference is to do it today.”