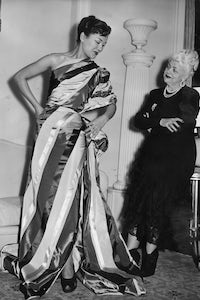 1948: Dress designer Madame Nina Ricci on the right, casting a critical eye at a mannequin whom she has draped with material to make an instant dress | Source: Getty
Share
Comment
By Colin McDowell March 4, 2016 17:55

PARIS, France — The house of Nina Ricci is a slight oddity in the high fashion world of early 20th century Paris. Although for many years it was one of the most successful couture houses in that city, it was never considered to be on the same level as its rivals at the time — Chanel, Vionnet, or Lanvin. Its clientele, which gave it great financial success for much of its life, was much more French haute bourgeoisie than aristocratic and international, as most other French houses were.

Nina Ricci, the house and its eponymous name, grew out of a retail company called the House of Raffin that, although enjoying financial success, was otherwise considered as just another of the many small dressmaking and couture establishments common in Paris in the early years of the 20th century. (By the 1920s, there were 80 such establishments registered.) It was from this level that the house of Nina Ricci was created.

Nina Ricci, was born Maria Nielli in Turin, Italy in 1883 — Nina was a childhood nickname that stuck. Her father was a shoemaker and when Nina — one of five children — was young, he moved the family and his business to Monte Carlo. After his death, the family scattered and Nina, along with her mother and sister, went to Paris. Although only 14, she obtained a job as a seamstress. A few years later, while riding a bus, she met Luigi Ricci, the son of a Florentine jeweller, who she shortly married, changing her name to Nina Ricci. Aged 23, she gave birth to a son, Robert, the man who would later play an even longer-lasting role in the brand than its founder — and who she raised singlehandedly after becoming a widow at only 27 years old.

In 1908, Ricci joined the House of Raffin, where she would work for the next 24 years, controlling her own entirely autonomous department within the organisation, with her own workshops, seamstresses and clientele. Her creativity, although not entirely to bourgeois tastes, was not so Parisienne that she alienated her core customer — the provincial upper middle class woman. In fact, Ricci had a lucrative side business selling her patterns to regional dressmakers and seamstresses as well as selling her creations direct.

Nina Ricci’s son Robert grew up to be a gifted entrepreneur, inheriting his mother’s streak that had made her as good at business as with creativity. He was 27 when, on the death of Monsieur Raffin, the firm was wound up, leaving Nina Ricci, aged 49, very comfortably off and ready for a well-deserved retirement. But Robert, who had trained in advertising and had a very good business head, knew how to reactivate the ambition that had made his mother so successful, not to mention wealthy by bourgeois standards.

Ricci agreed — but on one condition: if the new firm were to become a reality, Robert must be responsible for the entire business side, while she was left to exercise full creative control. He acquiesced, although shrewdly continuing to pursue some other business activities on the sideline, just in case the project failed. In 1932, the haute couture house of Nina Ricci was founded. Robert Ricci secured a premises on the Rue des Capucines for an atelier and fitting rooms and the pair set to work.

From the very first Nina Ricci show, the mother and son collaboration — unique in the history of couture — was a success. While Robert’s business acumen was trusted by investors and business collaborators , it was his mother who was the figurehead. She transformed what had, under its previous name, been an average establishment into a house to be recognised and respected by the women who dressed there.

Unfortunately, the chroniclers of the inter-war period in France — Cecil Beaton, Edna Woolman Chase (editor-in-chief of American Vogue) and Janet Flanner (The New Yorker’s correspondent in Paris) — whose duty it was to inform their readers of the doings of the top houses, made no mention of Nina Ricci. A surprising omission until one remembers their remit: to keep foreign readers, tourists and possible clients (especially Americans) aware of what was being done by the couturiers whose remit was worldwide. This was never Ricci’s target clientele.

Nina Ricci fully entered couture in 1932 and, unlike any other entrant to that world, she had nothing to learn. She never sketched, preferring to create directly on the dummy and, once satisfied, hand over the prototype straight to the workroom. This hands-on confidence and sensitivity to materials puts Ricci alongside Alix Gres in terms of technical skills. Every detail came from her and her alone. She had no hard and fast rules, and was trusted because her customers felt secure in the knowledge that she knew their wishes and needs and put them at the very top of the design experience. In a way, she dressed her clients as she dressed herself: discreetly and gently.

Ricci was proud to dress many of France’s first ladies of theatre and film — and for a moderate outlay compared with the very high prices charged by many other fashion houses. She was respected for being known to maintain the highest quality of design, fabric and workmanship and still undercut houses like Lanvin and Chanel by, on average, a third. She was also one of the first in Paris to offer two ‘intermediary’ collections a year aimed at young women and offering clothes that, requiring only two fittings, were appreciably cheaper than her main range.

With such methods, the label expanded dramatically between 1932 and 1939, increased in number of employees from 40 to 450 and was accepted as dressing more women than any other major label in Paris.

Robert Ricci’s strong will and tempered judgement were the rock upon which his mother stood. They rarely disagreed and, if they did, unlike many family businesses, a solution and reconciliation was found.

In the 1930s, Robert Ricci decided that if the company was to grow — and gain foreign sales — Nina Ricci needed a fragrance. In 1937, he closed his advertising business, realising that his mother needed time to develop the basis on which the Nina Ricci enterprise had been conceived. Both parent and child were determined to keep it a family concern. In 1941 his mother signed over half of the capital of the company to him and the Perfume department was created. Coeur-Joie, the first Ricci fragrance, was launched in 1946, with a crystal Lalique bottle (the family manufactured exclusively for Ricci until the 1950s) and an advertising campaign drawn by Christian Bérard. A slow starter, it eventually caught up to with other major perfume sales.

But the real vindication of Robert Ricci’s determination to have a fragrance that would be acknowledged around the world came with L'Air du Temps in 1948 with its iconic entwined doves on the stopper. One of the great perfumes, it stands with Chanel No 5, Arpège by Lanvin, Joy by Patou and Shalimar by Guerlain as one of the world’s classic fragrances still admired today.

In 1954, Nina Ricci was tiring and the decision was made for her young assistant, Jules-François Crahay, to succeed her. The Belgian designer’s 1959 collection, ‘Crocus’ — which had a suit of the same name — was a triumph, finally giving Nina Ricci the international recognition that Robert Ricci had longed for. It even attracted John Fairchild, the acerbic, quixotic head of Women’s Wear Daily to go to a Ricci show for the first time in many years of following Paris fashion. As he has said, “Francois had a hit on his hands and that suit ‘Crocus’…was to be copied everywhere.” That same year the house went on to create its ‘Mademoiselle Ricci’ line of demi-couture, which presaged the arrival of the brand’s ready-to-wear.

In 1963, Crahay moved on to join Lanvin and his place was taken by Gérard Pipart, who had previously worked for Balmain, Fath, and Patou among others, and had a wide experience of all aspects of fashion, including journalism and ready-to-wear. In his more than 30 years at the helm of the brand, he outlived both its founders — Maria Ricci died in 1970 and Robert in 1988.