Olivier Zahm’s Cocktail of Intellect, Sex and the Seventies

Olivier Zahm’s blend of sex and the Seventies is well documented. But it is the way the former art journalist passes this aesthetic through an artistic and intellectual lens that gives his magazine its unique DNA. 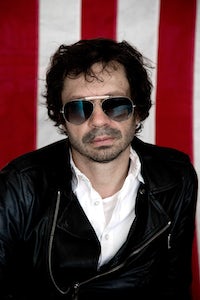 Olivier Zahm’s Cocktail of Intellect, Sex and the Seventies

Olivier Zahm’s blend of sex and the Seventies is well documented. But it is the way the former art journalist passes this aesthetic through an artistic and intellectual lens that gives his magazine its unique DNA.

PARIS, France — “It’s spiritual and sexual, it’s a '70s colour,” says Olivier Zahm, the rédacteur of Purple Fashion, rarely seen without his prescription Ray-Ban aviators and biker jacket, on the hue that is the title of his magazine.

With Purple, this perfectly disheveled polymath — editor, publisher, art director, photographer and, recently, part of the Chanel-assembled jury at the International Festival of Fashion and Photography in Hyères — has built a brand that, over 23 years, has encompassed several magazines, a publishing house, a creative agency, a gallery, two shops, a blog and a travel guide.

But if Zahm’s signature cocktail of sex and the '70s is well documented, it is the way this former art journalist passes this aesthetic through an artistic and intellectual lens that gives Purple its unique DNA. Indeed, in the pages of Purple Fashion, Zahm is as likely to run an in-depth interview with a French feminist philosopher as his black-and-white photos of naked fashion models. JG Ballard, Maurizio Cattelan, Alain de Botton, Richard Prince and David Lynch have all contributed to the magazine.

Zahm got his start in the early 1990s. He launched the counterculture magazine Purple Prose with Elein Fleiss, in 1992, as a reaction to the superficial glamour of the previous decade and began working with photographers like Juergen Teller, Terry Richardson, Wolfgang Tillmans and Mario Sorrenti. The duo later launched the literary magazine Purple Fiction, the fashion book Purple Fashion, the sex-focused title Purple Sexe and, ultimately, Purple, a fusion of Prose, Fiction, Fashion and Sexe.

But by the turn of the millennium, Zahm found himself at a crossroads. “In 2000, I was lost, everything was becoming corporate and commercial. I was a bit depressed and wondering if I should continue.” By 2004, Zahm and Fleiss (who now edits art, travel and culture magazine Purple Journal) had parted ways. “I said to myself, ‘Ok, lets try to adapt to this new period which is all about competition, success, celebrity, money.’” Zahm relaunched Purple Fashion as a hefty bi-annual fashion, art and culture magazine. Today, the title, which remains independent, weighs about 2 kilograms, costs 35 euros per issue and has a circulation of 80,000.

Growing up the son of academics, Zahm, 52, never intended to work in fashion. “I was always going to art shows with my parents. They didn’t care about fashion or brands. They were more hippies and would wear old vintage clothes.” Both were university professors, his mother teaching natural history, his father, philosophy. Until Zahm was 10 years old, the family lived on the campus of the Cité Universitaire in Paris, which became the backdrop to the May 1968 student riots. Zahm attended the Sorbonne, studying philosophy like his father, along with semiology and language. “Roland Barthes wrote a lot about fashion and that was always intriguing to me. I started as an art critic, I didn’t start with fashion and this is why when I look at fashion now I always look at it with an artistic angle.” 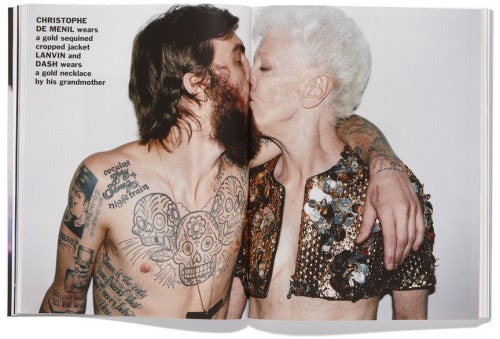 Zahm began writing about the art scene as a stringer for publications such as Art Forum, Art Flash and Art Presse, while still at university. It was at this time that he met Elein Fleiss and launched Purple Prose. “At the time in France you had no interesting magazines for my generation. After a whole decade of 1980s fashion and art, I realized everything was changing and this change was totally fresh and exciting. But there was no media for that so it was right to do a small fanzine to express it. In ’91, ’92, the shows of Martin Margiela were extremely exciting and I did my best to sneak in or be invited. When Damien Hirst did his first show in Paris at Emmanuel Perrotin gallery, the big pharmacy, it was clear that he was a good artist and we wanted to write about it. And Alexander McQueen; it was clear that it was a new voice in the fashion world. So then you understand that this is the fashion of your time, these are the artists of your generation.” Zahm had found his calling: to act as the mouthpiece for his own generation, reflecting back to his peers the work of artists and fashion designers he felt were setting the tone of the times.

In 2009, he began documenting his late-night partying escapades in high-contrast black-and-white photographs which appeared on Purple Diary, a notorious photo blog that would become the seed for a full Purple website.

Over the years, Zahm’s role expanded from producing a small fanzine with Fleiss to running a growing team, negotiating with advertisers, publishing books, art directing campaigns and keeping his magazine in the black. His modest, ordered office on the Rue Thérèse in the 1st arrondissement of Paris is full of medium format cameras and books, which line the olive-coloured walls, categorised with labels like ‘art,’ ‘graphic design,’ ‘sex’ and ‘stars,’ while two cats, Miko and Yoko, pad across the gold linoleum floor. Zahm spends one week a month in a second office in New York’s Union Square and, overall, has a full-time staff of 10 employees, plus freelancers, mostly based across New York, London and Paris. 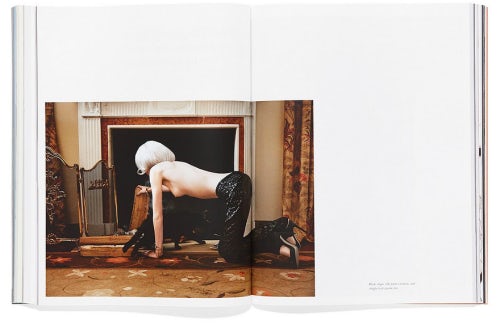 Zahm is a very hands-on editor, shooting images, conducting interviews and working on the page layouts with a range of collaborators.“I wish I could do less. It’s not because I am a control freak, it’s because I need this dialogue, this exchange, so we all know what we are doing. If the photographer has a point of view that is not shared by the make-up artist and the talent doesn’t care who’s shooting, all this division creates a superficial picture,” he says.

“I can’t stand fashion stories that don’t tell anything, when there’s no concept. And when I say concept I don’t mean only a visual concept. It’s not that a fashion story has to tell a message. A fashion story is not didactic or intellectual, but it has to be a photograph that means something.”

When it comes to interviews and other features, he picks his writers carefully, citing the New Journalism as practiced by Hunter S Thompson and Tom Wolfe. “I try to find the right person who knows the interviewee, who understands them and can go deeper and be more intimate with the person. That’s exciting because then it’s closer to art. You are in the middle of people who understand what is going on. But they can’t be too connected either. The danger of that is you end up with some esoteric interview.”

“I know that one of my problems is that sometimes the magazine is too culturally heavy for readers,” says Zahm. “But I like to keep the maximum words when it’s good. I like to think about the future, I like to think what we print has a value and it will be useful for people later. But I’m a mean editor when it comes to bad article. Then I reduce everything until there’s nothing.” 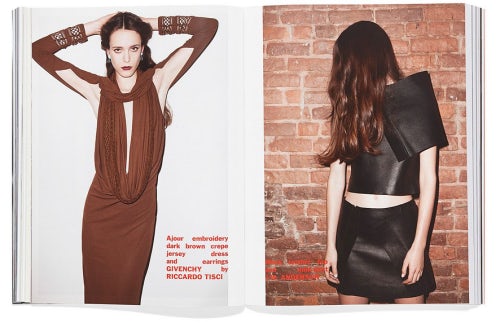 Advertising is a key revenue driver for Purple, but Zahm is as fastidious about the brands that appears in his magazine as he is about the content, sometimes declining ads if they don’t fit with the look of the magazine.

Alongside the magazine, Zahm also runs Purple Institute, a creative agency that does commercial work (mostly art direction) for brands. Past and current clients include Chanel, Yves Saint Laurent, Uniqlo and Iceberg. The agency has also worked on editorial projects for Chanel and Le Printemps.

Revenue is split between the magazine and the agency “exactly half and half,” says Zahm. “Purple Institute exists just to support the magazine. I have no ambition to compete with Fabien Baron. I am first an editor and second an art director. I develop all my projects in the same world as Purple [the magazine], with the same aesthetic and using the same staff, so I won’t develop something that contradicts what I do in the magazine. It limits my possibility of work, because I can’t change aesthetic for a brand.”

Zahm also hosts an “e-boutique” which is being fine-tuned to feature “only product with which we have a real affinity with,” ranging from “a cheap hat from Baker, because we like the skater from Baker, to a carpet designed by Richard Prince that might cost $10,000 and is produced in the Himalayas.”

A refreshed version of Purple.fr, which currently attracts about 250,000 monthly unique visitors, is set to launch in June (new additions include a portfolio for Purple's creative agency, a section called Purple Travel and space for advertising). But Zahm is still feeling his way online. “Print advertising is more and more difficult and I haven’t figured out exactly how to transfer the investment in Purple on to the net. Hopefully I will.”

“I should have been erased by the new magazines and the new generation,” he says, quietly triumphant. Indeed, Zahm was filmed at a fashion show in 2010, at the height of the boom in fashion blogging, joking: “I’m not allowed to have any point of view [on fashion anymore]. You have to ask young bloggers for a point of view, I’m too old.” He even went so far as to say: “I’m doing a blog to kill them all.”

It never materialised, but, today, Zahm says earnestly: “I’m most proud of the fact I’ve survived all these years, that the magazine is still existing and is still part of the magazines that people look at. This is not normal, I should have disappeared.”