On Sex Abuse, We Are All Guilty

On Sex Abuse, We Are All Guilty

It's been a harrowing week of reckoning for our industry. Last Saturday, The New York Times published an explosive front-page report in which almost thirty male models and assistants accused top fashion photographers Mario Testino and Bruce Weber of a longstanding pattern of sexual abuse. On Wednesday, BoF revealed further allegations against Weber, stretching back to 1982, made by four new sources who spoke on the record and several others who spoke on condition of anonymity.

But this certainly isn’t the first time sexual misconduct against models has marred the fashion world. The allegations against photographer Terry Richardson, for one, go back many years.

The fall of Hollywood titan Harvey Weinstein, under the weight of sexual abuse allegations brought by more than 80 women, has changed the cultural temperature on the deep-rooted issue of workplace sexual misconduct in the US and beyond, unleashing allegations against over 50 high-profile men in Hollywood, government, media, technology and, yes, the fashion world. In fashion, like other sectors, the issue is linked to a rigid power structure, but also the prevalence of unstructured work environments, a widespread acceptance of eccentric, sometimes outrageous behaviour in the name of creativity and the underlying fact that sex — not clothing — is what the industry ultimately manufactures, packages and sells.

How should the fashion industry respond?

Shortly after the Times report went live, Anna Wintour — editor-in-chief of American Vogue, Condé Nast artistic director and de facto president of the fashion industry — released a statement saying: “The past several months have been an extraordinary time of reckoning and change, and I, like so many others, have been astonished by the courage of those who have come forward to tell stories of sexual misconduct.”

Astonished by the courage of the victims, but not by the accounts themselves, it would seem. The same day, Condé Nast unveiled a new code of conduct to protect models from workplace abuse and announced, in a joint statement by Wintour and chief executive Bob Sauerberg, that the company would no longer work with Weber and Testino “for the foreseeable future.” The stance was echoed by several major fashion houses including Burberry, Michael Kors and Stuart Weitzman.

“Even as we stand with victims of abuse and misconduct, we must also hold a mirror up to ourselves — and ask if we are doing our utmost to protect those we work with so that unacceptable conduct never happens on our watch,” said Wintour.

She is right. And yet both photographers have worked frequently with mega-brands like Louis Vuitton, Burberry, Michael Kors and Chanel, and top magazines, including Vogue and Vanity Fair, for many years, while their pattern of alleged sexual misconduct was widely known, but largely swept under the carpet by the industry.

The truth is, we are all guilty.

While some are responsible for actively perpetrating sexual abuse, many more are guilty of tolerating — and thereby normalising — the very same misconduct: the brands who hired suspected sex offenders; the editors who turned a blind eye; the stylists and hair and makeup artists who surely witnessed sexual misconduct on set but kept quiet; and the agents who told the models again and again that sexual abuse was simply what they needed to endure to advance their careers, coercing them to do what was necessary to get the job done.

The landmark “Charter on the Working Relationships with Fashion Models and Their Wellbeing” developed last year in a rare example of cooperation between arch-rival luxury conglomerates Kering and LVMH, and the recent code of conduct outlined by Condé Nast, are surely a step in the right direction. But why now? While welcome, these measures seem more about crisis management than addressing the root of the problem.

One thing's for sure: the world is changing. What may have been acceptable behaviour in the 1980s is no longer tolerable in 2018 and it’s time for fashion to take focused, concerted action on this issue. How should this happen? Should the industry appoint a special global body to systematically investigate alleged abusers? Should we assemble a global truth and reconciliation commission on sexual misconduct? BoF invites your feedback on this important issue.

As for Testino and Weber, representatives for both photographers have objected to the allegations, and Weber has denied them in a statement. What’s more, the law firm that represents Testino “challenged the characters and credibility” of those who have made complaints against him and said former employees were shocked.

But the accounts of more than a dozen victims and witnesses suggests otherwise. These cases may ultimately go before a jury, though it’s far more likely they will be settled out of court. Either way, those in positions of power in the fashion industry, from chief marketing officers at brands to editors-in-chief at media giants, need not await these judgements to begin some much needed soul-searching.

But the process of reckoning must begin with the perpetrators themselves. If Testino and Weber — and all of those predators who have not yet been widely named, but who are now nervous about what may emerge in the public domain — were to actually admit guilt, apologise and take responsibility for their behaviour, this could set off a powerful chain reaction, accelerating the fashion industry's long overdue self-reckoning. The entire industry is waiting to hear from them.

Burberry sales slip in holiday quarter. The British brand reported a 2 percent drop in retail revenue for the holiday quarter, after sales in Europe slipped against a year ago when a fall in the pound had helped its home market. Burberry warned that chief executive Marco Gobbetti's plan to develop "it" handbags and higher-priced fashion won't pay off until at least next year. The company has yet to name a successor to creative director Christopher Bailey, who announced his departure in October.

New speculation for the top post at Burberry points to Kim Jones, who is exiting Louis Vuitton. The London-born designer is stepping down from his role as men's artistic director, a role he has held for seven years. His last collection for the LVMH-owned house will be presented on Thursday, amid speculation that he may be headed to Burberry.

Mobile drove Yoox Net-a-Porter’s record 2017. More than 50 percent of Yoox Net-a-Porter’s sales in 2017 came through mobile devices for the first time, according to a statement of the group's 2017 preliminary results. The fashion e-commerce leader surpassed €2 billion euros (about $2.6 billion) in net revenues, up nearly 12 percent year-over-year.

LVMH watch and jewellery sales up more than 10 percent in 2017. Swiss-made luxury timepieces are emerging from a severe downturn as Chinese demand picks up and the industry's biggest market, Hong Kong, returns to growth. Overall, Swiss watch exports rose 2.8 percent in the first eleven months of 2017.

Tiffany & Co's holiday sales rise. The New York-based retailer posted a rebound in its holiday sales, helped by a new home and accessories collection that included pencil holders, shaving brushes and rulers. Same-store sales rose 3 percent in the final two months of 2017. The company also says it expects annual sales to increase by about 4 percent.

Hugo Boss sees recovery for stores, online and the US. The German fashion house reported a 5 percent increase in currency-adjusted sales in the fourth-quarter. Sales rose 1 percent to 735 million euros ($902.14 million). After a string of profit warnings, the brand has been slashing prices in China to bring them closer to European and US levels, making efforts to appeal to younger customers, investing in its website and closing loss-making stores.

Highsnobiety raises $8.5 million venture round. It was led by London-based venture firm Felix Capital and the terms of the deal were undisclosed. The influential streetwear site plans to use the new funding to help scale its branded content, e-commerce and events businesses.

OAMC sells stake to Onward Luxury Group. The Paris-based menswear brand has sold a minority stake in the business to Onward Luxury Group, an Italian subsidiary of Japan's Onward Holding Co. Ltd, for an undisclosed sum. The deal will enable OAMC to launch its own e-commerce operations, open its first retail store and expand into new product categories. 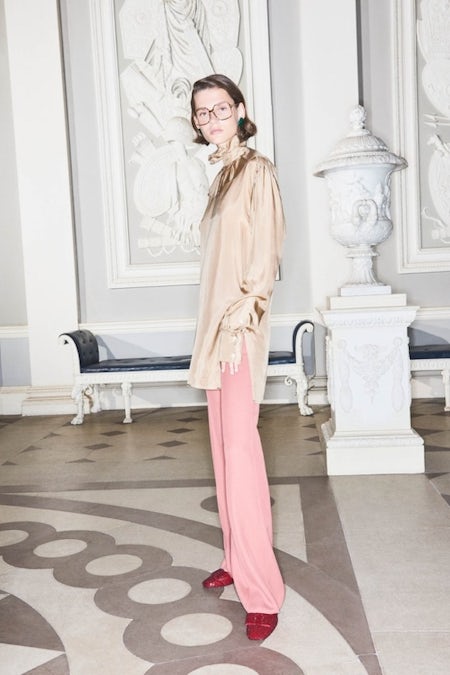 Victoria Beckham draws uproar over thin campaign model. The fashion designer has come under fire on social media for using what many people consider to be too thin a model to advertise her eyewear. It is not the first time Beckham has been accused of promoting an unhealthy body image while advertising her luxury products. The designer will join the London Fashion Week schedule for the first time in September, for a 10th anniversary show, celebrating a decade in the business.

South African protesters ransack H&M stores over 'monkey' hoodie ad. A group of protestors targeted six H&M stores in South Africa's Gauteng province, trashing displays and pushing over mannequins. H&M stores in the region are now temporarily closed. The protest comes after the Swedish retailer shared a campaign photo of a black boy wearing a green hoodie with the inscription "coolest monkey in the jungle," triggering outrage on social media. H&M said it has hired a diversity leader to address the problem.

Zalando to spend to build market share this year. The German online retailer reported a recovery in fourth-quarter earnings, with sales rising to between €1.323 billion and €1.345 billion. It does not expect to increase margins in 2018, as it keeps spending on faster delivery, making its apps and website more personalised, and the launch of beauty products on its site in spring or summer.

CVS will no longer photoshop beauty ads. The company said it would step away from using airbrushed photos to promote beauty products in stores, online and in marketing materials. To indicate a photo's authenticity, CVS will start putting a watermark on images that haven't been significantly retouched.

Alibaba's Taobao on US blacklist list again for fakes. The US Trade Representative put Taobao on its blacklist for the second year in a row over suspected counterfeits sold on the shopping platform, a move the Chinese e-commerce giant said did not reflect its IP-protection efforts.

JD.com targets future growth through logistics and regional expansions. China's second-biggest e-commerce firm invited a select group of investors to join a new funding round that values its logistics business, JD Logistics, at around $10 billion. In addition, JD.com led an investment in Vietnamese e-commerce firm Tiki.vn to expand its Southeast Asia business amid competition from Alibaba and Amazon, and plans to invest more than 20 billion yuan ($3.11 billion) in China's northeastern "rustbelt" regions over the next three years.