The designer partnered with the German footwear brand as part of its mobile pop-up series, Box, which is heading to Los Angeles in March 2018.

PARIS, France — Rick Owens doesn't shy away from subversion, so in some ways it makes perfect sense that the designer has teamed with Birkenstock, the German footwear brand best known for being fashionably unfashionable.

On April 17, Birkenstock's travelling mobile pop-up space, The Box, will park outside the Rick Owens store on La Brea Avenue in Los Angeles. To mark the occasion, the designer has reinterpreted three classic styles in four different fabrications, including felt, pony hair and full-grain leather. The pop-up will also feature styles from the comfort-driven, obsession-inducing brand's main line, as well as select Rick Owens ready-to-wear, furniture and accessories.

A mainstay of the ugly-chic trend beloved by designers and eco-conscious consumers alike, Birkenstock has been courting the fashion industry for some time. In June 2017, it staged its first showcase in the Tuileries Garden during Paris Fashion Week. The following month, it launched The Birkenstock Box in Berlin with retailer Andreas Murkudis, followed by New York with Barneys New York and Milan with 10 Corso Como.

The Rick Owens project marks the first time Birkenstock has invited an individual designer to collaborate on the retail space. 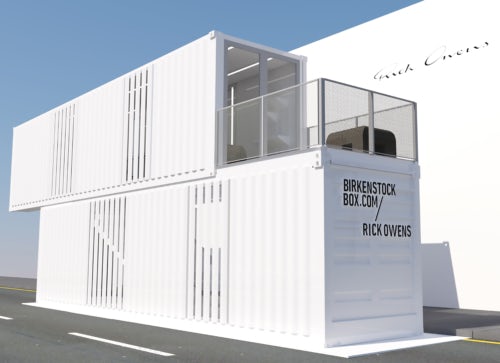 “Just a fashion designer would be less relevant,” said the company's chief executive Oliver Reichert. "Rick Owens, however, is different. We collaborated in architecture, design and fashion.”

Reichert says the brand doesn’t consider itself part of the fashion system. “We are beyond fashion but we're relevant to it as an iconic classic, a genuinely universal wardrobe staple,” he said. The purpose of the Box project to show Birkenstocks in a new light. “The versatile mobile structure is like a blank canvas and all our partners make this a meaningful venture.”

For Rick Owens, whose longstanding partnership with Adidas ended during the Autumn 2017 season, the Birkenstock collaboration provides an opportunity to play with the codes of an iconic brand in a city that claims him as its own. (Owens moved to Los Angeles when he was 18 and starting his line there in the mid-1990s when he was living out of the Chateau Marmont. He later decamped to Paris, which he has called home ever since.)

“I agree with the values Birkenstock has promoted all along — steady longevity and personal well being,” says Owens. "And being able to combine our aesthetics with this project together in LA feels really satisfying.”

Editor's Note: This article was updated on 12 February 2018 because the dates of the retail installation were amended after publication. The Box will be open to the public from April 18 through April 21.