The slowdown, while expected, comes just as sales growth at rivals including LVMH's Louis Vuitton and Christian Dior brands leapt ahead of forecasts in the second quarter.

PARIS, France — Sales at Gucci rose more slowly than expected in the second quarter, taking the shine off a jump in margins at the Italian fashion label and an otherwise solid performance at parent Kering.

The conglomerate relies on Gucci for the bulk of its sales and profit, and investors are keeping a close watch on the extent to which it might lose steam after three years of explosive growth.

The brand is partly at a disadvantage due to a high comparison base, but the slowdown, while expected, comes just as sales growth at rivals including LVMH's Louis Vuitton and Christian Dior brands leapt ahead of forecasts in the period. 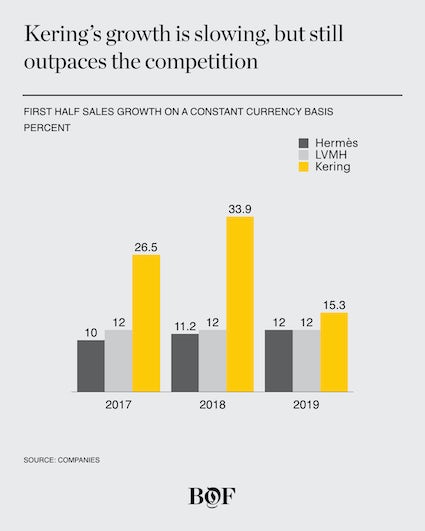 A weak performance in the United States, linked partly to a drop in Chinese visitors there, dragged on Gucci's sales and that of other Kering labels, which include Saint Laurent, the group's Financial Director Jean-Marc Duplaix said.

"It's a market that's becoming more difficult, we've seen that for all our brands," Duplaix told reporters.

Gucci's margins jumped to 40.6 percent at the end of June, however, already exceeding the medium-term goals set out a year ago, and bucking an industry trend of flatlining profitability in the second quarter. Margins were helped by the group improving its sales per square meter in stores.

"There's still potential for profitability to improve (at Gucci), we're working on it," Duplaix said.

Overall, Kering reported a 15.9 percent rise in revenue for the April to June period to €3.85 billion ($4.3 billion), up 13.2 percent on a comparable basis — roughly in line with analyst forecasts and helped by a slight turnaround at its Bottega Veneta label.

Recurring operating income exceeded forecasts in the first half of 2019, rising 25.3 percent to €2.25 billion.

Kering is 41 percent owned by a family holding company. The publicly listed group's share of net profit in the six months to end June fell sharply from a year earlier, down 75 percent to €580 million, hit in part by a fine from Italian tax authorities after it agreed in May to settle a dispute centered on Gucci's revenues.