LONDON, United Kingdom — “We need to invest in order to put it back on the fashion radar,” says Eric Langon, chief executive of Sonia Rykiel and the man charged with modernising the Parisian house, whose eponymous founder made a name for herself in the 1970s as the “Queen of Knitwear.”

Leaving his role as the chief operating officer of Lancel, the executive joined Sonia Rykiel in 2012, the year in which First Heritage Brands, a subsidiary of Fung Capital Ltd., the private investment arm of the families of Dr. Victor Fung and Dr. William Fung, took an 80 percent stake in the brand for an undisclosed amount. Until that point, Sonia Rykiel had survived as one of the last wholly independently-owned fashion businesses in Paris, spanning luxury ready-to-wear, contemporary, childrenswear and homeware. But at the time of the investment, things were stagnant: the company’s revenue stood at about €90 million ($119 million) for 2011, the same approximate figure as the year before, while in 2012 it saw a small rise to €94 million.

Nathalie Rykiel, daughter of Sonia and the brand’s chairwoman, said at the time, "I took the brand as far as I could alone. But the family needed the financial, strategic and human resources to make this brand what it was destined to become." Today, the goal remains: to globalise a euro-centric business by leveraging the iconic founder of an irreverent Parisian style synonymous with the Saint-Germain, but essentially unknown in the shopping districts of Beijing and Mumbai.

Together, Langon and First Heritage Brands chief executive Jean-Marc Loubier devised a plan, which began with the core product. “It was important for us to really inject substance in our ready-to-wear and to be more actual, modern. To really become desirable again — a brand that customers will look for. Julie is, of course, a major launch,” says Langon.

This Paris Fashion Week, Julie de Libran will show her third collection since her appointment as creative director. She cut her teeth as a designer at Prada for ten years, before going to Louis Vuitton as the womenswear studio director for five years, as Marc Jacobs' right hand woman. By and large, the press agrees that de Libran has the substance and style needed to pick up the baton: her European heritage and suitably déshabillé look mean she is regularly photographed as a style influencer, and her American upbringing will prove useful in Langon’s expansion plans. “She was raised in the US, so this, her vision of the Parisian elegance, the commerciality of the clothes, the wearability — she has it naturally,” he says.

De Libran’s first outing for the brand, a well-received Spring/Summer 2015 collection, was seen by many as the first sure step forward for the brand since the departure of its founder in 2009. “I went through 40 years of Sonia Rykiel fashion: archives, books, photographs and stories. I then closed everything and designed a collection that felt relevant and desirable for women today, using my selective memory,” says the designer.

Her second collection, Autumn/Winter 2015 was shown in the brand’s Saint-Germain store, filled to the rafters with 50,000 books, a creative concept which has informed the retail environments of the brand’s recently refurbished flagships in London, Paris and Ayoma, Japan. Juergen Teller has shot its campaigns.

Unlike its larger competitors, Sonia Rykiel is still very much a ready-to-wear house. The business was founded on knitwear and, to this day, its classic, often deconstructed, rough-hemmed jumpers, priced between €300 and €1,190 ($335 and $1,330) are a key category in both the main line and the brand’s more accessible contemporary line, ‘Sonia by Sonia Rykiel’. Because of their ready-to-wear focus, De Libran and Langon do not have the luxury of sending directional clothing onto the catwalk, to splashily re-assert the brand’s positioning, while driving consumers to a more practically designed accessories lines. What is shown, must sell.

For the main line, she must find traction with the same confident, aesthetically-literate customer Claire Waight Keller and Geoffrey de la Bourdonnaye at Chloé are seeking. But independent, creative women who will spend €500 on a pair of bell-bottom jeans are aggressively hunted quarry in the luxury womenswear market. And de Libran’s job is made harder by the fact that, including the diffusion line, the designs she oversees range in price from about €80 to €2,000 — rather than being able to focus on this luxury demographic, the label must also fight for consumer share from accessible luxury titans like Tory Burch and Michael Kors.

With this in mind, it shouldn’t surprise that de Libran has overhauled the brand’s accessories. The Domino bag (priced between €800 and €1,800) was relaunched from the archive, and small leather goods and footwear are in the offing. Asked what would give the brand significant global traction, the designer tells BoF, “Product. Making it desirable, accessible and being attentive to quality.”

Christina Binkley of The Wall Street Journal wrote of the label’s 1970s-inflected second runway collection, “The verdict is in with the fashion crowd. Sonia Rykiel — in the hands of the former studio director for Marc Jacob’s Louis Vuitton — has turned from moribund to must-have.” Langon declines to share precise metrics, but says de Libran was responsible for high-teen double-digit growth in ready-to-wear sales for her first two collections.

Despite a high-profile H&M collaboration in 2010, a move that has also aided similarly-sized houses like Balmain, Sonia Rykiel is less known to consumers in China, Africa, Russia and India — those that will drive global growth in the future. What’s more, its nuanced, subtle brand codes of feminism, irreverence and Left Bank insouciance are not the easiest to translate.

Langon knows this and it informs his retail and market strategies. “The focus is on markets where we are historically present and have brand awareness. The European market, and key luxury Asian markets: Korea and Japan. That is where we can leverage the investment in the product quicker,” said the executive. Indeed, Sonia Rykiel has been present in South Korea and Japan for over 20 years. 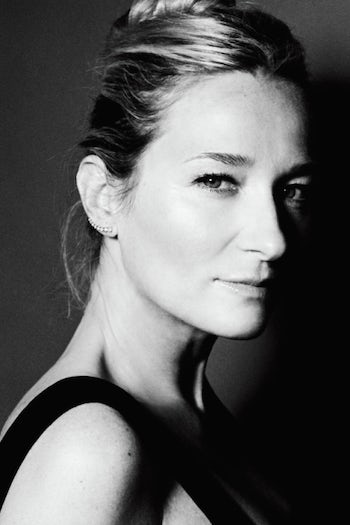 “Our strategy really is not to invest in the Chinese market. We have a big move towards the US. Europe stays high, obviously, and the [market] share value is growing, so revenues are really being split down between Europe, Asia and the US in a more balanced way than it was before,” he continues. Langon hopes the US drive, which already includes a shop-in-shop in Bloomingdales, and will include a New York flagship, will have an impact on global consumer awareness. New and refurbished stores in Paris, Hong Kong, New York and across Asia have recently opened or will open within a year — along with a re-launched e-commerce site.

Currently, the brand maintains key distribution partnerships in Taiwan, Japan and Korea, operates 25 stores worldwide, nine of which are dedicated ‘Sonia By’ stores, and sells its four lines through 630 wholesale doors. “I don't divide it in terms of primary or secondary. Whether it is wholesale, retail. What is important is how our product reaches the customer, and how I manage to send the right message from my brand,” says Langon.

Mario Ortelli, senior luxury goods analyst at Sanford C. Berstein, believes that, even in established markets, Sonia Rykiel would benefit from clearer messaging. “The brand is not at the top of many consumer minds — that’s the biggest challenge, but it’s also not clear what the price positioning is. There isn’t a clear focus for a consumer; it is a brand for an older consumer and it is a brand with a diffusion line for younger consumers.”

“It will be interesting to see the positioning that the new owner will decide for the brand. With a few exceptions, when the investment comes from these Asian conglomerates, they create a more accessible and more widespread brand,” says Ortelli, of its potential to become a global brand.

Being part of a retailing proposition the scale of the Li & Fung enterprise has distinct advantages. “The Hong Kong First Heritage Brands platform helps commercial development. It's quite difficult to expand from France in those countries without having the local representation. We are a small company and to expand in foreign countries we need to have that back-end support: logistics, finance, HR, commercial development,” explains Langon.

The executive maintains that Sonia Rykiel can “express itself in the [luxury and contemporary] markets. It's really two different studios and we want to separate the two studios — no common design. We want to stick to that strategy, to have two very differentiated lines, not only in price point.”

Such broad positioning will make expansion that much harder, as Sonia Rykiel enters more and more markets. There’s no image of the jet-set lifestyle in this brand’s codes to fall back on. But with a promising designer at the helm, Langon is confident the world can be won over by Sonia Rykiel’s je ne sais quoi.