SAN FRANCISCO, United States — In 2008, just a year after Lululemon’s IPO, Gap, Inc. acquired a little-known women’s activewear label called Athleta for $150 million. Ten years later, Athleta is a significant driver of Gap Inc.’s growth and projected to hit $1 billion in sales in the next few years. In 2017, sales at Gap’s smaller brands — including Athleta, contemporary retailer Intermix and bridesmaid dress-focused Weddington Way (which it recently announced that it was shutting down) —were $919 million, up 18 percent $776 million in 2016. Athleta is thought to make up the significant majority of that revenue.

While Gap Inc. continues to close underperforming Gap stores, it is opening Athleta locations at a steady pace, with 16 new stores added in 2017 alone.

Over the past decade, Athleta, which was founded as a catalogue company in 1998, used a fairly standard playbook to increase sales at a time when consumer interest in health and fitness was growing. (The global wellness industry — which includes fitness, spa tourism and alternative medicine — was valued at more than $3.7 trillion in 2015, up from $3.4 trillion just two years earlier.)

Along with expanding its presence in physical retail, the brand worked to widen its customer base beyond 35-to-55-year-old suburban women who made up the majority of its audience by offering a broader range of products and styles. “The audience was very niche and narrow,” explains president and chief executive Nancy Green, who oversaw the launch of sub-brand Athleta Girl in 2016. “We still have that ex-urban customer that is concentrated, but the [age range] is broadening both up and down.”

No weird science, then. And yet, Athleta’s continued success might seem surprising given the “death of athleisure” headlines that have surfaced over the past year, in part inspired by the rebound of the $92.9 billion global denim market, which grew in 2017 by about 4 percent — its first jump in three years. Just back in 2016, Nike chief executive Mark Parker even went so far as to say that “leggings are the new denim.” That statement didn’t quite pan out, however.

Growth in the activewear market is not as explosive as it once was. The global market for sports apparel — which includes performance, outdoor and sports-inspired clothing — has grown at a compound annual growth rate (CAGR) of 5.6 percent since 2012, passing $180 billion in 2017, according to Euromonitor International. It’s expected to hit $215 billion in 2022, but at a significantly slower CAGR of 3.4 percent.

While things have slowed up a bit, activewear is still outperforming the fashion market.

However, the market is still growing more quickly than the global apparel industry overall, which is only projected to climb at a CAGR of 1.9 percent over the next five years (to $1.5 trillion). “There is a malaise around apparel buying in the US, where we’ve seen a slowdown in both activewear and non-activewear — or what I would call the fashion market,” says Matt Powell, a sports industry analyst at NPD Group. “While things have slowed up a bit, activewear is still outperforming the fashion market.”

Much of the market opportunity that remains is to be found in the “sports-inspired” apparel category begrudgingly known as athleisure, a lazy term that evokes the same sentiment about the consumer who wears it. In the US, athleisure — clothes that are inspired by performance gear and often made with the same fabrics used for traditional workout wares, but not solely intended for physical activity — will grow more quickly over the next five years than any other subcategory and surpass $31 billion in sales by 2022. (Globally, pure performance gear maintains a slight edge.)

Fitness-inspired fashion is where brands like Athleta shine. The retailer, like its biggest competitor Lululemon, may be best known for performance leggings. But unlike Lululemon, which continues to grow despite multiple public-relations snafus and a sentiment that its product is not evolving as quickly as it needs to, Athleta has seen success moving into the straight-fashion market with its “Sculptek” denim.

Launched last fall, the stretchy jeans are made from a fiber used in the brand’s traditional activewear. (It’s now a top-10 selling product.) Athleta says the jeans are a hit because they deliver on their promise to offer the look of jeans with the comfort of a pair of leggings. “With technology, we think about where there is true added value,” Athleta’s Green says. “It has to be meaningful for her.” 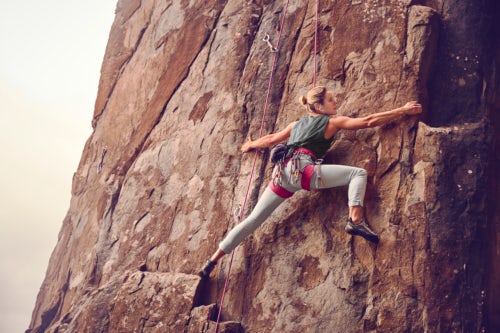 It’s not just activewear brands turning to technology to tap the athleisure opportunity. Traditional “fashion” retailers are increasing their performance and performance-inspired offerings at a record pace, up 236 percent over the past three years — from 8,002 styles to 26,897 — according to data from retail technology company Edited that included 38 retailers across multiple price points (from Forever 21 to Matches Fashion).

New, more focused entrants may be poised to benefit the most. While Outdoor Voices continues to attract the most attention in the activewear start-up space — raising $57.5 million to date from high-profile investors including Mickey Drexler and A.P.C. — other players, like Canada’s RYU and Australia’s The Upside, which both recently opened retail stores in New York City, have managed to carve out a market niche by offering product that is both fashion-forward and technically credible.

RYU, for instance, has distinguished itself through its accessories — minimalist gym bags and backpacks — sold alongside pared-down activewear and casualwear. “Nobody needs apparel just to have apparel,” says chief executive Marcello Leone. “There is a movement toward the hybrid between athletic and street and lifestyle.”

The Upside has targeted the luxury consumer with conversational prints and runway-inspired silhouettes. “Our girl is very much a fashion girl,” says chief executive David Bush, who explains that the brand thinks of product in terms of two categories: active and recovery. “It’s much more of a lifestyle focus, not just about black compression tights. We live very much in the space of to-and-from the gym.

Small upstarts such as these have room to grow. But they may also have a competitive advantage in the eyes of the consumer because of their focus. Consumers today are after specificity: they want to purchase products that meet their exact needs. “In 2018, small is the new big,” Powell says. “There’s opportunity, but they’ve got to make credible product.”