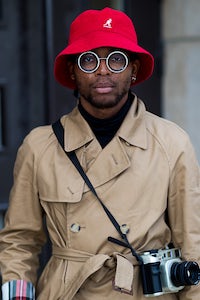 PARIS, France — Popular street style photographer Nabile Quenum, known by his blog’s name, J’ai Perdu Ma Veste (French for "I lost my jacket") passed away in his Paris apartment over the Christmas holidays from what is believed to be carbon monoxide poisoning, according to French provincial newspaper, Le Journal de Saône-et-Loire.

Known for his humour, positive attitude and fashion-forward style, Quenum was one of the most recognisable faces in the growing crowds of photographers camped outside major fashion shows and attracted an Instagram following of over 200,000 people. He was a frequent contributor to GQ, Vogue and New York Magazine. He also worked for titles like CR Fashion Book, Hypebeast and Self Service, as well as commercial clients such as Louis Vuitton, H&M and Adidas.

In September 2017, Quenum became a member of the #NoFreePhotos movement, an unofficial union of more than 40 street style photographers protesting the use of their imagery by influencers and brands, who failed to compensate them. “It's not regarding revenue, it's about the respect of the guys in the street shooting all day, trying to recreate the atmosphere around the shows, in the best way they can,” wrote Quenum in a post on his personal Instagram account in September 2017.

The news of Quenum’s passing shocked many of his industry peers. Below, editors, influencers, fellow lensmen and more paid tribute to the photographer on social media.

Scott Schuman, photographer, The Sartorialist: “Nabile was a ball of energy at every fashion week, you never had to ask if he was at a show because you could feel his presence… he was a glue that helped hold the street style community together."

Adam Katz Sinding, photographer, Le21eme: “As soon as I got to know him I admired him for his passion as well as his work ethic; we’ve shared countless nights of sifting through days’ worth of images until dawn.”

Bryan Boy, influencer: “You left us way too soon. Thank you so much for all the wonderful photos over the years. It's always so lovely seeing you around the world wherever fashion took us. You're truly one of the very best.“

Stavros Karelis, founder, Machine-A: “I will always remember you being that kind person with a big smile, an exceptional style and one of the best photographers out there...”

Yasmin Sewell, vice president of style and creative, Farfetch: “Nabile was always one of the sweetest photographers on the street. Sending love to all his friends and family.”

Lee Oliveira, photographer, The New York Times: “Today is a sad day for street style. We lost a very dear and esteemed friend to all of us. Rain, hail, shine or snow, he was always buzzing around fashion week working as hard as he possibly could, with a smile and his music box.”

Samuel Ross, founder, A-Cold-Wall: “Your kind spirit was a gift to us all. A true talent and good human being. A key figure of Paris Fashion Week.”

Tamu McPherson, influencer: “You left a lasting impact on everyone that you met. You always kept it real. And, oh the laughs. I can still feel them. Love and always love little brother. Will miss you on those streets.”